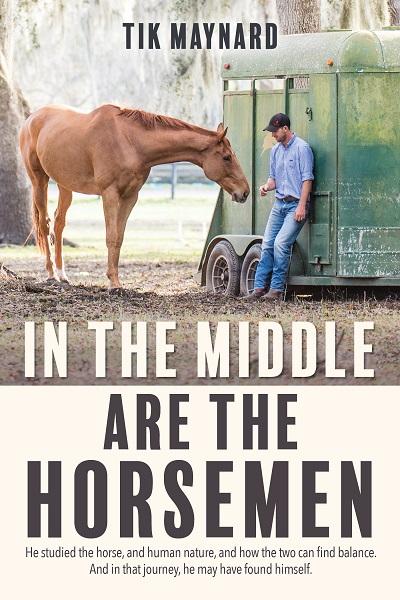 I’d like to think that I’ve enjoyed a truly cross-disciplinary equestrian background: I started riding huntseat equitation at a local 4H barn as a kid; then dabbled in western riding and gymkhana; learned the art of reining and got my first taste of reined cowhorse in college; worked on a ranch in Wyoming starting horses and driving cattle; spent several years as a professional teacher, trainer and coach in western and draft horse driving while continuing some training over fences; left the competition world completely to ride on the family farm; and have made a return to the show pen with my racehorse-turned-ranch horse. This is not to brag on how experienced I may or may not be — this is simply for context.

In this array of experiences and interactions, including several brief working student positions crammed into college winter breaks between semesters, I’ve gleaned immeasurable amounts of information. Every trainer with whom I’ve worked has left an impression on my overall horsemanship (both positive — “I want to be like that horseman” — and negative — “I will never ask that of/do that to a horse”) in the same way I’ve learned from every horse which has come through my life. Yet I’d have a hard time defining myself as any one particular school of horsemanship.

Tik Maynard’s In the Middle Are the Horsemen chronicles his own multi-disciplinary journey, driven by an insatiable lifelong thirst for knowledge and the desire to be the best horseman he can be. This quest is initially focused on being a great rider, but as Maynard gains more experience abroad and around the United States, his goal shifts almost imperceptibly towards being a great horseman — the kind of person a horse would choose if a horse had the option.

Maynard is humble throughout, still thinking of himself as working towards that goal of horseman (“a horseman, however, goes deeper, thins about the heart and soul of the horse, as well as the body. A horseman not only knows his horse, but his horse knows him — this is a true relationship”), nowhere near attaining Horseman(“working on himself for the horse, not the horse for himself”). In a truly rare feat in today’s perfectly-presented world, Maynard is honest about his mistakes, unafraid to describe in detail all of the various times he — like all of us — made errors in judgment or just simply failed.

The book itself takes us along on Maynard’s working student adventure: at a personal crossroads in his life at the age of 26, Maynard leaves the comfortable home base of his parents’ horse farm in Vancouver to travel as a working student around the world, landing positions with some household names in dressage (Johann Hinnemann), eventing (Ingrid Klimke and the O’Connors) and show jumping (Anne Kursinski, and very briefly Ian Millar), as well as some time on a ranch in Texas with Bruce Logan. Working for Sinead Halpin for a weekend would prove to be a fateful meeting; the book chronicles their romance and partnership as well as some major life events.

While writing one’s own story may seem like a breeze — you’ve already lived it, so it’s not like you’re creating new characters or plot out of your own imagination, right? — the process requires some serious self-awareness and reflection, not to mention a thick skin. Maynard, documenting his early working student experiences for first Gaitpost and then Chronicle of the Horse learns this lesson early with one particular response to his tale of working for and summarily being fired by Johann Hinnemann in Germany: it takes a brave person to bare their soul on the page, at the mercy of readers and critics.

So many parts of this book spoke to me not only as an equestrian but as a writer who has chronicled my own experiences for readers and similarly struggled to find my niche as a rider and a professional. A few passages in particular stood out to me.

On writing one’s own story — it’s never just your own story once pen meets paper:

It is often easier to see and evaluate emotions in someone else — we are so close to our own! […] My writing, my articles, were never meant to be a definitive look at horse people and their training methods. They were only meant to be my story.

On quitting — a debate I still have with myself over leaving the industry as a professional:

Time was giving me perspective on my stay with Herr Hinnemann, but I still had more questions than answers. Why did I stay as long as I did when I was unhappy? Should I have stayed even though I was unhappy? Would I have had the courage to leave his stable if I hadn’t have been dismissed? It’s a curious thing: Sometimes it takes more guts to quit a job, no matter how unsatisfying it is, than to stick with it.

On Thoroughbreds and what they can teach us:

But then again, maybe it wasn’t about the horse. Probably I just needed to ride better.

Any equestrian who has ever wrestled with what it means to be a horseman will find value in this book. Tik Maynard’s In the Middle Are the Horseman is available through Trafalgar Square.