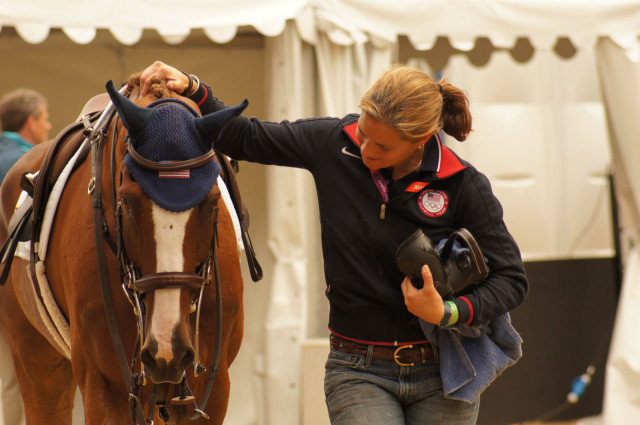 Super groom Max Corcoran was carrying a bag of ice to her equine charges when Katherine Cooper approached her at Millbrook Horse Trials to ask if she would consider becoming the next president of the United States Eventing Association.

Katherine, who chairs the USEA Nominating Committee, explained the idea behind nominating Max was a simple one: because she knows all aspects of the sport. Max got her first job as a groom working for Bobby Costello at the tender age of 12 and competed on catch rides during the long format era.

She started working for Karen and David O’Connor in 2001 and spent the next decade grooming at the Olympic Games, World Equestrian Games, Pan American Games, and major events throughout North America and Europe.

Along the way, Max acquired a wealth of knowledge and is considered one of the foremost experts on horse management in the world. She continues to groom at events on a freelance basis, and also works as an event organizer for competitions such as The Fork Horse Trials at Tryon and the Ocala Jockey Club International Three-Day Event.

“The USEA figured all of that was a good balance,” Max laughed. She will shadow current USEA President Carol Kozlowski during 2019 before officially taking up the role in 2020 for a four-year term.

As to her vision for what she would like to accomplish as USEA president, Max said she will bring a “horses first” mission to the table in seeking to promote increased education about equine care in eventing.

“Anyone who knows me knows me I am really passionate about horsemanship. We are losing that a bit in the sport because of time constraints,” Max said. “Professionals are teaching their students to ride and not how to take care of their horses, but people are still hungry for that knowledge.”

On a broader spectrum, Max said she hopes to not only promote equine welfare but also kindness to fellow competitors in the sport.

“Our world is a little but of an ugly place right now, and people are quick to turn on each other. Something I notice between the show jumping and eventing crowds is that the show jumpers are pretty excellent to each other. They all watch, they all learn, they all ask each other questions, they all give each other advice — and they really mean it,” Max said.

“I feel like in eventing you get shunned a bit when you have a bad day, instead of someone walking by and saying, ‘Sorry about that. Is there anything I can do to help you?’ I feel like we miss that a bit in the sport. I think for us to truly support each other as competitors would be great for the lower levels on up to the top of the sport.”

Carol will officially pass the baton to Max at the 2019 USEA Annual Meeting & Convention in Boston, which will be held Dec. 11-15, 2019. As a native of Massachusetts, Max has assured me she intends the convention to be a serious celebration showcasing New England pride. The 2019 USEA Convention is sure to be an unforgettable weekend, as it will also mark the organization’s 60th anniversary.