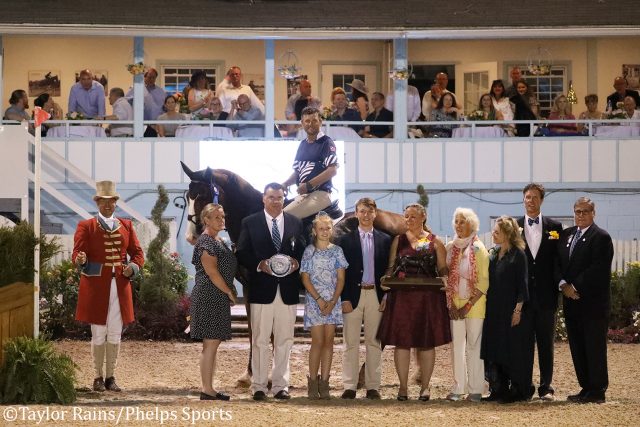 Boyd, who lives in nearby Cochranville, has competed in the class every year since it started in 2017, and he topped the podium for the first time with a gutsy inside turn in the jump-off and the fastest time of 73.30 seconds.

Contestor, a 12-year-old KWPN gelding (Contango X Jer’s Princess, by Killer Jer), finished eighth last year at Devon with a rail down in both the first round and the jump-off, but he rose to the occasion last night to deliver one of only three fault-free performances. 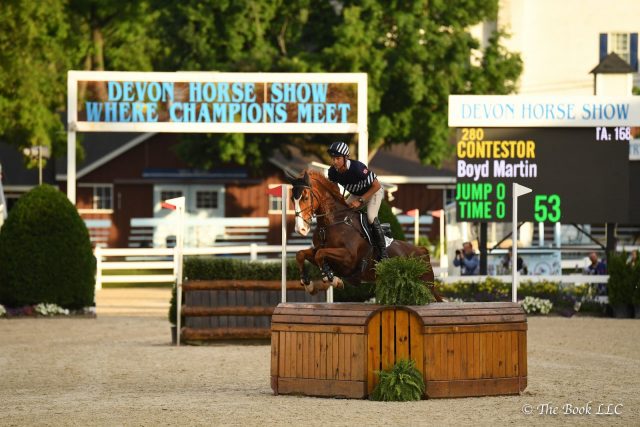 Boyd Martin and Contestor. Photo by The Book LLC.

“He’s sort of had an up-and-down career, but he’s just a really good boy. I’m lucky because he’s an ultimate trier. Tonight he was a home run, and I’m thrilled with the way he went. I think it’s good having a mixture of cross country and show jumps for him, just because he likes that forward ride,” Boyd said.

“I’m so pleased for the owners, who are also the breeders. They’ve been wonderful supporters for me through good times and bad times and stuck right by me, so I’m more thrilled for them to be honest because they really love this horse. He’s like a pet to them, and to win a big class like this is huge.”

Boyd said it’s a privilege to compete at the prestigious Devon Horse Show and added he hopes the arena eventing class, sponsored this year by Saltworks and Doug and Cindy Howe, will continue to run.

“It’s good for us eventers to have this class,” Boyd said. “It’s a bit of pressure, a big crowd, warming up in the dark and the shadows everywhere. It takes us out of our comfort zone, so I think it’s good for us.”

Capt. Mark Phillips’ course included 26 obstacles for the first round spread across 1,100 meters in the Dixon Oval and Wheeler Ring. Just five of the 30 combinations in the field delivered fault-free performances in the first round. 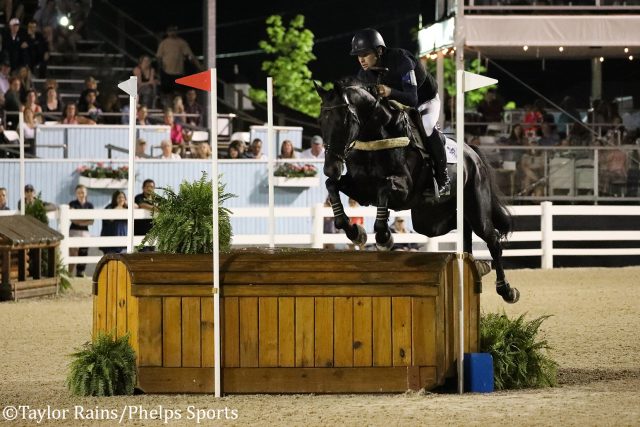 The top 12 after the first round all returned for the jump-off. Last year’s winners, Chris Talley and Sandro’s Star, were one of the three pairs to jump fault-free across both rounds. The 11-year-old Oldenburg stallion (Sagnol X Poetic Patter xx, by Nostalgia’s Star xx) owned by Hannah Salazar blazed around the jump-off in a time of 73.94 seconds to secure second place.

Buck Davidson was very late arriving to the venue last night due to his flight being delayed, so he had mere minutes to learn the twisty course and warm-up his first mount, Gaya, before starting his round.

A reshuffled order of go then had Buck go last in the first round with his second ride, Carlevo. The 12-year-old Holsteiner (Caresino X Ramatuelle, by Levernois) owned by Carlevo LLC delivered the fastest fault-free performance in the first round to top the leaderboard. A clear jump-off round but a slower time of 74.92 seconds saw Buck and Carlevo finish third. 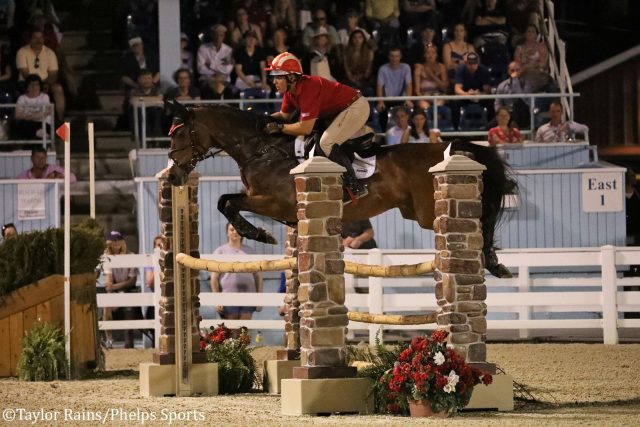 Jennie Brannigan and Tim and Nina Gardner’s I Bella added just 1 time penalty across both rounds to finish in fourth place. Jules Ennis Batters and Cooley O added 2 time penalties to finish fifth. Hannah Sue Burnett and The Lukeswell Partnership’s Lukeswell delivered the fastest time in the jump-off, setting a blistering pace of 71.15 seconds, but had the last fence down to finish sixth. 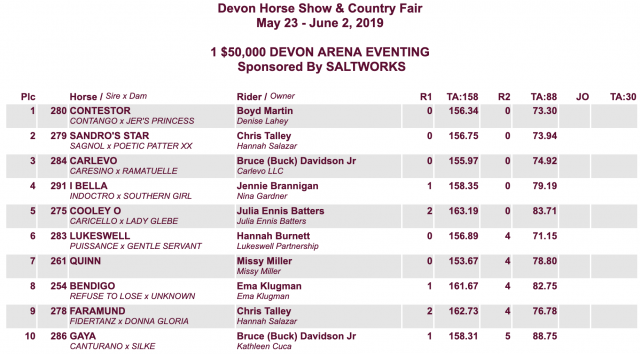