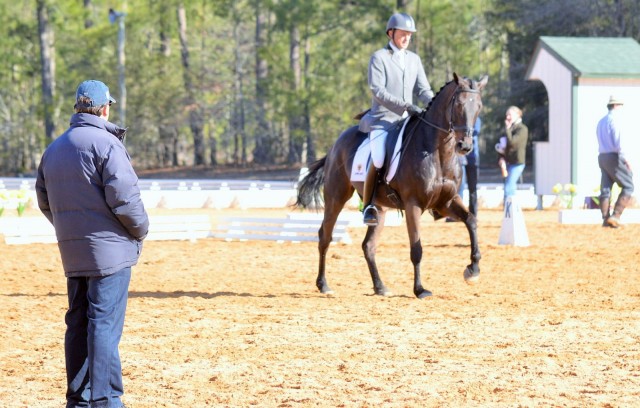 Boyd warms up Shamwari 4 under the watchful eye of David O'Connor. Photo by Sally Spickard.

Boyd Martin and the Shamwari Syndicate’s Shamwari 4 were on their A game this morning. I was able to see the tail end of Boyd’s warm-up with David O’Connor, and I overheard Boyd remark that Shamwari’s changes were beautiful so far. The horse continued to warm up wonderfully, and looked ready to put on a show in the dressage arena.

Shamwari did not fail to disappoint, and Boyd piloted him to score a 25.9 to lead the division currently. There are still a few riders left to ride the Advanced dressage today, so Boyd may have some late challengers.

Two other pairs have so far cracked into the twenties as well: Lauren Kieffer and RF Cosmina (27.7) and Courtney Cooper with Who’s a Star (29.1). The scores are still coming in, so the final dressage results are still pending.

Here is a video of Boyd and Shamwari’s dressage test: