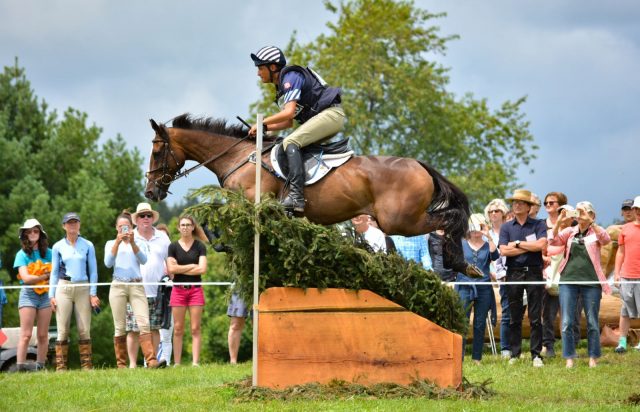 Cross country day at the Millbrook Horse Trials proved that this event isn’t a dressage show and just how extremely influential time penalties alter the leaderboard. Storms overnight and in the early morning left for a stickier track causing several combinations to ride conservatively.

Boyd Martin, however, was absolutely on fire today and in it to win it on every horse at every fence. He took the lead not only in the Advanced division, but both Intermediate A and Intermediate B. Boyd had four horses in the Advanced and was storming around with Steady Eddie, owned by Denise Lahey, Pierre Colin, and George Wintersteen, as the last rider on course when the commentators joked how it seems like you were seeing him on a new horse every five minutes. 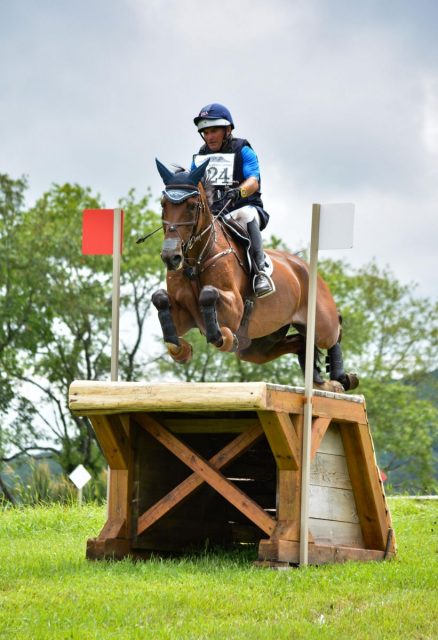 Boyd and “Eddie” tied Tim Bourke and Luckaun Quality for the fastest ride of the day, picking up only 2.0 time penalties a piece. That was enough to move Boyd and Eddie all the way from seventh to take the lead on 33.9. Boyd also sits 14th with Tura Lura, 17th with Bonito and 31st with Long Island T.

Moving up from fourth to take second was Sara Kozumplik Murphy and the Rubens D’Ysieux Syndicate’s Rubens D’Ysieux. They picked up 8.4 time and had a great, bold run over a track with a lot of terrain. They go into the final phase on 38.1 leaving Boyd with a single rail in hand. 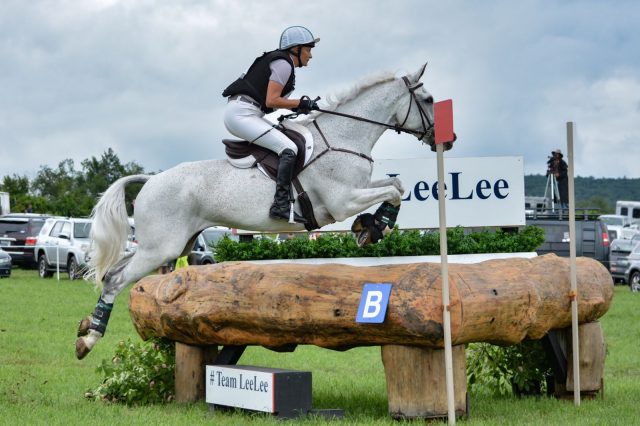 Phillip Dutton was another to be busy with four horses in the Advanced. He is placed highest after cross country riding the Revelation Group’s Fernhill Revelation. Phillip and “Warren” added 6.0 time penalties to their score, moving up from eighth place with a 38.2, putting the pressure on Sara and Rubens.

Phillip is also seventh with I’m Sew Ready and 13th with Z, but had two frustrating runouts at the triple brush chevron after the water with Mr. Candyman, who had been third after dressage.

The top two after dressage jumped clear but sadly picked up more time penalties than others, dropping them well down leaderboard. Lynn Symansky and Donner had 12.4 time while Emily Beshear and Silver Night Lady had 13.2 time. 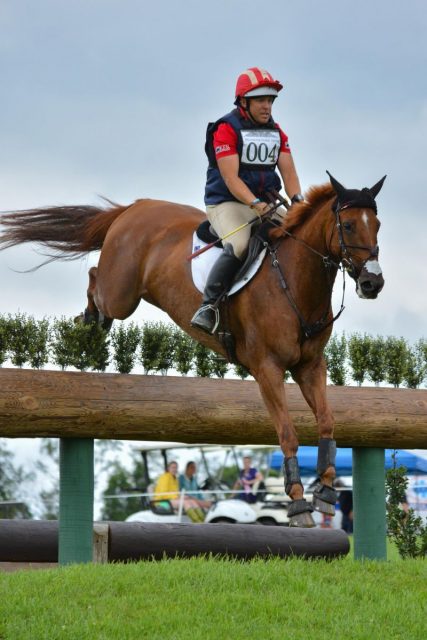 Moving into fourth is today’s trailblazers Buck Davidson and Copper Beach, owned by Sherrie Martin and Carl and Cassie Segal, adding 5.6 time penalties to move all the way from 12th on a two-phase score of 39.0.

Rounding out the top five is Jenny Caras and Fernhill Fortitude. They ran clear and fast picking up just 3.2 time and just 0.1 penalties behind Buck and Copper Beach. Jenny and “Forty” show how much the clock shook up the standings, catapulting ahead from 17th.

The scores are rather tight and it will be interesting to see how things pan out tomorrow after such a lengthy course. Some tired horses may change the standings with time penalties and rails. 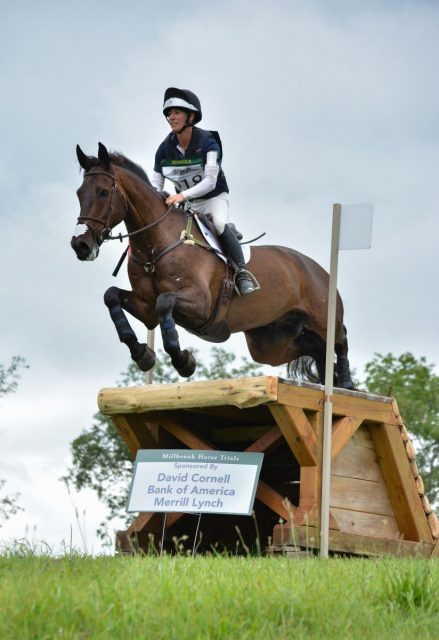 In the Intermediate A and B divisions time again was the biggest factor and swapped both the leaderboards around. Taking the lead in division A was Boyd Martin and Denise Lahey’s SBF Cortez, picking up just 0.4 time to move up from second.

Now sitting second is Allison Springer and the Lord Willing Syndicate’s Lord Willing, who picked up 3.6 time to drop down one placing from their lead after dressage. Third is Phillip Dutton and Fernhill Singapore, owned by Sue and Shawn Foley, Tom Tierney and Annie Jones, who moved up from seventh with 2.4 time. 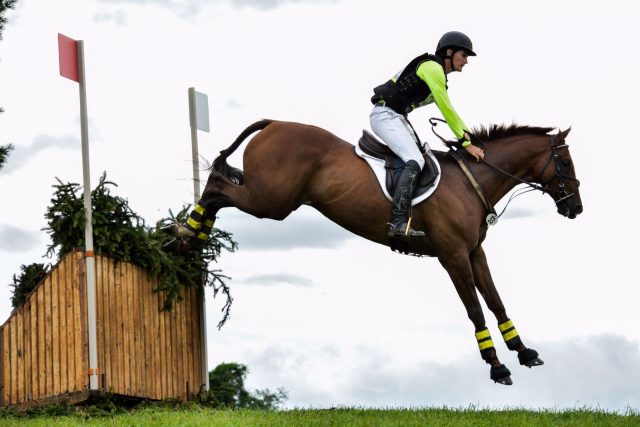 Woods Baughman and Montesquieu. Photo by Miranda Akins/Photography In Stride.

There has to be a special shoutout to Woods Baughman as the only rider to go double-clear between both Intermediate divisions and the Advanced. He and Montesquieu, owned by Woods and James Baughman, wasted no time between fences and were very bold on course. His clear round brought him from 26th after dressage to sixth place before the final phase. Congrats Woods! 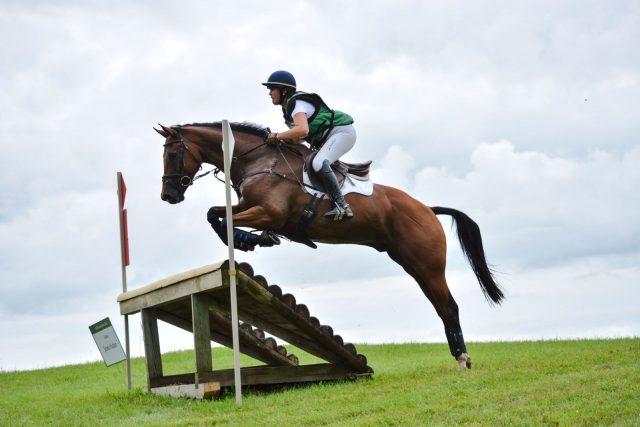 Kylie Lyman and Lup the Loop. Photo by Miranda Akins/Photography In Stride.

In the Intermediate B division, Boyd Martin took over the lead with Club Contessa’s Contessa, picking up just 3.6 time and moving up from fifth. Moving into second was Kylie Lyman and Joan Nichols’ Lup the Loop, moving up from third with 9.2 time. Taking third was Kristin Bond and Liz Bond’s Enough Already; they had 5.6 time to move up from tenth.

Overall it was a great day with very few problems but influential time penalties. It will be an exciting day for show jumping tomorrow. Go eventing. 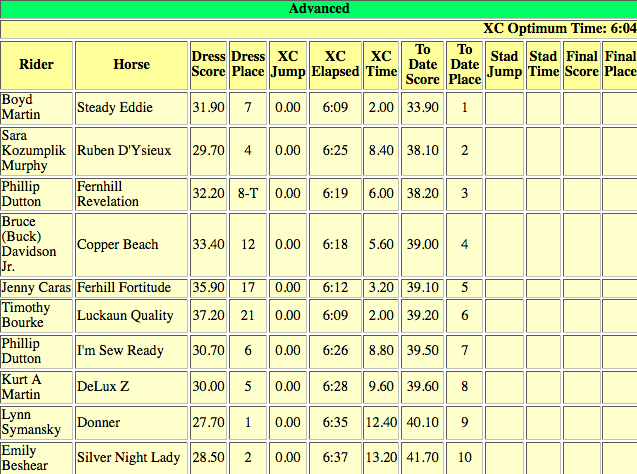