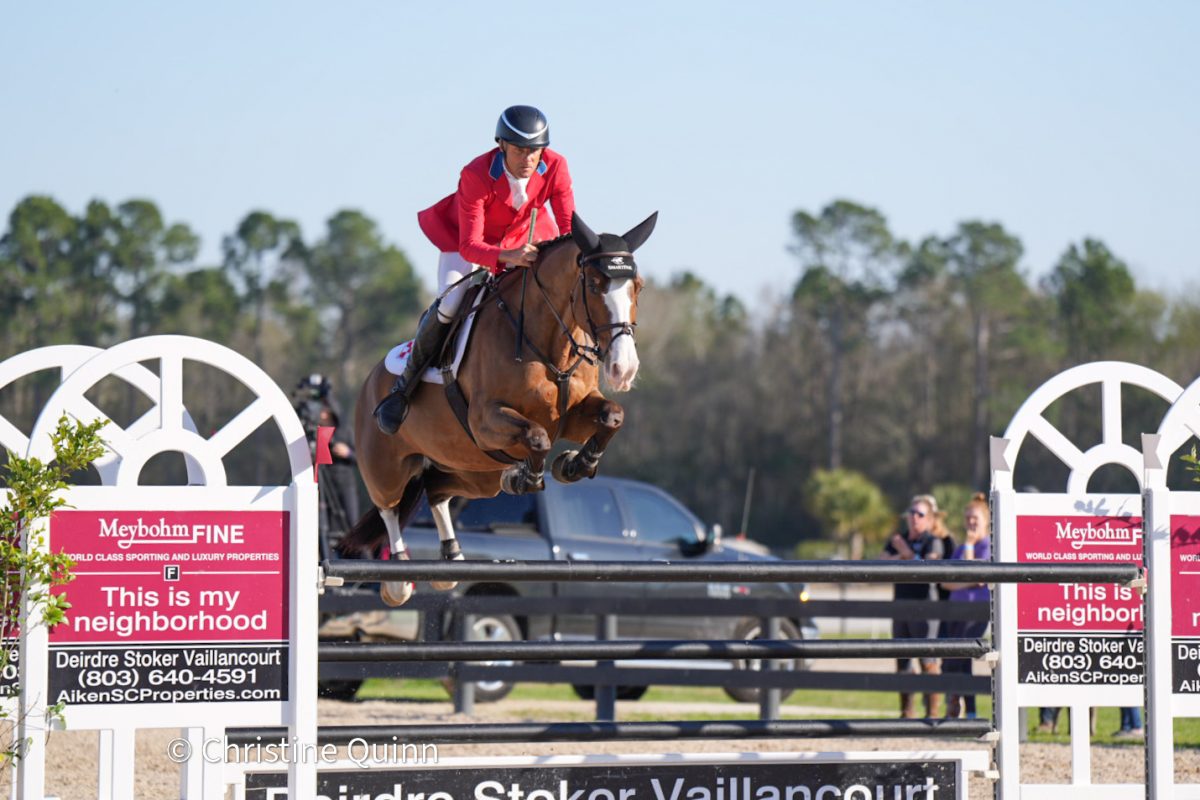 Boyd Martin and Fedarman B. Photo by Christine Quinn Photography.

It didn’t take long for Maryland 5 Star winner Boyd Martin to show us how few beats his horses had missed in the off-season, taking early charge of the $50,000 Grand-Prix Eventing at Bruce’s Field to sit in first and second place with Fedarman B and Tsetserleg, respectively.

While it’s early days in the season at this point, the Grand-Prix Eventing is known for giving the eventing public a preview of some top and rising Advanced pairs as they ramp up for their various spring destinations. $50,000 in prize money and a hearty team charity competition don’t hurt, though, and Boyd Martin’s looking for a “proper crack” at Captain Mark Phillips’ cross country tomorrow afternoon.

“Both the boys jumped well,” Boyd commented following his show jumping round aboard the Christine, Thomas and Tommie Turner’s Tsetserleg (Windfall – Thabana, by Buddenbrock). The Tokyo Olympians lowered one rail in the final combination of Michel Vaillancourt’s technical track to drop into second place on a score of 28.1. “It’s a big course, good crowd here…The little guy’s getting better I think. The last six months we’ve actually gotten better and better. He’s a seasoned veteran and obviously one of the favorites in the barn, so I think we’ll have a good crack this weekend.”

Tsetserleg had earlier won the dressage portion of the Grand-Prix, judged by 2022 WEG officials Peter Gray and Christina Klingspor, looking like his well-earned break post-Olympics and winter of practice really suited him.

Stepping up to lead the way overnight is the Annie Goodwin Syndicate’s Fedarman B (Eurocommerce Washington – Paulien B, by Fedor), who came into Boyd’s program after the tragic loss of Annie Goodwin in a schooling accident last year. Boyd spent the latter part of 2021 getting to know “Bruno”, who is 12 this year, just beginning to test the Advanced waters now. Annie’s family and friends had the opportunity to come and watch this weekend, and tomorrow Annie will be remembered during a ceremony prior to the start of cross country. 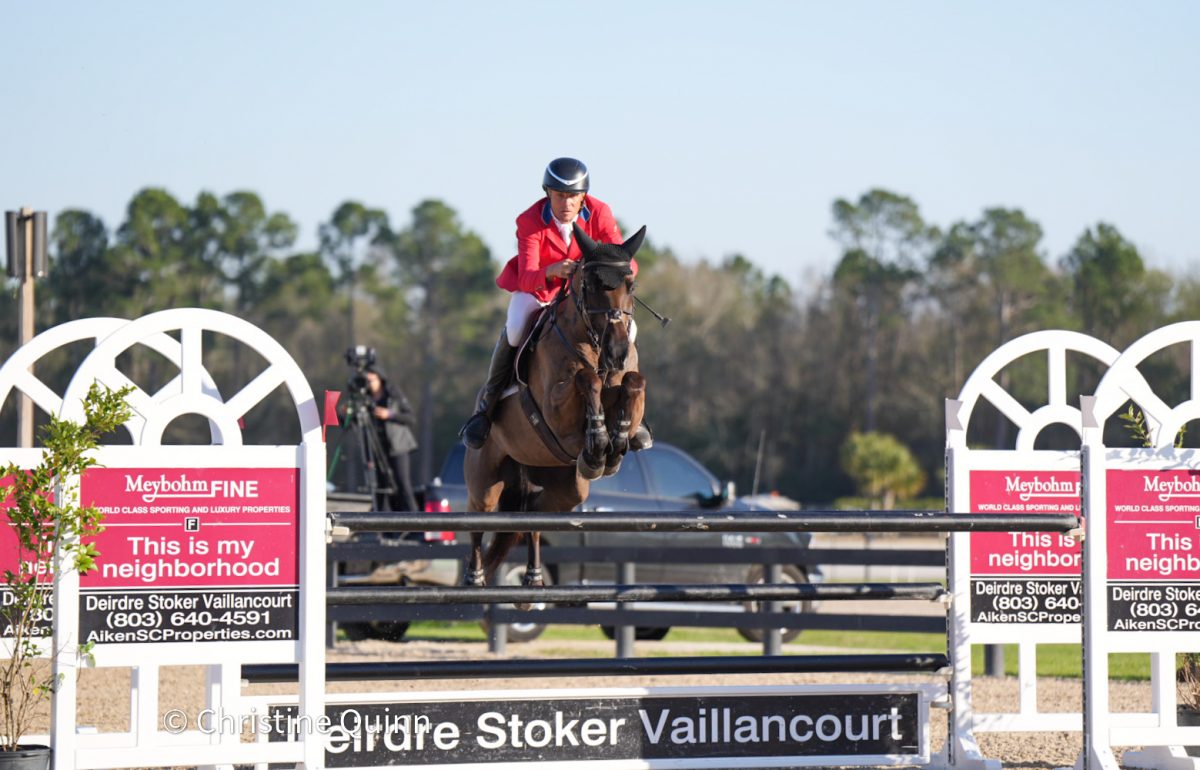 “He’s a wonderful horse,” Boyd told Frankie Thieriot-Stutes this afternoon. “Annie was a wonderful person in this community and I was lucky enough to help her a bit in her jumping training. It’s a privilege and honor to ride Bruno. We’re still getting to know each other, I’m very happy with the way he’s going. I had dinner with [Annie’s family] last night — they’re a great group of people and they love this horse.” 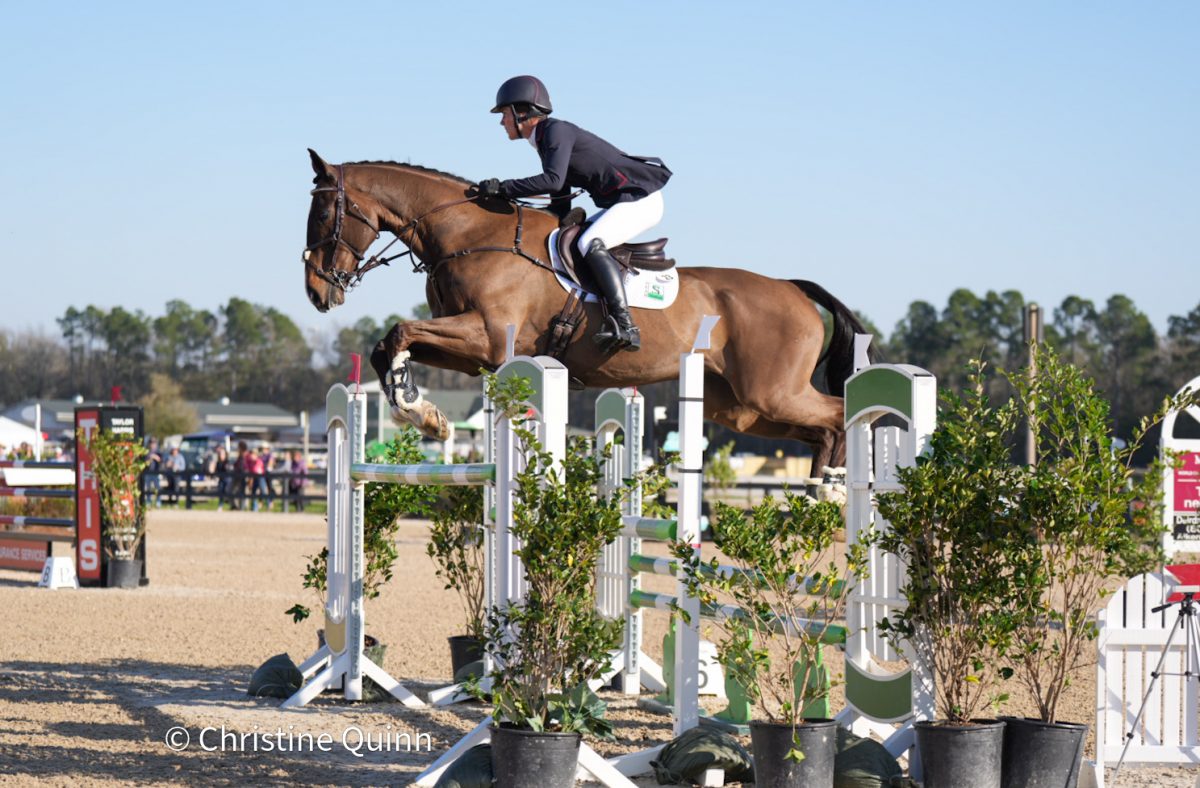 As has become par for the course here at the Grand-Prix Eventing, clear rounds inside the time were scattered: five out of 32 pairs recorded double clear efforts, with another three left the poles up but collected some time. Three pairs were given Compulsory Retirements for having five or more rails.

Ariel Grald was the beneficiary of one clear round, stopping the clock one second late but still moving up from 11th into third overnight with Annie Eldridge’s Leamore Master Plan (Master Imp xx – Ardragh Brash, by Cavalier Royale). They’ll take a two-phase score of 30.2 into tomorrow’s cross country finale.

Cross-country tomorrow at 2:00 and 3:07. Monty is getting in the zone with his well-deserved BEMER therapy.

Canada’s Colleen Loach and Peter Barry’s Vermont (Van Helsing – Hauptstutbuch Hollywood, by Heraldik xx) remain in fourth place after two phases, adding one rail to their dressage score for a total of 30.9. Colleen’s second ride, FE Golden Eye (Goldfever – Cascade, by Contendro) is also in the top 10 after today, in seventh with a score of 33.1.

Sitting in fifth and sixth overnight will be Tokyo Olympian (we’ve got the full squad in action here this weekend, save reserve rider Tamie Smith!) Doug Payne, with his and Jessica Payne as well as Susan Drillock’s Quantum Leap (Quite Capitol – Report to Sloopy, by Corporate Report) rocketing from 15th into fifth on a score of 31.9 thanks to a customary Doug Payne rapid clear round. We also see the ever-elegant “Ginja Ninja”, Laurie McRee, Catherine Winter and the Paynes’ Starr Witness (Chello III – Carmen, by Veneur) in sixth place, adding one rail for a score of 32.7. Doug’s Tokyo partner, Debi Crowley’s Vandiver (Windfall – Visions of Grandeur, by Mystic Replica xx) sits in 11th on a score of 35.6.

Returning to the U.S. for a quick clinic tour and a spin around the Grand-Prix is Great Britain’s William Fox-Pitt, who caught a ride on Sara Kozumplik’s newest partner, Rock Phantom (Spirit House xx – Ballycroy Rose, by Clonakitty Hero), owned by Edy Rameika and The Unicorn Group and formerly piloted by Brazil’s Nilson Moreira da Silva. William made the 11-year-old Irish Sport Horse’s dressage look like a walk in the park, which would be enough to earn a 29.5 and early top-10 positioning after dressage, but a handful of poles down would knock them back in the standings. Nonetheless, William’s just happy to be here having a bit of fun.

“It’s great to be back, fantastic to be invited back and I’ve been lucky to have been given a nice horse to ride,” William told Frankie following his dressage ride. “What a show they put on, this is a real credit to the team, great for sponsors and owners, and a real good kick start to the season.”

As for catch-riding? It’s old news for William. On top of his vast experience at the top of the sport, he’s also come over to the U.S. for several of these condensed format competitions: he’s competed here at this Grand-Prix, as well as at the Wellington Eventing Showcase and the Arena Eventing competition at Central Park Horse Show.

“I’m very lucky, I’ve grown up riding lots of different horses and I’ve ridden in America two or three times,” William said. “You’ve got to think ‘this is a normal day, a normal horse,’ and as I always like to say, just get on with it!”

Tomorrow we’ll see the cross country phase of competition, running in reverse order of standing. You can get an idea of the track Capt. Phillips has laid out on CrossCountryApp here. 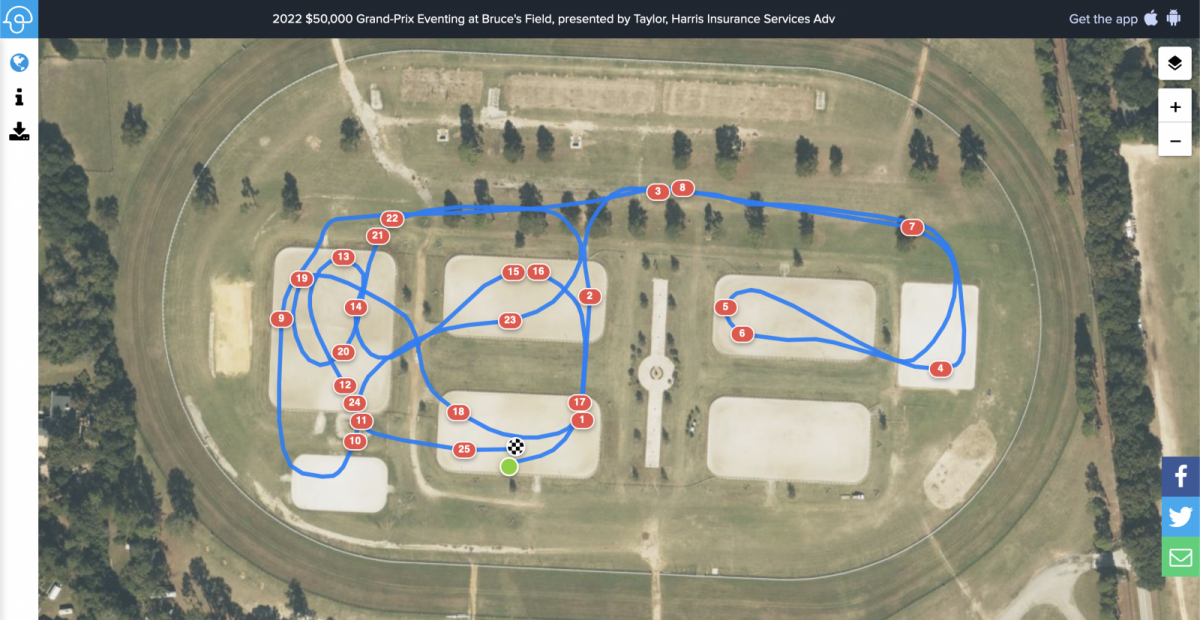 Click the image to view a fence-by-fence preview on CrossCountryApp.

You won’t want to miss the exciting cross country, and you don’t have to miss a second thanks to a live stream provided by Horse & Country. In order to access the stream, you must be a H&C+ subscriber (if you’re a new subscriber, you can receive a free trial period) — and it’s a good time of year to sign up as the slate of eventing coverage to come in 2022 is full of great action — click here to learn more and sign up. For those attending in person, tomorrow morning features a full slate of activities, including a course walk with Boyd Martin, a Retired Racehorse Project demo, a demo from Double Dan Horsemanship, a memorial for Annie Goodwin, and much more.

Riders are also competing for charity this weekend in a team competition benefiting a variety of Aiken-area organizations. This year’s beneficiaries are the Community Medical Clinic of Aiken County, Aiken County Pony Club, Brothers & Sisters of Aiken County, Megiddo Dream Station, Great Oak Equine Assisted Programs, and Tri-Development Center of Aiken. You can support your favorite team by donating as little as $5 here.