Since Boyd Martin will be grounded for quite awhile after breaking his arm and undergoing surgery, he donated his time to Plantation Field this past weekend as a dressage judge for the fall starter trials. EN correspondent Colleen Peachey also volunteered at the starter trials and caught up with the riders who had Boyd as their judge. How would YOU react to Boyd being your judge? 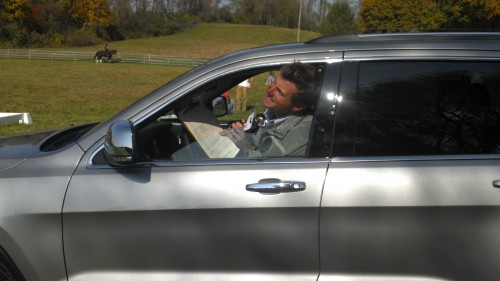 Now that November has arrived, most folks have come to expect things like colorful fall foliage, pumpkin-spice flavored everything and Thanksgiving coming up just around the corner. However, for those of us in the eventing community of Chester County, Pa., it means our season is winding down, and the last few starter trials of the year are being held.

Just this past weekend, I volunteered at the starter trial sat Plantation Field in Unionville. It was an absolutely picturesque day — crisp weather, rolling hills, beautiful trees, well-groomed horses riders in costumes and … wait, was that Boyd Martin? No, I wasn’t just seeing things. Boyd himself attended the Plantation Fields Starter Trials, putting in a guest appearance as a dressage judge.

I can probably guess what is running through some of your minds right now — something to the effect of “OH MY GOSH, can you IMAGINE being judged by a famous four-star rider at a starter trial!?” When I first heard the news that Boyd would be judging, images flashed through my mind — young riders turning pale and shaking in their boots sweat rolled down their faces and some perhaps looking like they might just fall right off the side of their horse.

I simply had to find out for myself what the reaction was from the young riders whose dressage tests were judged by non other than Boyd himself. I was a little surprised at the feedback I received:

1.  The “OH MY GOSH” (But I Still Have Nerves of Steel) Crowd: The initial reaction that I got when catching riders coming out of Boyd’s ring was “I rode for Boyd Martin. OH MY GOSH!” The reaction was followed by a sense of excitement, and I really couldn’t detect a hint of nervousness. At ALL. We’re talking about some fearless young riders here. Can you say nerves of steel?

2.  The “I’m SO Excited” (And I Truly Just Can’t Seem to Hide it) Crowd:  The next reaction that I got was one of general excitement. No nerves. No fear. Just excitement. Which carried over to the fact that now the riders would have Boyd’s autograph … on their dressage tests!

3. The SURPRISE Crowd: The final reaction that I got was one of shock and awe. Yes, believe it or not, there were some riders that were not told by whom they were being judged before they went into the ring. This might have been the safest plan for some. Personally, thinking back to myself as a young rider at my first shows, I don’t think I would have wanted to know ahead of time if I was being judged by a famous four-star rider.

I was a little surprised — and maybe a very small part of me was a little disappointed — that I didn’t see any riders look like they wanted to fall off their horse OR dismount and run over to the bushes after their ride. Not even one! With Boyd’s presence in the dressage arena, things seemed to run smoothly, like you would expect at an organized and well-run starter trial.

So on the flip side, what was Boyd’s reaction to judging a starter trial?  Here is an internationally famous rider who is used to consistently riding a talented string of horses at the upper levels. What did he have to say about his experience — which turned out to be his first time ever judging?

According to Boyd, he was definitely honored to be asked to judge at Plantation, and he expressed how different the view from sitting in the judge’s seat was from sitting in the saddle with your horse’s ears in front of you. I got the impression that this was a different sort of experience for him; as someone who is used to a “get up and go” mentality, sitting for hours on end to judge dressage tests was quite a change of pace.

He told me that he did not hold back on his scoring, but I got the feeling that he was quite fair about it; 10s were reserved for “moments of brilliance,” and the odd 3 or 4 appeared when there were “acts of disobedience.” Like the rest of the crowd, he also seemed to enjoy the laid-back atmosphere, which included many Halloween costumes. I saw everything from riders dressed as Superman (complete with cape) and Bat Girl, to costumes including Rainbow Bright, Peter Pan, a clown, an angel/devil team, hunter/deer team, a Christmas elf, Thing 1 and Thing 2, and a zebra.

Boyd said that he did have the opportunity to see a handful of “spectacularly talented young horses” that were present. And, in good humor, of course, he jokingly told me that since the majority of dressage judges are known for being “miserable,” that he was hard at work trying to improve the reputation of dressage judges everywhere … while trying not to discourage and crush all of the young riders.

I personally thought it was quite generous of Boyd to donate his valuable time and experience to sit in as a dressage judge at a local starter trial. When I made this comment to him, Boyd acted as though it really was no big deal at all, saying that it was him giving back to the sport as a rider. Thanks to Boyd and to all of the other volunteers for making this a fantastic day at Plantation Field.