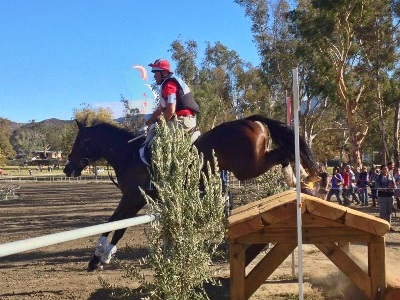 Buck Davidson and Petite Flower, winners of the CCI3* at Galway Downs. Photo by Angela Beal

Welcome to Monday, EN. Galway Downs is a wrap, and many happy competitors are on the way home. Buck Davidson and Petite Flower won the CCI3* by a very slim margin, with Jolie Wentworth and Good Knight taking second, and Elisabeth Haliday-Sharp third aboard HHS Cooley. I know that for many of us the event hangover is kicking in, and the week ahead looks like it’s going to be a long one. While I’m not suffering the direct effects of an event hangover myself, I’m starting to feel a cold coming on. The cure for whatever ails you is the same — lots of vitamin C, something warm to eat and plenty of time to peruse EN at your leisure. Take it easy this morning; this past weekend was one for the record books!

The analysis of the B sample from Clifton Promise will be available mid-November, according to an update posted on the Clifton Eventers Facebook page. “This timescale is a normal part of the legal process currently underway. You will appreciate that neither Jock nor Equestrian Sports New Zealand can make further comment at this stage.” [Clifton Eventers]

Roger, who you may remember from Sex and the City or Law & Order, is set to retire next year. Roger has worked in Central Park for 15 years.  Regardless of your feelings about whether or not horse drawn carriages belong in NYC, this is a sweet story.  Here’s to hoping Roger has a long and happy retirement! [NY Daily News]

Former New Mexico governor Bill Richardson has vowed to fight the federal ruling that will allow horse slaughterhouses to reopen.  The horse slaughter debate in the US  is a very emotional one and hotly contested to boot.  Much of the recent developments center around a lawsuit by the Humane Society and animal protection groups which contended that federal officials had failed to consider the environmental impact. The lawsuit was tossed by a US District Judge and at least one slaughterhouse is doing it’s best to be open for business today. [USA Today]

The All American Quarter Horse Congress is debating a change of venue.  The AQHA’s premiere horse show is mulling over the possibility of leaving the Ohio Expo Center and moving to a new location.  According to show officials, the 360-acre property is no longer sufficient for their competitor’s needs.  The show is the largest single-breed competition and has been hosted at the same location since 1967.  [The Columbus Dispatch]

Jockeys in the 8th race at Bathurst Racecourse in Australia received a surprise when the sprinklers came on.  Sometimes you just gotta stay focused.  The horses carried on, with Path To Freedom winning.  Due to the sprinkler issue non-winning tickets were refunded.  [Deadspin]

Horse slobber is apparently now sue-worthy in Australia.  A protestor who was part of a demonstration claims that the horse stood on his foot and slobbered on him.  Representatives of the Police Association call the lawsuit outrageous. I better lawyer up, my horse is a slobber machine.    [Yahoo! News Australia]

I am an admitted curmudgeon because I honestly don’t like kids, but this is too cute not to share.  Three year old Fenton Kirkland and his pony Toffee were winners of a class of thirty adults.  Seriously, his outfit is awesome.  I think we need to take a look at what UK parents are dressing their kids in for in-hand showing when we start thinking about jog outfits.  [Express.co.uk]

Monday Video: Conan O’Brien was at Santa Anita a few weekends ago and helped out by calling a race.  It was interesting to say the least.