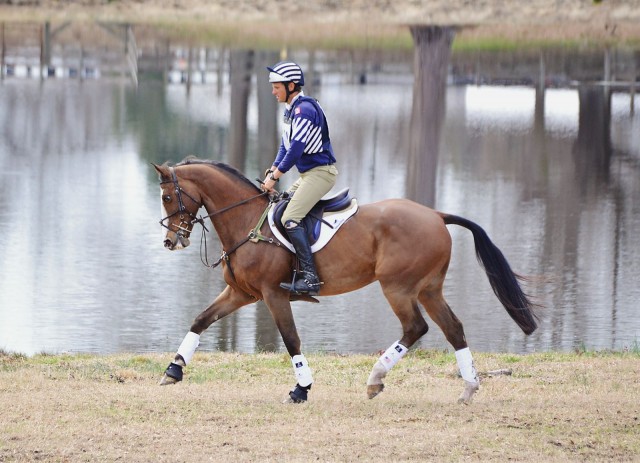 Boyd Martin is back in the saddle full time after breaking his right leg at Carolina International in March. While he is still doing regular physical therapy, he had a successful weekend at Waredaca, clinching the top three spots in the Intermediate division with Shamwari 4, Pancho Villa and Otis Barbotiere.

Boyd had Waredaca on the calendar as a final prep for both himself and his Luhmühlen horses, Shammie and Otis, and was pleased with the result. “All the stars aligned for me because of all the rain we’ve had lately,” he said. “It was the best footing Waredaca’s ever seen, and it was a well designed course for a final run. I felt like I really needed to run the horses at a bit of pace to get used to galloping fences faster on them.

“Otis and Shammie were a bit surprised to be doing Intermediate movements in the dressage since we’ve been training on half passes and flying changes, but they both put in good tests, and they both came out of the event healthy and sound.”

After riding nine horses over the weekend, Boyd said he definitely felt the effects on his leg today. “I definitely wouldn’t have trotted up sound today,” he said. “But I spent a couple of hours at physio this morning and will most likely cut down on the number of horses I ride at Plantation this weekend so that I am good to go for Luhmühlen.”

Shamwari and Otis will be departing for Germany this coming Friday with super groom Lindsey Taylor. Boyd will depart Saturday night to begin final preparations for the German four-star. Phillip Dutton is also taking Mighty Nice to Luhmühlen in hopes of landing a spot on the World Equestrian Games team.

After the weekend’s success, Boyd said he is ready to put in a good showing in Germany. “I’m quietly confident and nervous all at once,” he said. “I’m quite well mounted, and I believe these are two of the best horses in the world. They both competed in the London Olympics, and I feel that anything less than a sensational result will be a disappointment.”

Boyd is also happy to have several of the owners for both Otis and Shamwari coming to cheer him on in Germany. “Between Otis and Shammie, there are about 20 owners involved, so we’ll have a good contingent of American supporters there,” Boyd said. “The syndicates have worked out really well, and we really look forward to these trips because it’s one of the reasons the members are behind the horses; they want to see them go overseas and take on the best in the world. Some of the owners have shares in both horses, which gives them two reasons to cheer.”

As the selection process for the World Equestrian Games comes down to the wire, the next few weeks will be nail-biters as the contending pairs make their best case for selection onto the team. Team selections will be announced shortly after Luhmühlen, so keep it locked here for updates and breaking news as Normandy edges closer.