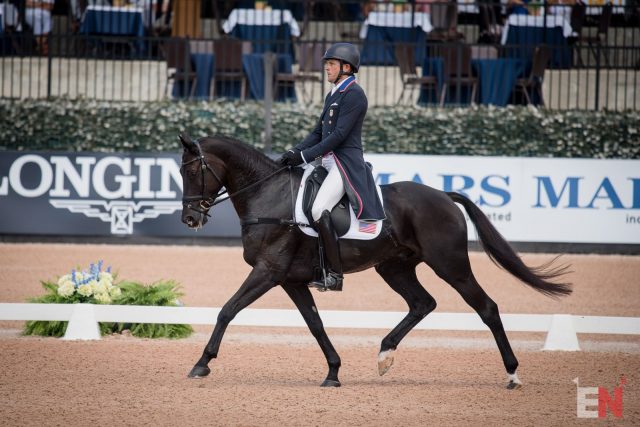 The U.S. Team for the 2019 Pan American Games are having their final outing this weekend in the Maryland International CCI3*-S in Adamstown, Maryland. They’ve started out with a bang as team horses swept the division after dressage. We’ve got your fast-and-dirty recap:

Boyd Martin and Tsetserleg, Christine Turner’s 12-year-old Trakehner gelding, are leading the three-star class, which is their first competition back since earning the USEF National Championship at Kentucky this spring. Their score of 22.5 is “Thomas'” best dressage result to date.

“I was really pleased with ‘Thomas,’” Boyd told The Chronicle of The Horse. “We don’t do this test very much since he’s a higher-level horse. It’s a bit unusual to go into a test without flying changes or a canter half pass, but he’s so good in the ring. Basically, an old lady could ride him around a dressage show. He’s very quiet and obedient, and I think we’ve got him in a good place. He’s such a little show pony. He knows all the tricks. He doesn’t get hot or fancy. He can really get through a test safely without mistakes. I still think I can improve his dressage in the next month leading up to Peru. It’s just working on these fine details and polishing it.”

Tamie Smith piloted Mai Baum to a 23.8 for second place. The a 13-year-old German Sport Horse gelding owned by Alex Ahearn, Ellen Ahearn, and Eric Markell was originally listed as Tamie’s reserve horse, but got called up earlier this week to replace stablemate Fleeceworks Royal, who has suffered a minor injury.

Doug is also 10th with his reserve horse Vandiver, a 15-year-old Trakehner gelding owned by Debi Crowley, Jessica Payne, and Doug Payne, on a score of 29.4.

Colleen Rutledge and her own Covert Rights, a 13-year-old Thoroughbred/Clydesdale, are fourth on a score of 26.3

Phillip Dutton and Z are fifth on 27 before they head next to represent the U.S. at the CCIO4*-S team competition at Aachen.

The CCI3*-S division will have their show jumping and cross country phases tomorrow.

Our traveling reserves, Liz Halliday-Sharp and Cooley Quicksilver are also running their final prep this weekend at Barbury International in the UK.

The Pan American Games will be held Aug. 1-4 in Lima, Peru. The U.S., Canada and Brazil are all seeking qualification for the 2020 Tokyo Olympic Games at the Pan Ams, and two team slots will be allocated to the nations that win team gold and silver. Following this final outing all team members including our traveling reserves will head to Stable View Farm in Aiken, South Carolina for the final training sessions. 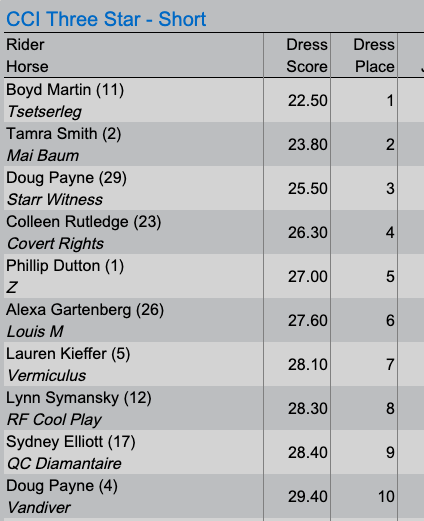