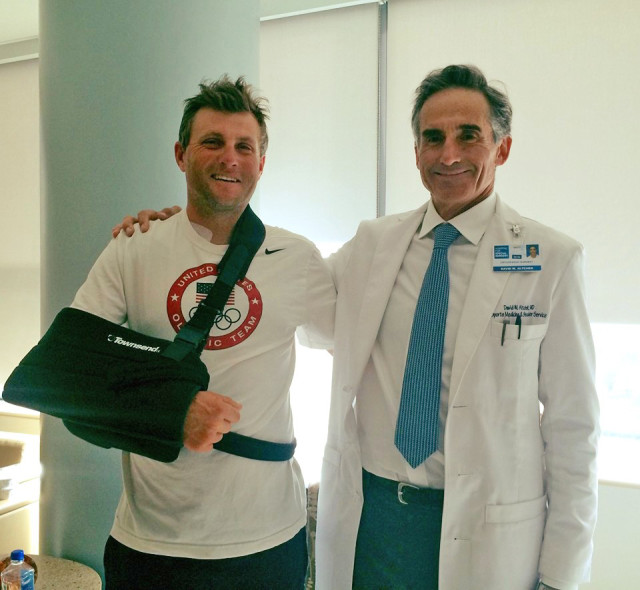 Boyd Martin is recovering after undergoing successful collarbone surgery yesterday at the Hospital for Special Surgery in New York City, and he explains the procedure in detail in an update on his blog. He broke his right clavicle on Wednesday after taking a spill from Argon 18 while running the novice cross country at Full Gallop.

The U.S. Olympic Committee and Dr. Mark Hart, a surgeon himself and chair of the Event Owner’s Task Force, arranged for Boyd to be transported to New York for the operation, which was performed by Dr. David Altcheck.

Dr. Altchek, who has also performed surgeries for tennis star Serena Williams and the New York Giants’ quarterback Eli Manning, attached Teflon on the lower side of Boyd’s collarbone. He then drilled into the bone, injected stem cells to help re-grow the bone and attached a stainless steel plate to the top.

Boyd said the collarbone is feeling much better already: “Even though I’ve got to take it easy, I nearly have full range of motion in my right shoulder already, mere hours post surgery, which is pretty impressive.”

Boyd flew back to Aiken this afternoon and is now resting comfortably. While he’ll be closely following doctor’s orders, the prognosis for getting back in the saddle is extremely good, and he’ll be back to riding as soon as he feels strong enough.

Two of his top Olympic prospects, the Shamwari Syndicate’s Shamwari 4 and Steve Blauner’s Master Frisky, were scheduled to make their return to competition at Pine Top this weekend after lengthy hiatuses, and Phillip Dutton has graciously stepped in to compete them instead.

Massive kudos to the USOC and Dr. Mark Hart for stepping in to expedite Boyd’s surgery at such a top notch facility, and we’re looking forward to seeing him back in the tack soon.