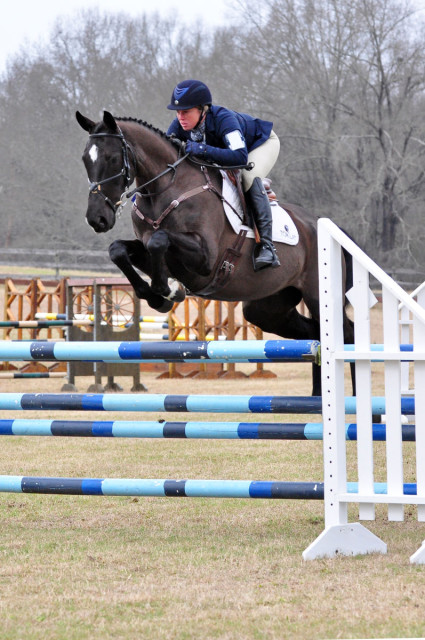 Colleen Rutledge and Roulette at Pine Top. Photo by LT/Hoofclix.com

Colleen Rutledge, Kim Severson and Peter Barry emerged as the big winners today across the three Intermediate divisions at Pine Top Horse Trials in Thomson, Georgia, which packed in more than 50 horses between them.

Colleen delivered the fastest cross country time of the day and the best final finishing score aboard Leslie Schulz’s Roulette. They scored 24.8 in dressage to sit second in the division after the first phase and jumped clear and inside the time in show jumping to move into the lead.

Then Colleen and “Rou,” an 8-year-old Oldenburg gelding bred in the U.S. by Cynthia McNemar, turned and burned around Derek di Grazia’s cross country course, coming home clear with 8 time penalties to win the Open Intermediate C division on a final score of 32.8 — the only finishing score in the 30s across all three divisions.

“I was pleased with pieces of our dressage test. For our first outing of the year, I’m really quite happy with him. The show jumping was a gorgeous course that I didn’t ride very well, and I love being able to come out of the ring saying that I’m glad my horse is such a great jumper,” Colleen said.

“The cross country was a really good, open galloping course that asked some really great questions. It was not small by any stretch of the imagination. For a first-of-the-year opener course, it was perfect — nothing trappy or tricky. Time is tight to make here. I wasn’t wasting any time at the fences, and he was turning great.” 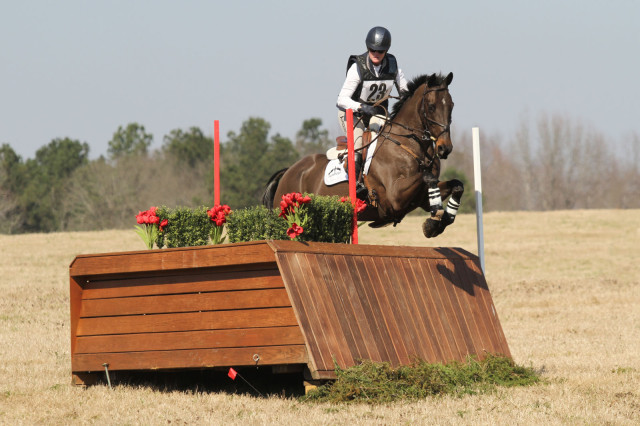 As for what’s next for Rou, Colleen said he will stay at the Intermediate and CIC2* level for the spring, with a tentative plan of aiming for the CCI2* at the Jersey Fresh International Three-Day Event in May and a possible move up in the late summer to the Advanced level.

“He only just turned 8. Maturity wise and since he’s a warmblood, I want to make sure that he’s as confident as he can be,” Colleen said. “The two-star for him last fall (at Fair Hill) definitely pushed the envelope for him, and I want to make sure he’s totally confident before we step up a level.”

Kim Severson and Fernhill Fearless had a super start to the season with a win in the Intermediate B division. “Sparky” continues to make his comeback following a coffin bone injury at the 2014 World Equestrian Games. Kim had the 16-year-old Irish Sport Horse gelding out for a few horse trials last season and never intended to do anything beyond that, she said.

“That was always the plan,” Kim said. “There was no time to get him ready for Burghley, and he didn’t need to do Fair Hill again, so I was never intending to do anything beyond horse trials with him.”

Instead Sparky will target the main three-star competitions this spring — Pine Top, Carolina International and The Fork — with an end goal of competing at the Rolex Kentucky Three-Day Event in April. Kim said she’s thrilled with how he’s feeling and was very pleased with today. 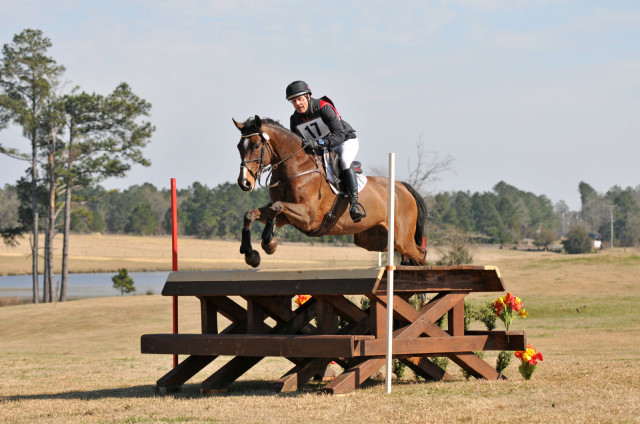 “I thought he did a good test in dressage; he did everything he was supposed to do,” Kim said. “In show jumping he was strong and kind of running through me, but the second half of the course was better. Then I put him in a pelham for cross country and he was great. It was one of the times I could let him go and ride him. He was pretty darn happy. It was one of those times when we were both smiling and happy coming off the course.”

Kim and Sparky scored 31.3 in dressage, had one rail down in the show jumping and picked up 8.4 time penalties during their clear cross country trip to win on a final score of 43.7. That cross country time ties Holly Payne Caravella and Never OutFoxed for the second fastest trip of the day at Pine Top.

Peter Barry and Long Island T took the win in the Intermediate A division on a score of 41.2 after adding 13.2 time penalties to their dressage score of 28.0. “Ludwig,” a 10-year-old Oldenburg/Thoroughbred gelding he owns, has a full season of Intermediate/two-star experience under his belt now and is another horse that will likely be eyeing a move up to Advanced level this year.

Skyler Decker and Inoui Van Bost won the Intermediate Rider division. They were fourth after dressage on a score of 38.0, jumped clear and inside the time on cross country and picked up 22.8 time penalties to finish first on a final score of 60.8.

It was a safe day at Pine Top, with no major injuries reported. Phillip Dutton and Sportsfield Candy were leading the Intermediate C division after dressage only to part ways at the final fence in show jumping. Phillip confirmed to EN that he is OK and on track to ride eight other horses during the weekend, including Shamwari 4 and Master Frisky for Boyd Martin, who is recovering from surgery after breaking his collarbone on Wednesday. 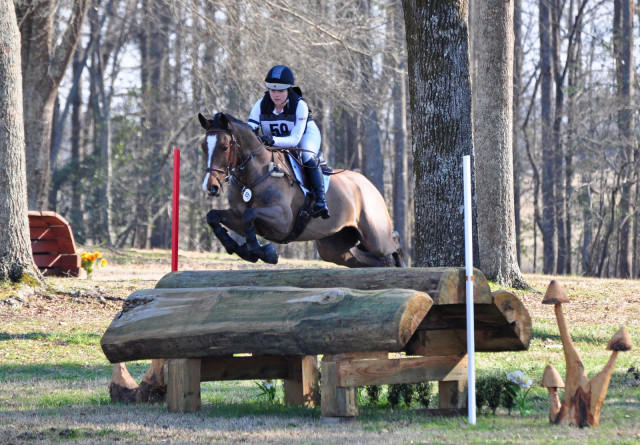 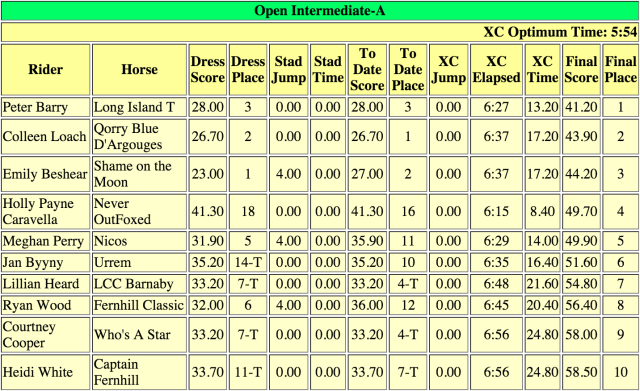 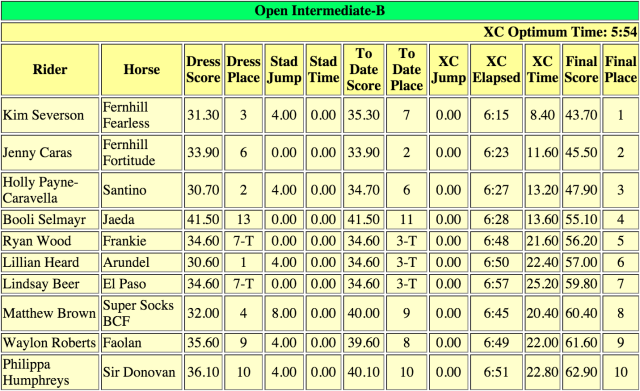 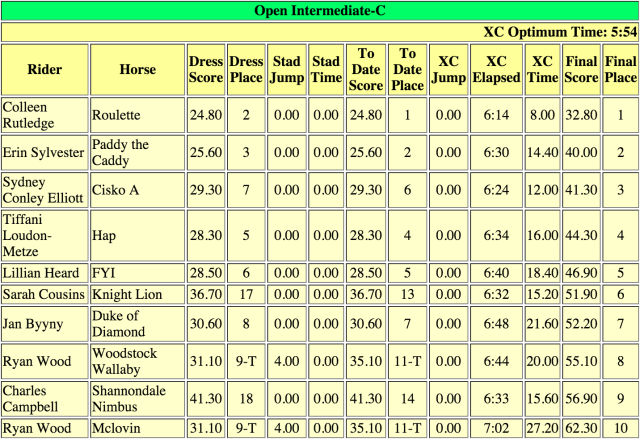