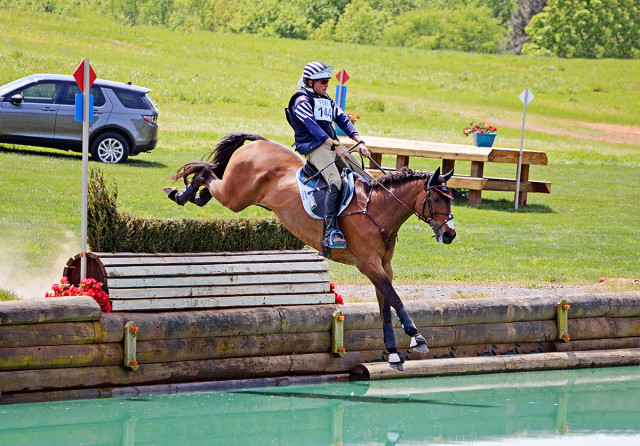 Boyd Martin and Master Frisky at The Fork. Photo by Jenni Autry.

Boyd Martin has withdrawn one of his Badminton entries, Master Frisky, after an unfortunately timed bout of cellulitis cropped up just before he was due to depart for England.

“Somehow he picked up an infection, which is fortunately responding well to antibiotics,” Boyd said on his blog. “Joanie Morris from the USEF delayed the flight by a day to see if we could get him on board, and my vet Kevin Keane said there’s a lot of improvement already, but we decided not to spend the money to fly him over there when he’s not 100 percent.”

Boyd wrote that “Mikey,” a 12-year-old Irish Sport Horse gelding owned by Steve Blauner, will likely reroute to the CCI3* at Jersey Fresh instead.

“I’m terribly disappointed for owner Steve Blauner as I really felt we had Mikey in tremendous form to put in a good run at Badminton,” Boyd said. “He’ll be good to go soon enough, though, and we will aim to impress at Jersey.”

Best wishes to Mikey in his recovery, and we’ll look forward to seeing him in action at Jersey Fresh next month.

Boyd will still ride Lucy Boynton Lie’s Crackerjack at Badminton in the 13-year-old Thoroughbred gelding’s overseas debut. The other North American entries for Badminton are Buck Davidson and The Apprentice, Libby Head and Sir Rockstar, and Kathryn Robinson and Let It Bee.