Well, the end of March draws near and our Bracket Challenge is down to the very best, as voted by you.  Our Final Four has been determined: CUSTOM MADE, WINSOME ADANTE, MURPHY HIMSELF, and CHARISMA.  A truly deserving group of horses, each of whom really showed us what eventing is all about.  From here out, we will present only one matchup each day, as I’m sure it will be tough to decide!

COMMENT OF THE DAY:
“Kim” had a wonderful story about Charisma from last Friday’s post.  It’s amazing how these horses impact our lives, despite the fact that we may never even meet them in person.

The first time I ever even saw eventing was in 1984. I was 17, had longed for years to someday learn to ride a horse (I was still a few years away from it). On a summer afternoon I flipped on the tv to whatever the coverage was from the LA Olympics, and saw the most wonderful thing–gorgeous acres of green, huge solid jumps, horses galloping over things I’d never dreamed existed. It was cross country, and I was mesmerized, hooked from that moment on. A few days later I sat with my boyfriend and parents to watch the closing ceremonies, and into the LA Colisseum came two big horses and one little. Then the riders dismounted–two little and one big. Mark Todd and Charisma had won their first Olympic medal.

I started riding a little over a year later, but it wasn’t until almost twenty years after that that I finally began to event. Charisma’s photo hangs in my guest bathroom (my husband–that boyfriend of 25 years ago–won’t let me hang it above our bed). I’ll vote for Charisma first, last, and always. What a horse!

TODAY’S MATCHUP:  Best of the US

Who will earn the right to represent the Stars and Stripes in the final showdown?  Both (2) CUSTOM MADE and (1) WINSOME ADANTE proved their competitive greatness on the biggest of stages.  Tailor has an Individual Olympic Gold; Dan has an Individual Silver, Team Bronze, and WEG Team Gold.  Tailor won Badminton; Dan won Rolex three times.  Both excelled in all three phases, in the long format.  I would give a slight edge to Winsome Adante; David O’Connor was a very big name aside from Custom Made, but Dan really pushed Kim Severson to the top of the world scene.  I don’t think you can go wrong selecting either horse! 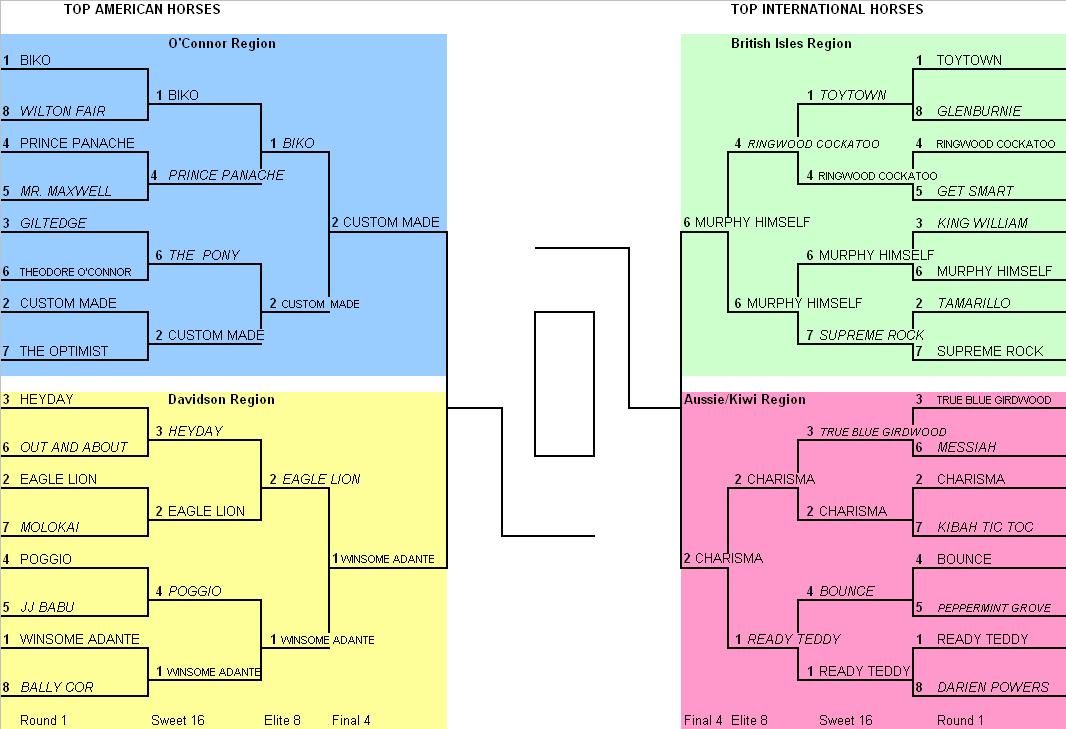