No big surprises yesterday, as Winsome Adante and Ready Teddy move on to the Elite Eight.  They proved they’re #1 seeds for a reason!

COMMENT OF THE DAY:
Anon in Australia continues to bring it, and we appreciate her contributions.

I loved Ready Teddy and saw him in the flesh once – the epitome of a sparking, intense international eventer. But I suspect Bounce taught Vaughn as much as the other way round…and ya have to love Vaughn. So Bounce gets my vote.

The toughest pairings of the whole tournament could happen today.  The deserving 2-seed CUSTOM MADE faces fan-favorite (6) THEODORE O’CONNOR, in what could be a voting war.  Also not to be taken lightly, (6) MURPHY HIMSELF and (7) SUPREME ROCK will duke it out in the British Region.  Don’t let your favorite horse get knocked out, make sure you vote and tell others to do so!

Tailor teamed up with David O’Connor to make one of the best pairs in US eventing history.  David and Tailor placed 5th individually in Atlanta, 3rd at the ’96 Badminton, won Badminton CCI4* in 1997, and then won the individual Olympic Gold at Sydney in 2000.  David has a habit when he rides of focusing so intensely on his horses that he can forget about his course, and, despite that infamous moment of hesitation that brought all of American eventing screaming to our feet, Tailor broke the Olympic score record in Sydney and ended a 25 year US eventing Olympic Gold medal drought.  Tailor is renown for being calm on the flat, and chilly in person, but turning into what David describes as a “Saturn V rocket” (think NASA) when the cross-country starts.  The 17.2 hh Tailor now lives in retirement at Stonehall Farm in Virginia with his stablemate Giltedge.

Inspiring pint-sized athletes everywhere, the “Super Pony” took the event world by storm during his tragically-brief career.  Eventually paired with Karen O’Connor, Teddy finished 9th at his first three-star in 2006 at Jersey Fresh.  The next year would see him dominate the US scene, winning the Fork CIC***, finishing 3rd at Rolex, and winning individual and team gold at the 2007 PanAms.  The Pony ended up 6th at Rolex in ’08, was short-listed for the Olympic team, when an unfortunate accident resulted in fatal injury.  His short glimpse of greatness proved to all that “pony power” was a force to be reckoned with.

6.  MURPHY HIMSELF
The athletic Murphy Himself began his eventing career with Ginny Leng, and the pair won Burghley in 1986.  Due to the gelding’s strength on XC, Ginny decided to trade horses with Ian Stark in 1988 (for the horse Griffin), and Ian Rode Murphy Himself for the remainder of the horse’s career.  With Ian, Murphy Himself delivered countless extraordinary XC rounds, completed Badminton multiple times including second in 1991, placed second at the Stockholm WEGs in 1990, and competed for the British Team in 1992 at the Barcelona Olympics.  Click here for a video including Murphy Himself.

Supreme Rock, ridden by Pippa Funnel, won back-to-back European Champtionships in 1999 and 2001, as well as team silver at Sydney.  Supreme Rock is one of only a couple horses in history to win Badminton twice (2002, 2003).  Supreme Rock was also part of Pippa’s team that won the 2003 Rolex Grand Slam of Eventing, which, depending on how you divide up the winnings, makes Supreme Rock the largest money winner in the history of eventing. 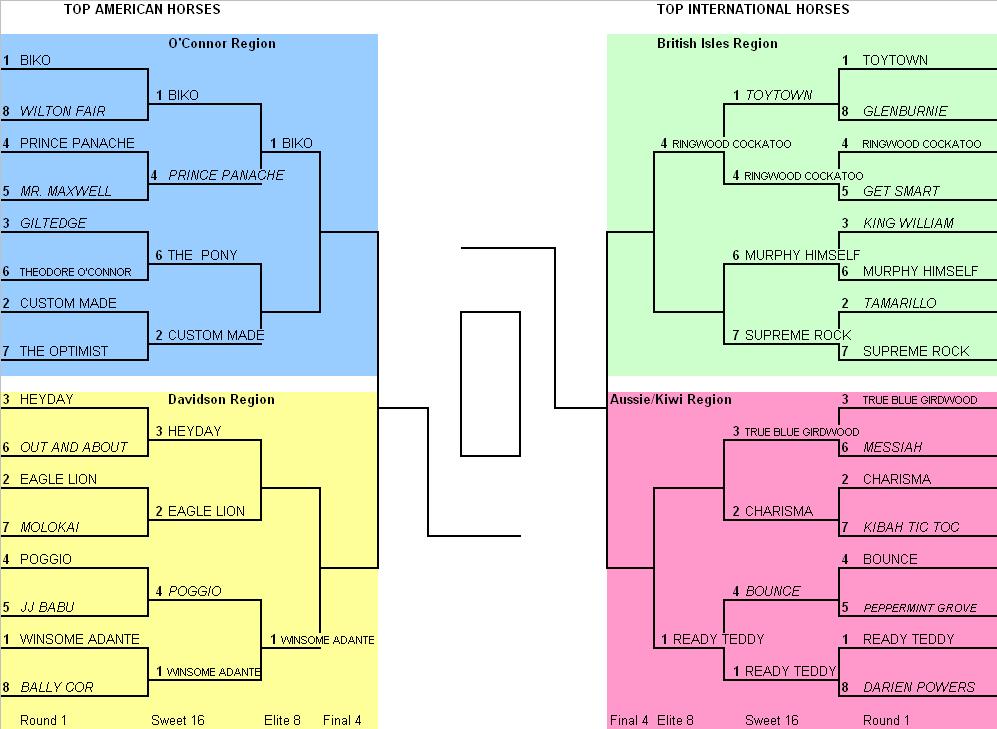