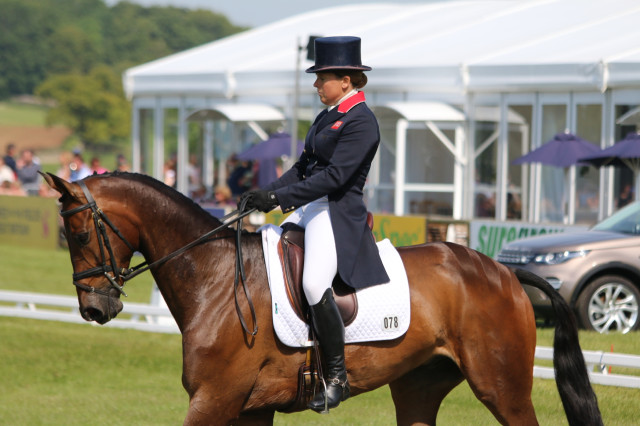 At the end of the dressage phase at Bramham Pippa Funnell finds herself leading the CIC division on Billy The Biz and in equal third position in the CCI on Sandman. (All scores here). Both horses are still green at this level but Pippa hopes that if she can get the mileage into them she thinks they may well end up being two of the best horses she’s ever had in all three phases.

Billy The Biz, a ten year old homebred grey gelding by Cevin Z has only been eventing for a year and a half as he show-jumped with Pippa, and half owner Carol Toliver until he was a seven year old.

Sandman, a stunning 9 year old bay gelding by Sandro Boy Junior was bought from Germany as a six year old off a video after a former working pupil gave Pippa a heads up about him, and once Pippa and her mother realised how nice he was they decided to give Pippa’s long time mentor Ruth McMullen a share in him for her 80th birthday.

“She’s here watching this weekend which is lovely because it sort of feels like it’s come full circle. All those years I had horses of hers and she was super because she never sold them and gave me a chance to ride them, and I thought it would be nice for her to have an interest and it’s great.” 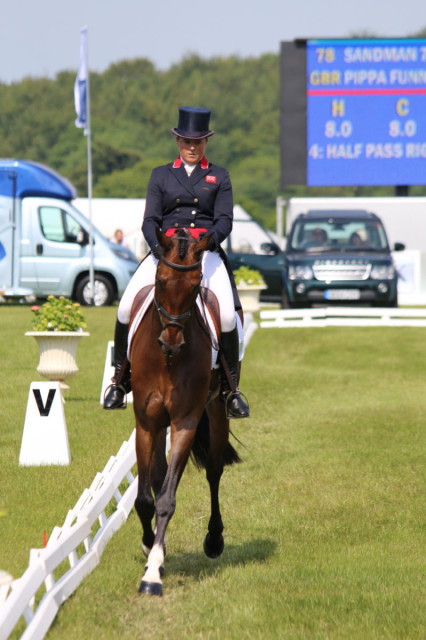 Pippa Funnell and Sandman. After buying him sight unseen as a 6 year old on the advice of a former working pupil and having watched a youtube video of him xc schooling, Pippa admits that her one moment of doubt about Sandman was when he initially stepped off the lorry, “because he is SO narrow.” Photo by Samantha Clark.

Although he recently won at Chatsworth which has put him on the radar, Pippa maintains that Bramham’s cross country will be a big ask for Sandman and as such she has no real expectations, “I’m not putting pressure on them or myself, I’m just going to go out and enjoy it; I’m going to ride them according to how they feel not necessarily according to the clock.”

One thing all the riders agree on is that the cross country track is one to be respected; you bring a horse to Bramham if you want to find out what you’ve got. CCI3* leader Flora Harris is looking forward to attacking it on Bayano after a mistake at Tattersalls a couple of weeks ago.

“I think there’s plenty to do, it definitely won’t be a dressage competition. I think it’s absolutely beautiful, I think Ian’s done a fantastic job, the ground is great, the course looks great but there’s plenty to do all the way home. He was a little bit cheeky at a corner at Tattersalls and I think in hindsight our preparation could have been slightly different the day before cross country.

“We gave him a very, very light work out and I felt like the horse was super-confident and almost a little bit fresh so we decided to re-route and today we’ve worked a little bit harder in preparation for tomorrow, and I’m feeling really confident, the horse feels amazing. We’ve done work on that type of fence obviously since then and he feels very, very good and I’m certainly feeling like we’re going to go out and give it a good go tomorrow.

With the scores tightly packed — there are just 20 penalties i.e. a stop cross country separating the top 50, and eleven penalties would about cover the top 30 — Flora has a 1.3 margin lead, and she says Bayano, a 9 year old bay gelding, can still improve more.

“It’s taken us a long time to get to this point and it’s really in the last six weeks that it feels like we’ve finally nailed it, and at this point I still feel like there are still more marks in him. My halts were my weak point today but he’s been very, very tricky up until this point so I’m thrilled that he’s buckling down. I think he has more strength to come, and I think the canter work will be better when he’s stronger but no, he was fab, very very good, I’m really pleased with him.” 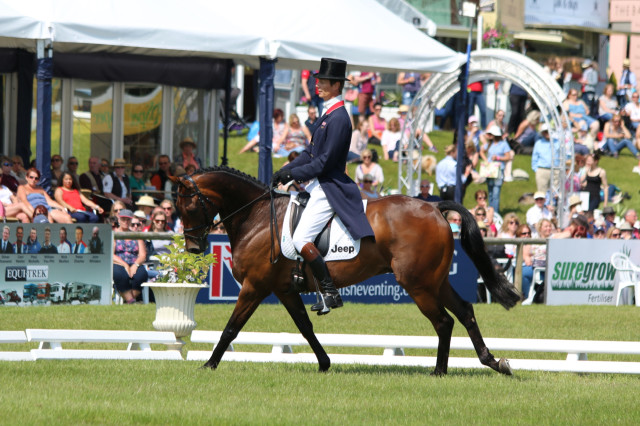 Fernhill Pimms was by no means the flashiest mover we saw today, in fact I think all three judges gave him a 7 for his paces, but his rider William Fox-Pitt didn’t give any points away. Forward and correct, smooth, flowing, accurate and secure, there was nothing to fault and thus they lie 2nd after the dressage phase — he is that good, people! 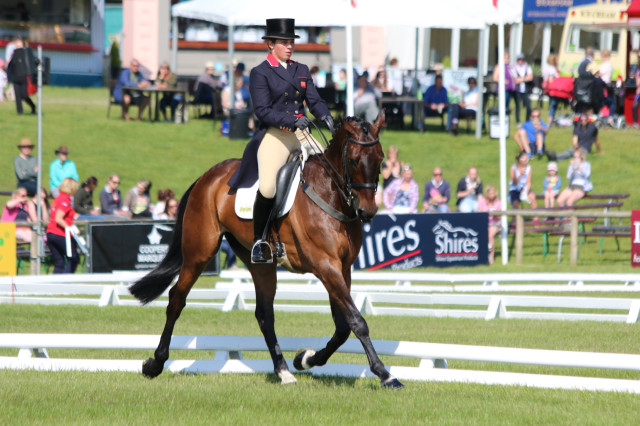 Kitty King is tied for third place on Persimmon with Pippa on Sandman, “I was really chuffed with how he went, he was really rideable and he did the best changes he’s done in a test. He can get a little bit long in his outline and try to go down but he stayed up quite well and tried to listen and stayed pretty supple throughout the test.”

Kitty shared that Persimmon can still be a little temperamental at times although he’s much improved since he was a young horse, and although she’s relieved he doesn’t lose his temper like he used to, his quirkiness can have it’s advantages on the cross-country,

“If he’s making out that he’s tired I know that one touch with the whip he’s so mentally tough and he hates to be told off so much. you can’t even touch him on the shoulder, that you’ll never get to the bottom of him, he’s such a tough nut so that’s quite good to know! It’s just about keeping him on side and listening, and not letting him get too keen cross country, sometimes his legs go a bit quicker than his brain! He’s feeling on good form though so I’m hoping he’ll give me a nice ride tomorrow.

“It was always my plan to bring him here to Bramham because it’s a tough track and the terrain is quite testing for them, and with the European Championships being at Blair which is again a track with very tough terrain, I was hoping that if we went well enough here we would stand a decent chance to get selected for Blair and then this run would be a good preparation for the hills there, and it would teach me a bit more about him and his fitness and how he deals with the hills if we’re lucky enough to go there.” 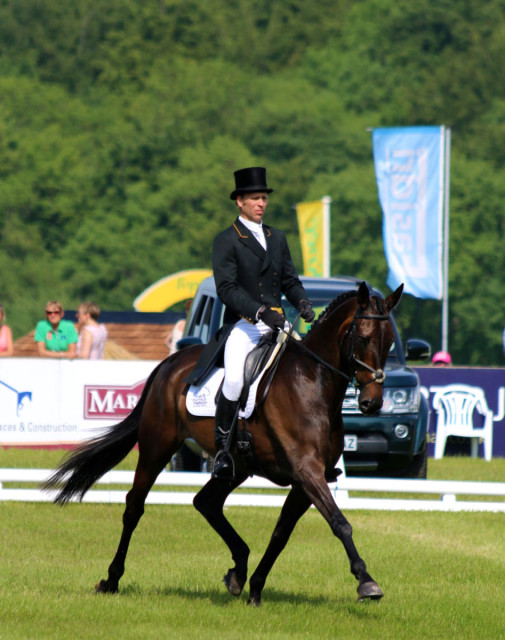 Crown Talisman looks like he’s loving the European lifestyle and Nick looks very at home on him too; I’m excited to see this partnership progress — he’s such a super horse and I still think we’ve only seen glimpses of how good he might be yet. The fact that he’s in the top ten after the dressage at a serious event again is a testament not only to his and Nick’s budding relationship, but also to Doug Payne’s solid foundation of groundwork and Tali’s lovely temperament.

I’m sure Doug is very proud and cheering him on in the US, and also he should be proud that he found the horse and several more like him that he’s bringing up just as well. It’s not easy to part with such a prospect but hopefully this makes it a little sweeter — that and the groundbreaking on the new farm! 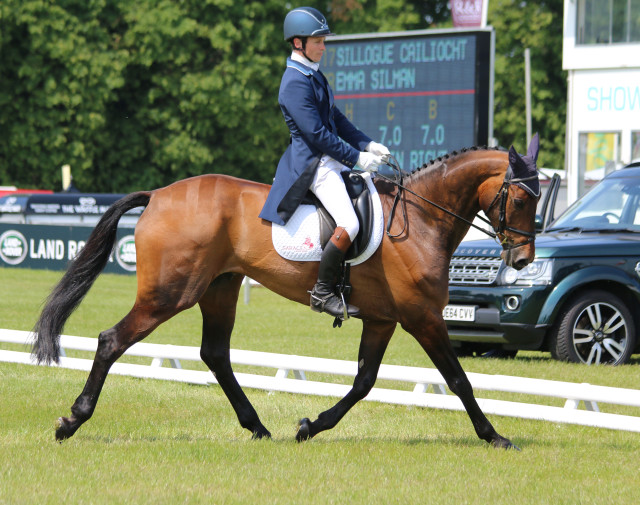 We’ve been thoroughly spoilt by three days of gorgeous sunshine up here in Yorkshire but it wouldn’t be British not to discuss the weather endlessly so now that we’ve all compared sunburn, complained about the heat, laughed at our lack of summer fashion sense there’s rain in the forecast and we can start all over agin.

Depending on how many times you check and which website, it may or may not rain all day Saturday and Sunday, most of the day, all night, light rain, heavy rain, intermittently or constantly. One thing we can be certain of is we’ll be getting some weather these next two days, and we’ll be talking about it. In all seriousness we are supposed to get some rain, I don’t know how much. 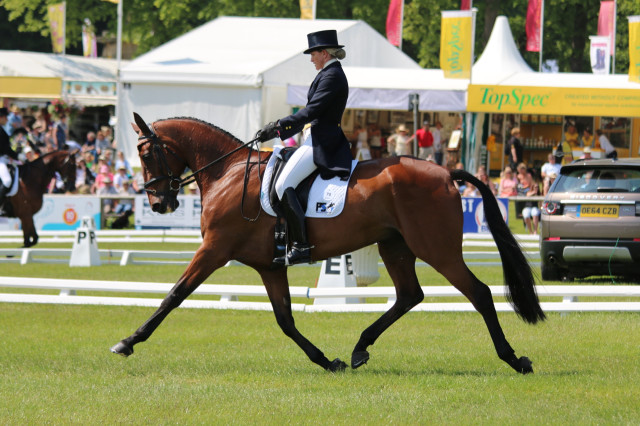 Sarah Cohen and — a combination that should eat up the cross country at Bramham. Photo by Samantha Clark.

We’ve also been thoroughly spoilt by the organisation here and the general helpfulness and friendliness of all the volunteers — many thanks to them all, especially the formula one style buggy drivers ferrying us up and down from the stables to the arenas – Liz Halliday, I don’t know why you bothered going all the way over to LeMans for race cars, you  should have come here!

I’ll be tweeting as much as possible and have a full report as soon as I can, wifi permitting. Wishing all the riders tomorrow the very best of luck, and safe and speedy rides. Go Bramham and Go Eventing!