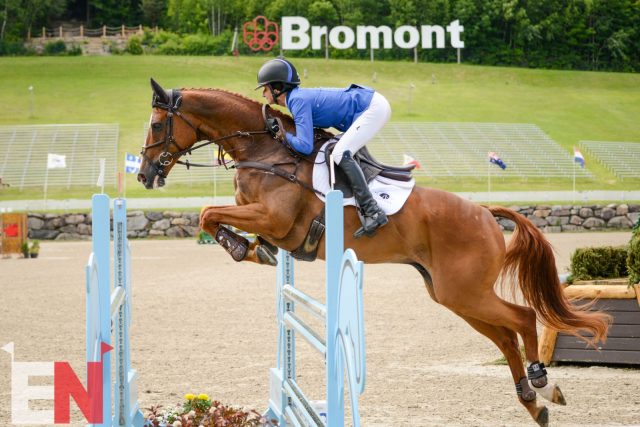 “I’m just proud of yesterday and I’m proud of how hard the horse always tries. As I get older, I realize it’s not always about being perfect. It’s about enjoying it when it goes your way.”

Wise words were spoken today by Jennie Brannigan, who clinched the CCI4*-L victory at this year’s MARS Bromont CCI Three Day Event aboard Tim and Nina Gardner’s Twilightslastgleam (National Anthem — Royal Child, by Northern Baby). Despite lowering two rails, they leave Canada with a first FEI win for the 12-year-old Thoroughbred gelding on a final score of 42.2.

“I knew that he would be pretty tired, but he was trying his heart out. Obviously you want to jump a clear round but that horse deserves to have a win and I’m really proud of him,” she said. “And the Gardners — they deserve this.” 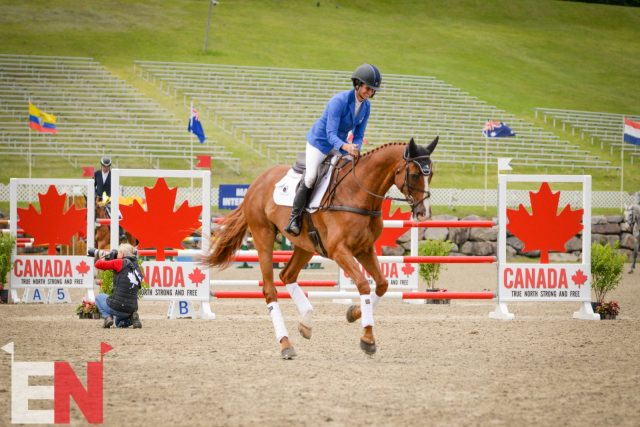 The road back to the upper levels after diagnosis of chronic Lyme disease and other setbacks was not a smooth one for “Comic”, as we detailed in yesterday’s cross country report, but Jennie and the Gardners’ careful care and belief in the horse are reaping the rewards and the future looks, dare we say, gleamingly bright for this pair.

After Liz Halliday-Sharp withdrew Cooley Moonshine ahead of this morning’s horse inspection, Canada’s Jessica Phoenix and Wabbit had slotted into second place ahead of today’s action. However, a costly round moved them down the leaderboard and left the door open for compatriot Lindsay Traisnel and Bacyrouge to overtake them. Lindsay and “Dreamy” jumped a clear round just two seconds over time and finish with a score of 43.6, ultimately jumping from ninth after dressage to finishing their weekend in second place. 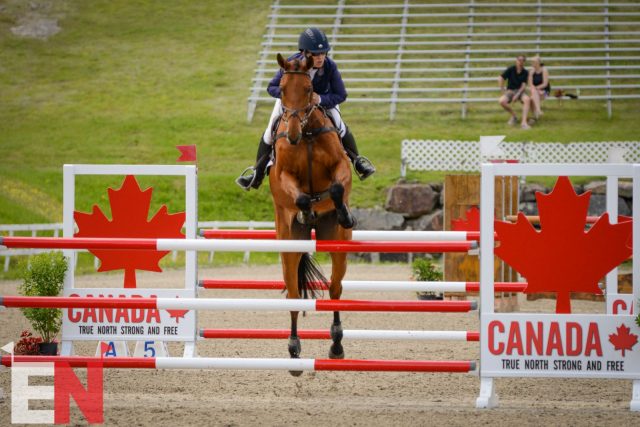 A native and current resident of Windsor-Essex County in Ontario, Canada, Lindsay originally purchased Bacyrouge as a resale project while she was living and training France. She and her husband (a fellow rider and trainer, to whom she also credits her and Dreamy’s success) ultimately sold everything else they had in order to keep the Selle Francis gelding (Mylord Carthago*HN – Leila, by Clyde de la Combe) and he is now owned by Lindsay’s parents, who have also played a large role in helping the couple develop their business in Canada and balance their family life with two daughters.

Windsor-Essex County, by the way, its just under the “thumb” of Michigan, if you need a geography lesson — they are actually closer to the Kentucky Horse Park than they are to Bromont! Even though other spring long format options may have been tempting, Lindsay insisted up bringing in Dreamy to Bromont for his spring season finale and they had no problem tacking yesterday’s cross country test.

“He’s got a lot of blood, he loves to gallop, he’s really scopey. As long as I’m on it, he does it,” Lindsay said. “So it’s good for him when the cross country is really tough and a real endurance test. He didn’t feel the mud … it didn’t tired him out. I got to the finish thinking I should have gone faster.”

While Lindsay was originally aiming for potential team selection for next year’s Pan America Games, she’s now eyeballing a trip to Italy this fall as a possibility if the stars align. 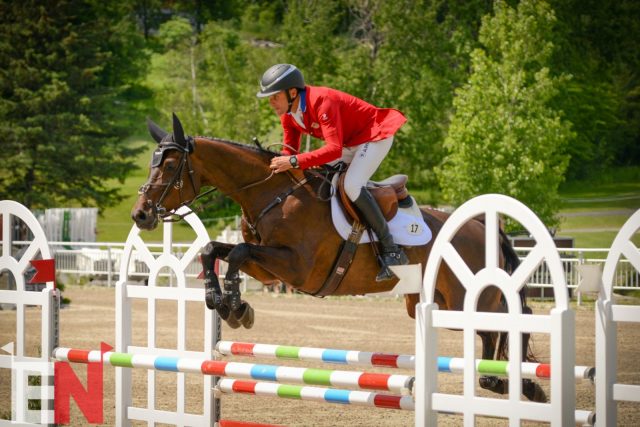 Third place belongs to the pair that delivered the only double clear show jumping round in the division: Boyd Martin and 13-year-old Contessa. The pair originally sat in fifth after dressage, gathered some time across country yesterday, and finishes their weekend on a score of 43.9.

The Holsteiner mare (Contender — Veritas, by Esteban) was bred in Germany and imported for Boyd thanks four long-time supporters — Fernanda Kellog, Gloria Callen, Kelly Morgan, and Densey Juvonen — and was one of the first horses that Boyd was able to pick out for himself after establishing himself in the U.S.

“She’s everything you dream of,” said Boyd. “She looks like a Thoroughbred, but she’s got sixty-percent blood and she’s a hell of a galloper, careful jumper, and she’s got a big canter, which makes the dressage flying changes tough at the moment, but you know, after yesterday I think she’s for sure a five-star horse.” 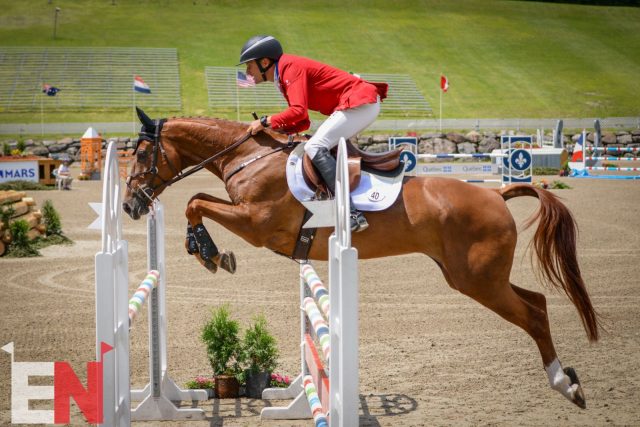 Boyd Martin and Miss LuLu Herself. Photo by Abby Powell.

It was another young up-and-comer in Boyd Martin‘s stable who ended up taking the crown in the CCI3*-L division.

At the beginning of the competition, nine-year-old Hanoverian Miss LuLu Herself (Stozenfels — Noisette, by Nobre XX) had sat just 0.2 marks off of Liz Halliday-Sharp’s lead. The mare added a bit of time on cross country, dropping the pair to third place after two phases, but emerges at the top of the leaderboard this afternoon thanks to a double clear show jumping round which sees her finish on a score of 31.9.

Bred by Sandra Konig, Boyd also found this mare in Germany and had the help from another great supporter, Bonnie Stedt, in bringing her stateside as a four-year-old.

“She was the only one crazy enough to buy her sight unseen,” Boyd recollected. “She’s a rocket, mate. She’s a hot, spicy little number and fantastic, real careful jumper and it’s been a good journey to get her to this stage. It’s very, very impressive how she went [across country] yesterday.”

Boyd says he plans for the mare to spend the rest of the year becoming more established at the three-star level before continuing her upward trajectory since she’s a bit of a careful, spooky horse and as such as taken his time producing her. 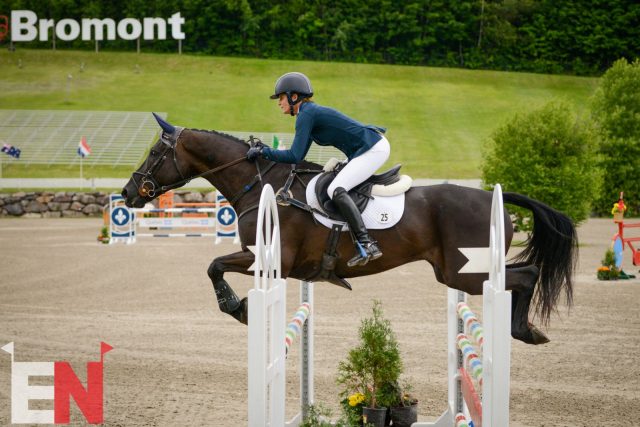 Just four horses remained to show jump in the CCI4*-S division today. All took at least one rail, but Valerie Pride and her own Favian (French Kiss – Risiko, by Relevant) retained their lead and earned the win, adding just a touch of time in addition to the rail. They finish the weekend with a score of 56.1.

“I’m so thrilled for him,” Valerie said. “He just shows up for work every day and the fact that he could be one of the last men standing at this challenging four star, I’m really proud of him.”

We’re wishing Valerie and Favian (and hopefully Theodore, too) well as they look towards putting best hooves forward in England this fall, where they’ll be basing in William Fox-Pitt’s yard in preparation for Blenheim in September . 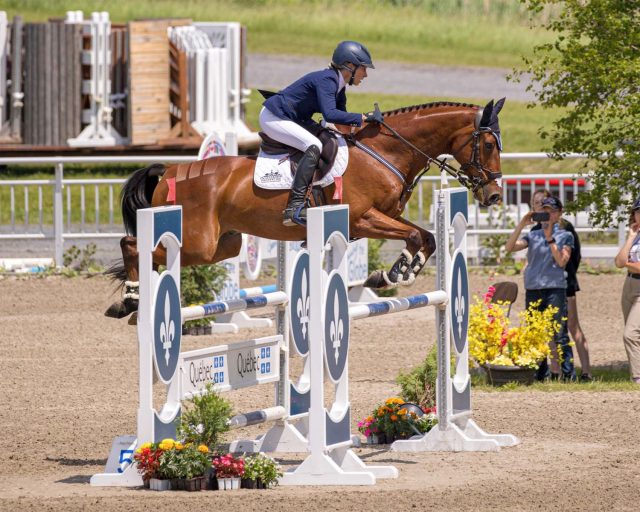 Liz Halliday-Sharp intended for this weekend at Bromont to be more of a “get to know you” experience for Miks Master C (Mighty Magic – Qui Luma CBF, by Flyinge Quite Easy 958), who only just joined her string with owners Ocala Horse Properties and Debby Palmer. A win in the 2*-L is icing on the cake.

“He’s an experienced horse, so this was more just an education round for all of us,” Liz explained. “This was his first run of the year as well. But he was super, I had a great time.”

Miks Master C has prior experience through the 4* level with former pilot Maya Black, so Liz plans to up the ante a bit as the year progresses, naming Boekelo as a potential fall goal for the 10-year-old gelding.

Beyond that, the remainder of the top four in the 2*-L remained unaltered after the final phase of competition: Phillip Dutton finishes second with Denim (owned by Ann Lapides, Caroline Moran, and Neil Sites), Allison Springer in third with No May Moon (owned by Nancy Winter), Jennie Brannigan fourth with Kismet (owned by Nina Gardner) — a half-sibling, sharing a sire, with Twilightslastgleam.

Liz now jets straight from Canada to Germany to meet up with Cooley Quicksilver and contest the Luhmühlen CCI5* and we’re wishing them all the best. 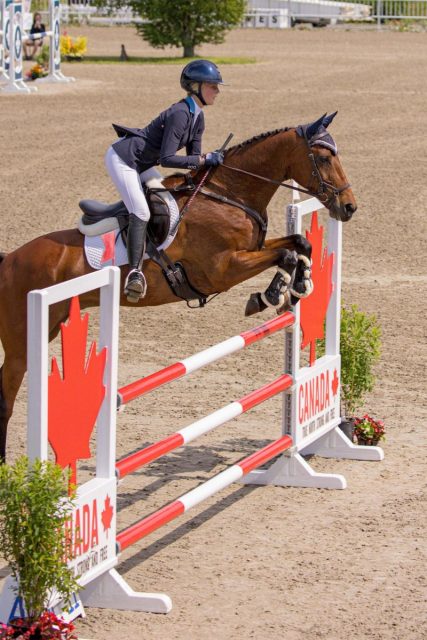 Cassie Sanger stalked the leaderboard of the young riders’ CCI2*-L all weekend with one of two rides in the division: Fernhill Zoro. Their double clear round today clinched them the win with a score of 30.6 after two phase leaders Ayden Schain and Fernhill Hole Shot tipped two poles to leave them on a 35.5 at the end of the weekend.

Fresh out of her junior year, this is 17-year-old Cassie’s first trip to Bromont and she’s here with her trainer, Darrah Alexander, with whom she’s been riding since she was 12, of Pine Plains, New York.

“It’s gorgeous, and for show jumping and dressage, it was definitely a lot of atmosphere,” Cassie reflected. “On cross country, the course was definitely tough and up to the level so I was definitely paying attention the whole way around.”

Fernhill Zoro is a 14-year-old Anglo-Arab gelding (Verdi — Oronia 2, by Voltaire) who was ridden through the Advanced by Cassie’s barn mate Alice Roosevelt. Once Alice decided to pursue law school, she handed the reins to Cassie.

“He’s very special and it worked out really, really well.”

We’ve enjoyed a weekend in Quebec and thank you for following along with our coverage! Time to hit the road home — Go Eventing!