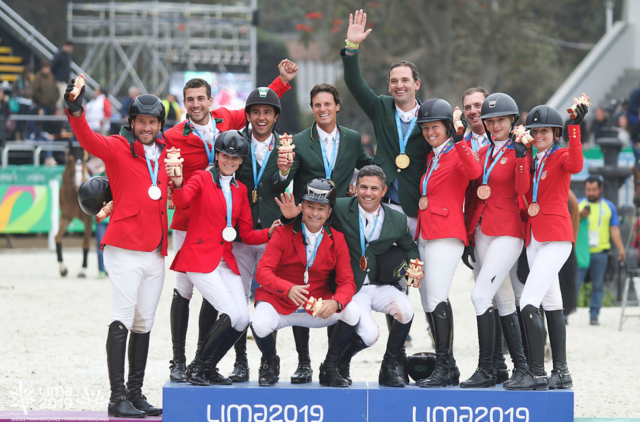 After taking team silver in eventing and bronze in dressage, Brazil capped an impressive two weeks at the 2019 Pan American Games with a gold medal — and a third ticket to Tokyo — for its jumping squad. Mexico and Canada also clinched Olympic qualification slots, finishing in 2nd and 4th place respectively, and the U.S. squad won bronze.

“We came here to qualify for Tokyo; that was the main goal and, of course, to chase this gold medal,” Menezes said. “It was a long journey to get here. It was an amazing journey together with these guys. This medal just gives the perfect end to it.” 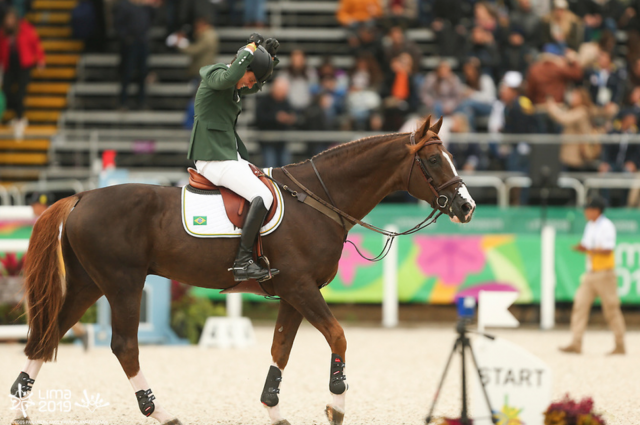 It was a tight battle for silver, with Mexico ultimately claiming runner-up honors and the second of three available Olympic qualification slots on a 22.97-point score. The Americans, already qualified for Tokyo due to their gold medal at the 2018 WEG in Tryon last September, finished with the bronze medal on a team total of 23.09 points, while fourth-placed Canada secured the final Olympic qualification on a 30.21-point team total. 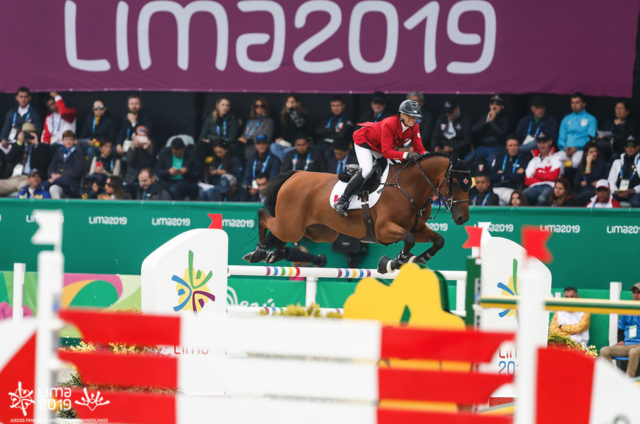 “We came here for a medal, that’s what you always do in a championship, and we went away with a medal,” said Ridland. “We were a little bit disappointed because we were in the fight for the gold until the end, and then the silver slipped away. What I’m most proud of is that all four of the riders were an essential part yesterday, putting us where we were, and today as well. Everybody participated in a group effort, and I’m very proud of that.” 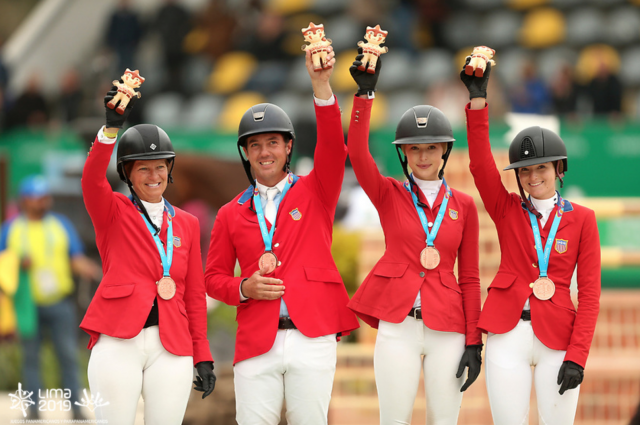 For three out of the four U.S. riders, this was their first championship competition. As part of the long-term plans for the U.S. Jumping Team to give more experience to up-and-coming riders in team competition, these Games showed the strength of the pipeline of riders ready to join championship teams.

“We were in a favorable position coming in, having already qualified for the Olympic Games, but we sent a team that we knew would be competitive for the gold medal, which it was,” said Ridland. “It was important to have them be able to ride side-by-side with Beezie and all her experience and have [alternate] Richard Spooner as part of the team and be absolutely instrumental all week long. To be able to have three riders that have never been in a championship before come away with a medal, that’s what it’s all about.”

The scores from Wednesday’s two rounds of team competition were added to Tuesday’s opening round scores (with a drop score from each) to determine the team medals. 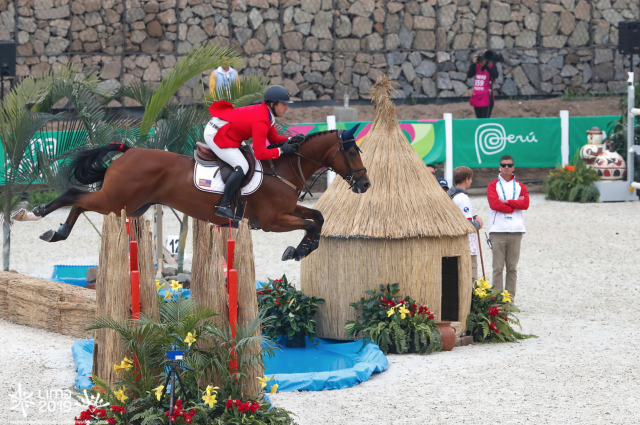 The pathfinders for the U.S. in the team rounds were Alex Granato (Wellington, Fla.) and Carlchen W, an 11-year-old Mecklenburg gelding owned by Page Tredennick. They had four fences down for 16 faults in round one.

Granato believes he “overthought” his first round. “He is such a fresh, oversensitive horse, and I went in and put a little more pressure on him in some places that I didn’t want to,” he explained. “Going where I did in the team order, it was not my ideal plan to put pressure on my teammates.”

Riding out of the second spot in the team order, Lucy Deslauriers (New York, N.Y.) and Hester, a 14-year-old Belgian Warmblood gelding owned by Lisa Deslauriers, had an eight-fault performance. 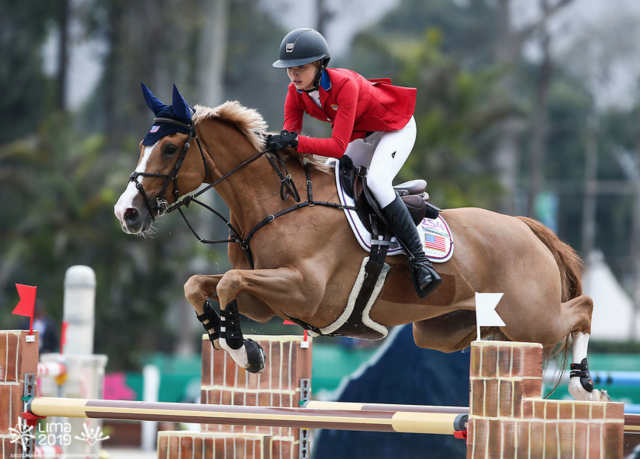 Eve Jobs (Los Altos Hills, Calif.) and her own Venue d’Fees des Hazalles, a 14-year-old Belgian Warmblood mare, put in a critical clear round for the U.S. in round one.

“I really owe that round to her because I was really nervous, and she helped me a great deal,” said Jobs of her horse. “She always fights for me, and that’s one of the things that I love so much about her. She wants to win just as much as I do.” 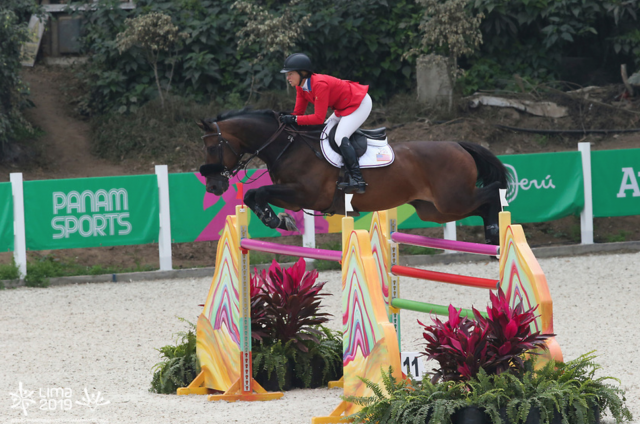 Granato and Carlchen W had a determined comeback in round two, finishing with just one fence down and a single time fault for a total of five faults. After adding to their previous total, they finished with 21.92 penalties.

“He felt a lot more level-headed this round,” said Granato after his second ride. “I would have liked to have started with that this morning, but it gave me something to dig in and fight for to have a better round. That is the end of our game [this week], so I feel like we’re going out on a really confident and strong note.” 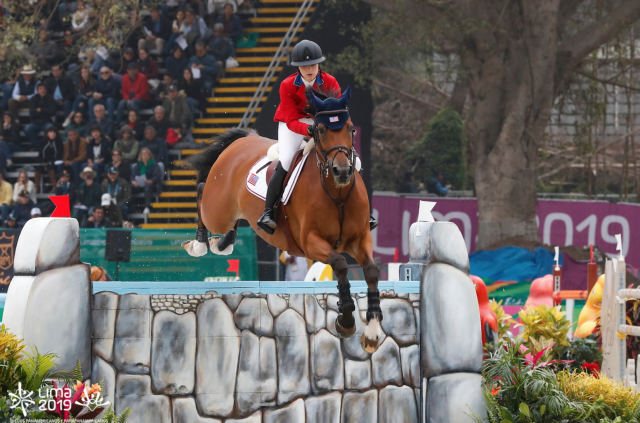 Deslauriers and Hester also had a significant improvement in round two, recording a clear round for the U.S. team. They finished with 9.32 penalties.

“There were three or four places where I wasn’t 100 percent satisfied with my ride, so I was just really focusing on fixing those things,” noted the 20-year-old Deslauriers. “These weeks [at a championship] really are ultimately about performing for your team, so I was just really happy that I could pick up from my two down in the first round and help them out a little bit. 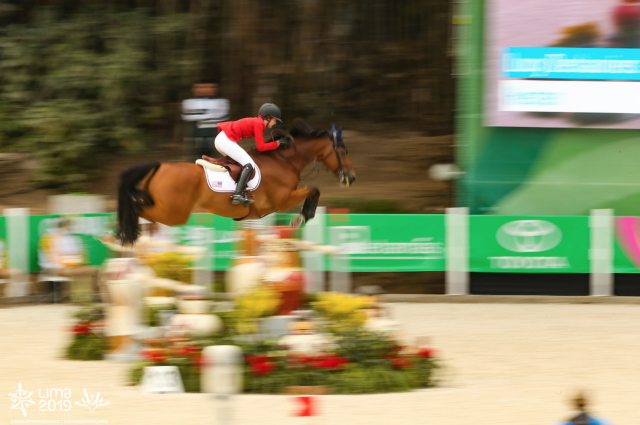 “Representing the United States at any level feels special and important,” Deslauriers continued. “When it goes well, it’s even better. To do it at a championship alongside one of my best friends and two other riders I’ve looked up to, there are no words.”

Returning in the second round, Jobs and Venue d’Fees des Hazalles tallied eight faults for a final total of 9.17 penalties, but a podium finish was a consolation to the 21-year-old riding in her first championship.

“It’s like a dream come true,” expressed Jobs. “I really wasn’t expecting this, especially to win a medal not only with people that I’ve looked up to in the sport for years, but with one of my closest friends; I can’t even put into words how happy I am.” 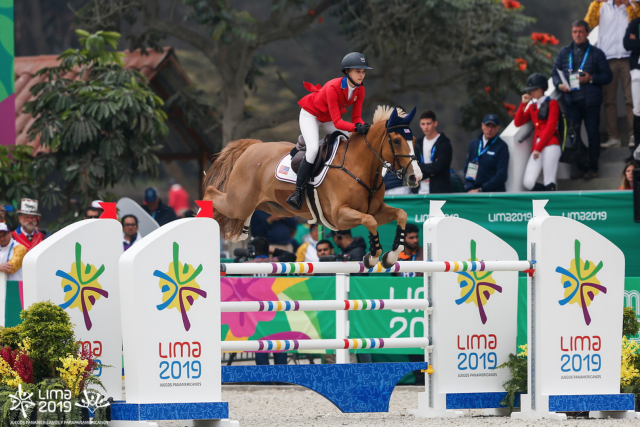 With two fences down in the careful line across the middle of the arena that challenged many competitors, Madden and Breitling LS ended with eight faults, which gave them eight penalties overall.

“I think there was maybe just a little lack of focus at the first fence [down] and that maybe distracted him for the second fence,” said Madden of her two rails. “I can’t really say there was any really big mistake there. I thought he jumped well both rounds, and it just didn’t go my way that round.”

As the most experienced rider on the team who has competed in four Olympic Games and is at her third Pan American Games, Madden pointed out, “I think the Pan American Games are a super stepping-stone to the Olympic Games. You get the same team atmosphere, the same pressure, trying to win a medal here. People get excited about it. I compliment this venue. It’s fantastic and they’ve done a super job. I think we have a great team here. It’s been a super experience so far, and we look forward to Friday.” 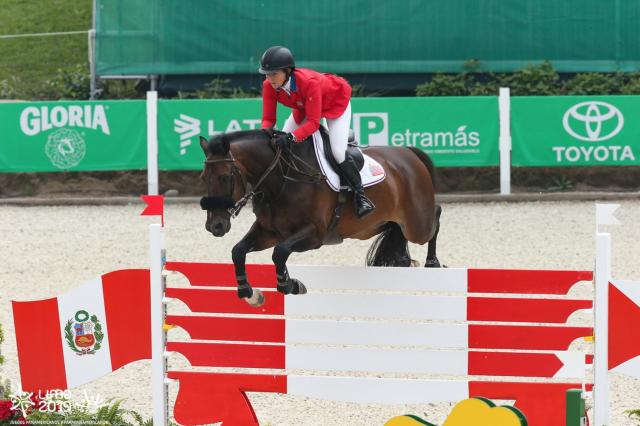 Beezie Madden, Lucy Deslauriers, and Eve Jobs will return on Friday, Aug. 9, for the individual final, in which athletes will compete in the first round at 12 p.m. EST and the top 20 return for a second round to determine the individual medals.