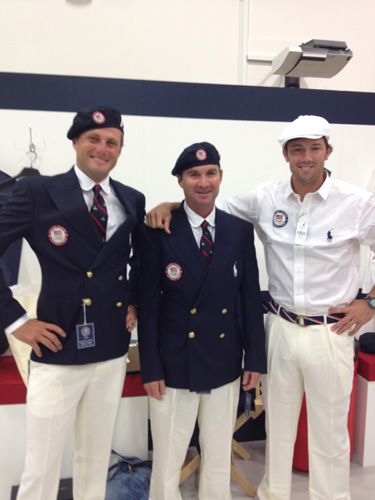 Eventing has some good looking men

According to my Facebook, my friends are at the movie theater. Yesterday during the walk breaks of my lessons, the girls were still discussing the merits of Team Edward vs. Team Jacob. Although, not all of my friends are at the movies. There are a small number wishing for this movie to be released just so the hoopla is over with and the world can finally move on. I put this to you Eventing Nation:  Is there a Team Edward vs. Team Jacob equivalent in the eventing world? Boyd Martin vs. Will Coleman anyone? Who are your favorites?

Shane Rose chats about his chances at defending his title at the Exhibition Eventing Grand Final at Equitana Sydney, and apparently he feels that being undefeated won’t help his chances tonight. In the interview he notes that the format there is different than eventing as we know it, but it’s great to get the public involved. “They’re not the same game, but they involve the same elements.” This way he  says we can bring the sport to the public audience instead of the public to our sport. [Go Shane!]

Mary King hits up Equitana Melbourne. She was so ecstatic when she learned London won the bid for the 2012 Games. Even though she’s been to six Olympic Games, London was still one of the best. She feels “very lucky” that she can share her horse occupation with daughter Emily and is very proud of her successes. The pride in her voice is evident, and Emily clearly comes from good stock. She won’t be staying for Adelaide, and noted that until the quarantine regulations are sorted out, there won’t be much chance of her competing as little handling of the horses for three weeks leading up to a four star isn’t the best preparation. As for next year, her eyes are on the European Championships, but she’s not sure about Kentucky. PLEASEEEEE come to Kentucky!  [Listen in]

No plans for the Fourth of July next year? Get your Barbury Castle Horse Trials tickets! They’ve gone on sale online or via telephone. Save money by booking in advance. Should be a fabulous time! [Barbury]

Want to get your Eventing Social fix sooner than that? How about in two days time? Tickets for the Scottish BE Ball are still available. It’s held at the Dunblane Hydro on November 17. Callanesh, a contemporary and Celtic band will be playing at eh Awards Ceremony. [Sounds wonderful!]

Horses are expensive and no one likes to waste money. However cutting corners in certain aspects of your horse’s care can be a waste of time and money, and cost more in the long run. Merial has launched a new website, EquineDrugFacts.com to help owners understand what FDA approval entails, generic drugs, illegally manufactured drugs and nutritional supplements. Granted, a lot of this information is linked to Ulcerguard and Gastroguard (Merial products), but the labeling information of FDA approved, etc is good to review. [USEA]

Awards season is rapidly approaching! The Equestrian Social Media Awards are starting to take nominations December 10. Mark your calendars and start nominating your favorites in a variety of categories. The ESMAs have introduced two new categories this year: Creative Equestrians and FEI Solidarity ESMA. The Creative Equestrians is  open to horse show organizers, photographers, marketing professionals, designers, etc. The FEI Solidarity ESMA is “open to equestrian development projects that are at the heart of grass roots development of equestrian sport and welfare projects.” [Learn more]

Eric Lamaze has two beautiful new ladies in his life. Mares Rosana du Park and Big Smile have joined his team. They were purchased from Gilbert De Roock of Belgium by Artisan Farm. Rosana du Park is a 2005 Selle Francais while Big Smile is a 2006 Westphalian. These two new additions have arrived in Wellington where Lamaze will start his 2013 season at WEF. [Horsetalk]

Hot on HN: Shania Twain enters Vegas in style… with a 40 horse entourage. If I told it like it was, girl needs some cross country lessons to get up those “steps”. [HN]

Best of the Blogs: Equitana is in full swing, Adelaide is coming up, and our Best Blogger today comes from Australia as well! Kate Chadderton has reflected on her season. She’s consumed 953 Redbulls, and talked on her iPhone for over 12 days while traveling 75,000 kilometers competing in 79 divisions on 12 horses. [Go Kate!]

Smartpak has lots of blogs to help with all your horsey queries especially now that we’ve hit the winter months.

No Shave November? If you weren’t in Pony Club, you should check out the different types of clip jobs to keep your horse happier and healthier in the winter months. Not sure if you should clip? Are you riding in the winter? Is your horse outside 24/7? Smartpak can help give you some guidance. [To clip or not to clip?]

Our own very fabulous Kate has already done a blanketing tips 1 and 2, Smartpak has blanketing fit tips of what to look for and what to avoid in blanket fit. They also have a couple brand recommendations based on the build of your horse. [Blanketing Uncovered]

After you’ve got your horse’s clipping and blanketing regimen all squared away, don’t forget to take a bit of extra time warming up and cooling out in these winter months. [5 Winter Riding Tips]

Their ColiCare program sounds like a no-brainer. Have your horse routinely seen by a vet (who doesn’t do that?) and fee Smart Digest Ultra to support digestive health for a $7500 colic coverage? Signing up is free and easy. [More information on signs of colic and the program] And check out the video: