EN Guest Blogger Brian O'Connor participated in Sharon White's fundraising event JUMP! Across the Pond last weekend. He kindly sent us his thoughts on a successful weekend. Stay tuned for much more from Brian as our "Behind the Mic" humor columnist over on Bloggers Row! 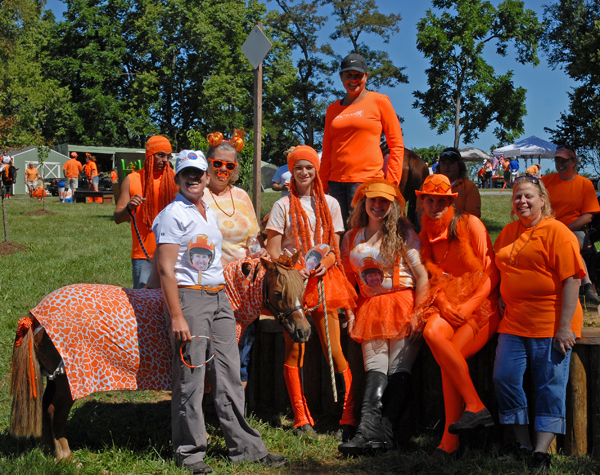 Team Orange! Photo by Sara Lieser
From Brian:
Well, to all the EN fans around the country (and the world) … “ORANGE” YOU SAD YOU COULDN’T BE PART OF THIS FUN?
We got up early to go to Sharon White’s fundraising party, Jump Across the Pond 2014, to help her raise money to take her great team of two-star and three-star horses to England this fall. She deserves the trip, especially after such a great finish to her 2013 season and solid performances through our spring tour this year.
This event is now getting bigger and better each time. The outpouring of support is tremendous, and riders come out from all over Area II to participate. The competition requires riders to do a derbycross type of outing: stadium jumps, then a series of cross country fences and then back to a series of stadium jumps again.
They are timed and closest to the optimum is the task at hand here; many divisions were topped by riders who were only one second or two seconds apart! In fact, Dr. Paula Horne, who is the official vet at many of the Leesburg area events, won her division by finishing right on the time exactly! And she won a bridle for doing so too …
Many sponsors, coaches, other events and organizers, and tack shops gave wonderful gifts to Sharon to either give as prizes or put in the silent auction for bidding. Sharon has raised thousands of dollars over the past five or so years, and the event is one of the most fun and hilarious days going!
I am sure you can see by the montage of photos that turning out in a special orange outfit was mandatory. There were so many to choose from,  it is hard to say which is the best. However, I do think the eyelashes, the dreadlocks, the spandex full body suit, the hats, and the face painting (and horse painting) all qualify for blue ribbons.
Halftime arrived and yours truly — who was challenged a month ago to a “ride off” between myself, Sydney and Mike Smallwood, and Glue Stick — was fit and ready to go!
We had been trading “smack talk,” videos, and verbal challenges over the last few weeks and now had to step up to the plate. We each had to jump at least two show jumps, five cross country jumps and, of course, had to negotiate the water jump!
Mike had a ringer up his sleeve: Olympian Phyllis Dawson’s niece, Phyllis Dawson Stearns, 9 years old, was Mike’s lead pony. She was adorable and full of energy! Needless to say, Mike and I tied in a draw (just like World Cup Soccer), and we were beaten out by our cute assistant. Go Phyllis!
The day was just too much fun to call it work. I played patriotic music throughout the event (July 4th and all, remember) and had some other music gems to go with special horses  (i.e. for the horse Bee Gee, I played “Stayin Alive”).
Put this event on your calendars for next year — it is not to be missed!
GO EN, and GO ORANGE! Thanks to Sara Lieser who “Chronicled” the day with her photos! 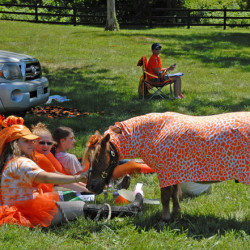 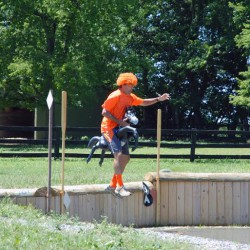 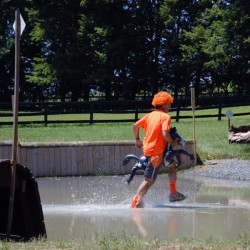 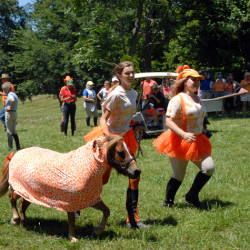 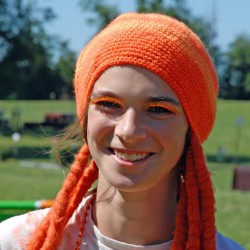 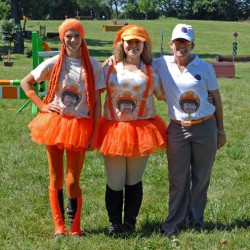 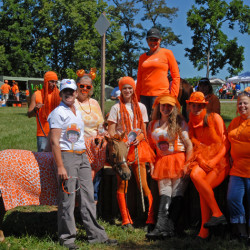 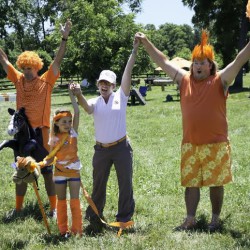 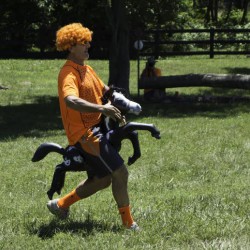