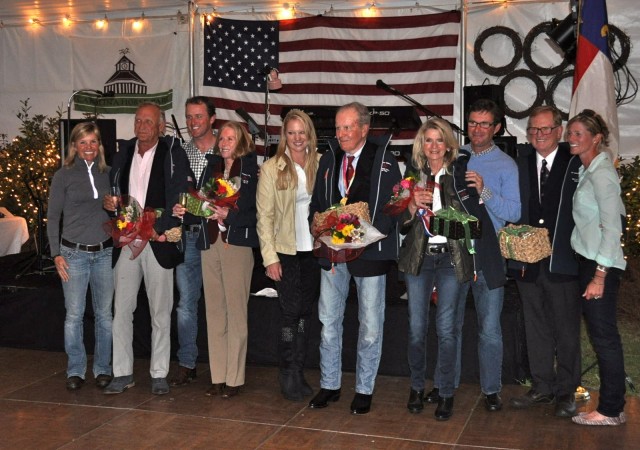 As the FEI divisions at the Carolina International wrapped up today, and Jenni and Sally went home, the rest of us attended the raucous and exciting competitor’s party here in Raeford, NC. Not only were the CIC divisions a huge success this week, but a big part of this competition was to honor the members of the 1984 Olympic gold medal team, and hope that some of their superstardom would rub off on all of us. The evening was filled with awards for the top riders in each FEI division, including enormous checks and giant smiles from the winners, and then we were treated to a speech from coach David O’Connor, and some very large applause for the 1984 Eventing team.

Before we go any further, I must send out an enormous congratulations to all of the winners this weekend and overall to everyone competing and participating. This event really has been a step above, and it’s been a pleasure to be here. This couldn’t have happened without a few key people. Karen Stives was incredibly generous in not only her recent donation to the US Eventing High Performance Team, but she also sponsored the CIC3* this weekend, and that was unbelievable. Jennifer Mosing was also instrumental in supporting many of the improvements and changes that the Carolina Horse Park made especially for this event, and has been an amazing sponsor for years to come. Last but not least we have to tip all of our hats to Jane Murray, the organizer sent from the heavens to bring us this world class event, who spearheaded the effort to really change the way we think about this competition, and take it up to a whole new level. To all of the volunteers who guarded the galloping lanes, yelled out order of go in dressage, and picked up poles in show jumping: we love you and you’re amazing, thank you for all your hard work.

In 1984, the United States hosted the summer Olympics in Los Angeles, and the equestrian portion was held at Santa Anita Racetrack. Our Eventing team was composed of four incredible competitors: Michael Plumb riding Blue Stone, Torrence Watkins riding Finvarra, Karen Stives riding Ben Arthur and Bruce Davidson on JJ Babu. In the end, they came away with a team gold medal, a performance that we haven’t been able to replicate since that time.

As our Team USA eventing coach explained in his speech, we’ve come to realize that our system isn’t working anymore, and we need to look for other ways of achieving success. The gold medal in 1984 was a reflection of the exact same moment in Eventing history, and those competitors went out there and performed against the best in the world, and won. The U.S. hasn’t seen a team gold medal since that time, and in fact the only medal of that color that we achieved after that was David O’Connor himself in 2000 on Custom Made. We’re hoping to change our system so that we can bring back the gold, and let the stars of our current times shine on an international level. Check out David’s speech below, courtesy of The Horse Pesterer!