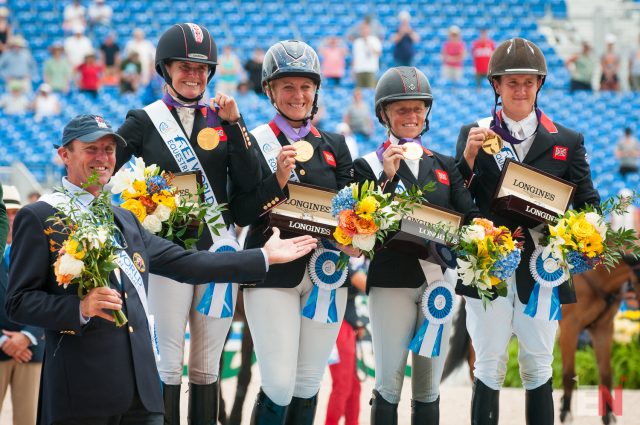 Great Britain’s team gold at the 2018 World Equestrian Games heads up an enviable list of successes the country has had on the world stage in David Holmes’ tenure. Photo by Leslie Threlkeld.

The news comes just months after October’s Extraordinary General Meeting, at which a vote of no confidence in both Holmes and chairman Paul Hodgson was put to attendees. Though a marginal majority voted to keep both men instated, concern was expressed at the primary causes of the vote of no confidence — that is, an ongoing and over-budget IT project, which saw the new British Eventing website launch only semi-successfully last month, and accumulated expenses of around £11,000, related to the new showcase event at Osborne House on the Isle of Wight. Concerns have since arisen regarding the future of the fixtures list, with the popular Brightling Park International one of the first major victims.

The new British Eventing season began on the second of March, and Holmes has made appearances at several of its fixtures, ostensibly to allow members a chance to voice their concerns and ask questions about the running of the organisation. However, many members feel that these appearances haven’t been sufficiently well-advertised.

British Eventing released a statement this afternoon, which reads:

“The Board of British Eventing thank David for his hard work and dedication, and wish him all the best for the future.”

Holmes, who intends to move to Italy later this year, and will continue in his post until the end of this month, says, “I have very much enjoyed my time working as CEO of British Eventing. I would like to say a huge thank you to everyone with whom I have worked over the last four years — the team of staff in the office and regionally, volunteers, organisers, officials, owners and sponsors; a key part of what has motivated me to drive forward great change in our sport is working with such a committed, hardworking and inspiring group of people.”

British Eventing has not yet confirmed a replacement for Holmes, though an update on the BE website by board chairman Fiona O’Hara confirmed that arrangements are in place to facilitate the transition. She also addressed some of the concerns that led to last autumn’s vote of no confidence.

“2019 has seen the much-anticipated website launch and with each week this is becoming increasingly stable as fixes and updates are made. I would also like particularly to thank the team in the office, who have continued to demonstrate their huge commitment and been unfailingly helpful to members who have contacted them.

“Looking ahead, we will continue to invest in IT and we will shortly announce the results of the fixtures review for 2020. I know there will be some disappointment, however this review was driven by the international and championship calendar and was also needed to ensure we have a geographically balanced and financially viable fixture list that will ensure the long term future of the sport.

“At HQ we will be simplifying some of the committee and team structures with the aim of improving efficiency and we are also strengthening our relationship with the BEOA [British Event Owners’ Association], EHOA [Event Horse Owners’ Association] and ERA [Event Riders Association] through the appointment of Non Exec Directors to work with them directly.”