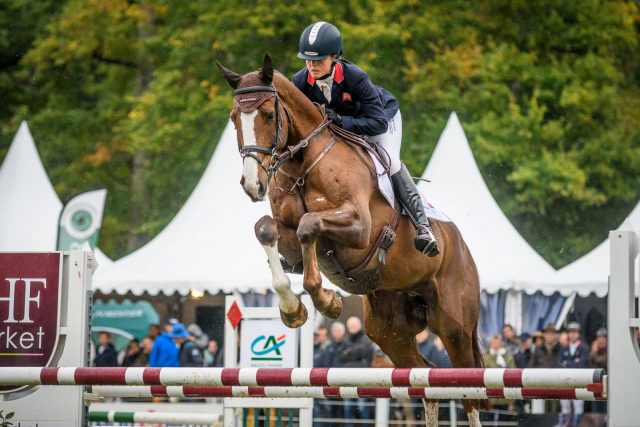 British Equestrian (BEF) has named the horse-and-rider combinations who will contest the World Breeding Federation Eventing Championships for Young Horses at Le Lion d’Angers, which hosts a CCI2*-L for six-year-olds and a CCI3*-L for seven-year-olds from October 15-18 in the Loire Valley, France.

Britain tends to be a force to be reckoned with at these championships, and will bring forward the maximum allowed entries of three combinations in the six-year-old class and twelve in the seven-year-old class. Among their nominations is Piggy March‘s Cooley Lancer, owned by the Lancer Stud, who took the six-year-old title in 2019.

The six-year-old selections are as follows:

The following combinations will act as reserves for this class:

The seven-year-old selections, with some still subject to achieving the required MERs (*), are:

British Eventing CEO Jude Matthews has also released a statement regarding travel to France for the selected riders and their support teams.

“The health and safety of our members, organisers, officials and volunteers is of the highest priority and those returning from France to the UK, under current government guidelines, will need to self-isolate on their return unless they are exempt,” she says. “The BEF provides exemption for Elite Senior Athletes and essential support staff on the BEF World Class Government funded programme. BE will currently provide exemption to those who qualify as an elite athlete where the status of the country in which they were competing changes whilst they were there and, only in a situation where an individual travels from one COVID-19 secure competition environment to compete in another COVID-19 secure environment in the UK.

“In addition, BE requires each person who obtains exemption to have a negative COVID test on arrival back in the UK before being able to compete. Those returning from France to the UK, under current government guidelines, will need to self-isolate on their return unless they fulfil the above exemption criteria. All athletes selected are being provided with the necessary information on quarantining and testing and we continue to closely monitor changes and updates to guidance and protocols in relation to travel.”

While this slightly conflicting advice doesn’t make it clear whether exemptions will be available or not — France is currently not on the UK’s ‘safe travel’ list, and so this would be unlikely to qualify as a situation in which the status of the country suddenly changes — it does appear that the British contingent, at least, are committing to an end-of-season trip to France, which bodes well for the only CCI5* of 2020, held the following week in Pau.