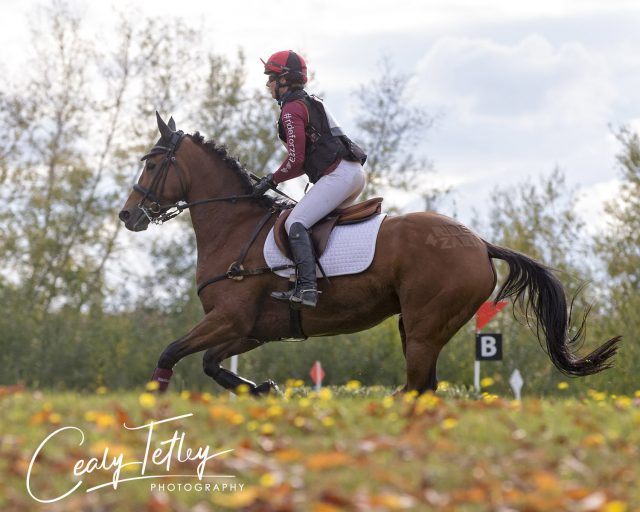 It was a weekend in which the eventing community came together to remember a bright young talent who was lost far too soon. Beloved Quebec eventing venue Bromont, which earlier this year saw its annual international horse trials vacated due to the coronavirus pandemic, played host to a small group of riders competing in CCI2*S through CCI4*S divisions. An Open Training division also featured during the beautifully run one-day event on Saturday.

Event organizer Sue Ockendon and course designer Jay Hambly, along with a host of volunteers and other personnel, dedicated hours of their lives ensuring every single detail for the event was in place. Even for a small contingent of riders, galloping lanes were meticulously roped off and each jump was tastefully decorated to give competitors a true international eventing feel. “It was phenomenal,” Holly Jacks-Smither commented. “They prepared it as if there were 50 horses in the four-star, and the footing was impeccable. Sue, Jay, and the organizing team really went out of the way to give us the opportunity to compete at this world class venue.” 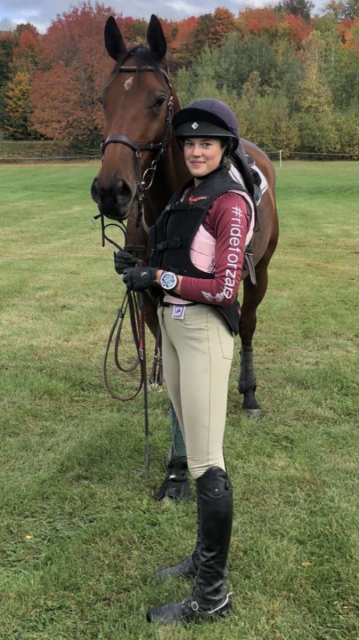 Visible among the competitors were the friends and barn mates of young rider Zara Buren, who tragically lost her life in a trail riding accident last month. Wearing burgundy shirts emblazoned with #RideForZara on the arms, riding horses who’s hind ends had been etched with the same messaging, these riders gracefully bore the extra burden of competing without their friend for the first time.

Holly Jacks-Smither, who was Zara’s coach, says she’s immensely proud of her team for handling the heavy weekend with grace. “On Friday afternoon, we all sat down to watch her memorial service and then got up Saturday morning with an angel on our shoulders,” she said. “Our barn has always been close, but we’ve become even closer through this. I was very proud of my girls, who showed up after such a traumatic week and put together an amazing weekend to honor Zara.”

We did it ! To say it was a tuff lead up to Bromont would be an understatement but we all clearly had an angle with us…

Ontario young rider Poppy von Maltzahn graciously wrote in to EN to share more about #RideForZara and the memorial fund that has been created in her honor:

“The entire eventing community suffered a massive loss when Zara Buren passed away on September 21, 2020. Her positivity and beautiful smile will be missed forever. Her friendliness was unique because it was so utterly genuine. She was the type of person who would say “good luck” to you at an event and really mean it. Zara was a talented, determined rider. She loved the sport and the people in it, but above all, she loved her horse. Anyone who watched her spend time with Vince could see that. Her kindness and selflessness are two traits we could all use more of. We would all do well to be more like Zara.

Several of us Ontario Young Riders U25 were eager to do something to pay tribute to Zara’s memory. We would love it if everyone could wear burgundy at an event and take a picture of it and post it under #RideForZara.

In honour of her life and the passion and joy she had for our sport, we’ve also collaborated with KC Equestrian Colours to create cross country shirts in her memory. The shirts are also in burgundy, Zara’s cross country colour, and feature #RideForZara on the sleeve. These shirts are being made at cost and with your purchase we encourage you to donate to the GoFundMe, which is raising money for an award in her name to support junior riders who show the same determination and love of the sport that she did.”

The Zara Buren Memorial Fund set an initial fundraising goal of $100,000, and at the time this article was published the donations had reached over $97,000. “Every trainer wants to have a student like Zara,” Holly said. “She exemplified horsemanship; at the end of the day, she was always the last one there, taking care of her horse. She was a special person, and her parents want to carry on her memory by supporting other kids who have that talent and drive but lack the financial support.” 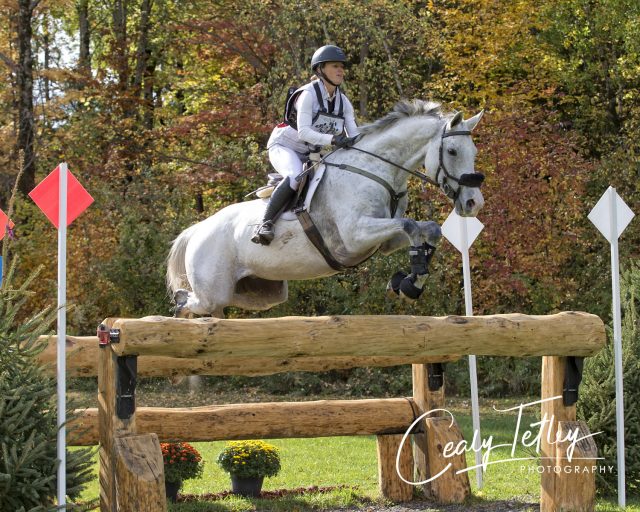 The CCI4*S division at Bromont ended up on the thin side after the withdrawal of four pairs following the first two phases. After initial leaders Colleen Loach and Qorry Blue D’Argouges elected to save their running for another day, it was Jessica Phoenix and Wabbit who would take the eventual win on a score of 60.8. Jessica withdrew three of her rides and retired Bogue Sound on course, leaving the door open for the 10 year old gelding owned by Jessica as well as Jim Phillips to earn his first CCI4*S win. His previous best finish at the level came at this venue in 2019, when he finished ninth overall.

Congrats to Wabbit on his first 4* win 🥇 🏆❤️🇨🇦!!!! Thank you Bromont for such a world class event!!!

The CCI3*S was won by Colleen Loach and FE Golden Eye, her partner for the 2018 Pan American Games in Lima, Peru. They added just a few seconds of time on cross country to complete their weekend on a score of 40.4. “I’m very happy with how my horses went,” Colleen told EN. “It was a great way to end the season, and as usual the cross country courses were top notch.” This has “Goldie’s” introductory season to the Advanced level; the 8 year old Hanoverian gelding owned by Colleen as well as Amanda Bernhard will now join his stablemates in a quiet remainder of the year, refining the basics and looking to come out swinging in 2021. 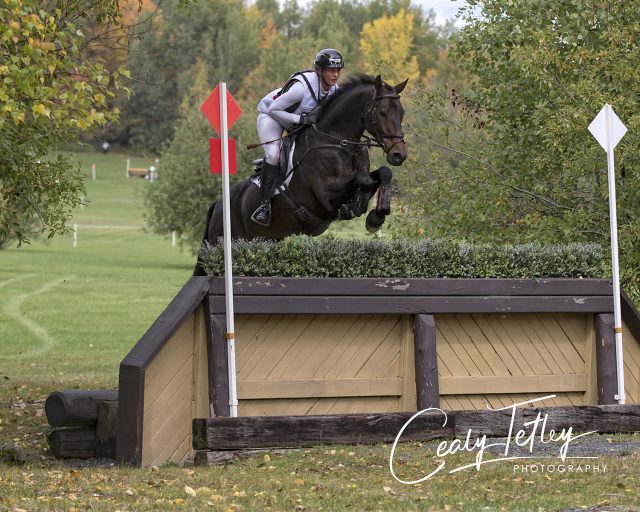 Holly Jacks-Smither was the CCI2*S winner this weekend aboard Candy King. The 10 year old British Sport Horse gelding has been a consistent performer for Holly, who acquired the ride in 2018. Holly finished her weekend with Candy King on a score of 34.7 with just time added on cross country. She’ll now aim for the CCI4*L at Tryon next month to cap off her year. 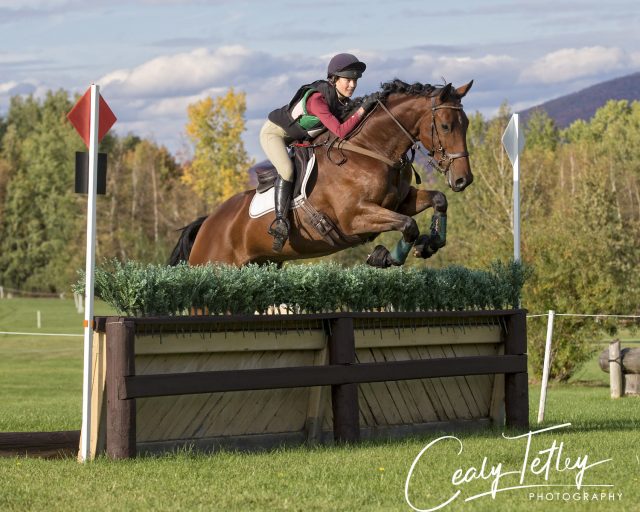 Last but certainly not least, Saffron Klotz and Balllingowan Clarity are the winners of the Open Training division at Bromont this weekend, adding no penalties to their dressage score of 34.5 to take home the win.

Many thanks to Cealy Tetley for providing the beautiful photos in this article. To view more of Cealy’s work, visit her website here.