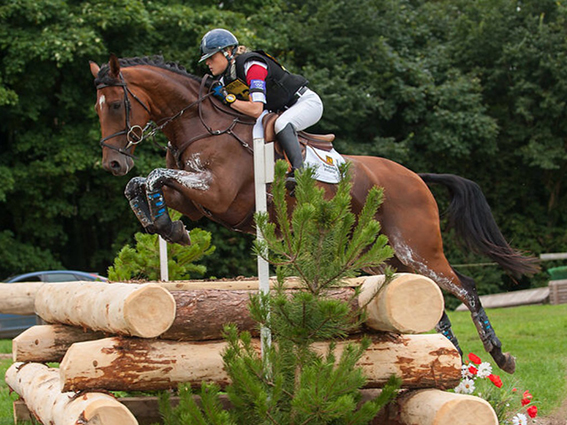 The fracture occurred on take off at fence 21, an open oxer. Belton confirmed to EN that a veterinarian attended to the horse immediately on course, and the decision was made to euthanize him due to the severity of the injury.

Camilla, who was uninjured, released the following statement:

“I am absolutely devastated and heartbroken to have to say goodbye in these circumstances but it was doing what we do best.

“Unfortunately BT Border Bandit, one of my top horses, suffered a severely extensive injury on course in the Advanced cross country at Belton Horse Trials and there was no option but to put him to sleep.

“Producing this horse from 3 years old up to three-star has been such an honour, and I will miss that cheeky face so much.

“You have been an incredible horse and I will always stand by that you are one of the most talented horses cross country I will ever come across. Sleep well, angel.”

Bred in Ireland by Ronnie Kelly, BT Border Bandit (Warcraft X Wanda XVI) came through the Goresbridge Go For Gold Sale, where Camilla’s mother Bridget purchased him as a rising 4-year-old because she loved his type.

Camilla produced BT Border Bandit through the levels, and they had five top-10 placings at two-star level, including a win at Ballindenisk CIC2* in 2013. They also represented Ireland at the World Equestrian Games test event at Haras du Pin in 2013, finishing 11th individually.

BT Border Bandit, or “TP” as he was known in the yard, stepped up to the three-star level in 2013 and delivered top-15 finishes at Ballindenisk, Cappoquin and Belton. He was also named to the Irish High Performance Squad in 2015.

The EN team extends our deepest condolences to Camilla, her team, and all who knew and loved this special horse. Rest in peace, TP.