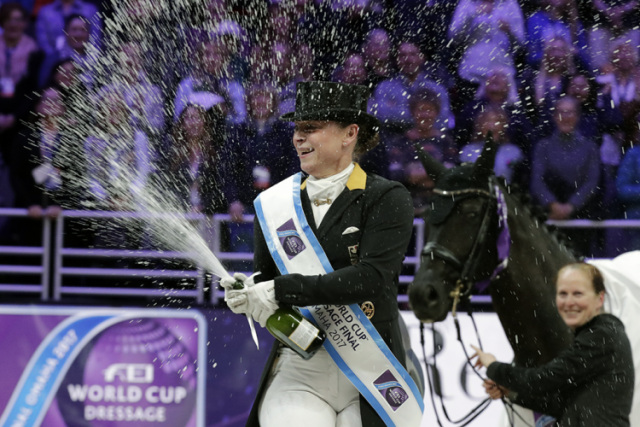 Jubilation on the podium as Isabell Werth celebrates her win watched by her groom Steffi Weigard and her beautiful mare Weihegold at the FEI World Cup Dressage Final 2017 in Omaha. Photo by Jim Hollander/FEI.

From Galway Downs in California to Belton International in England, with plenty of horse trials dotted in between, there was plenty enough action to keep an eventer busy this weekend. Meanwhile in show jumping land and dressage world, the cup runneth over, too.

The Longines FEI World Cup Finals for dressage and jumping just wrapped up in Omaha, Nebraska, with new world champions having been crowned in both sports.

In the dressage, Isabell Werth claimed her third World Cup title riding the incredible mare Weihegold, with whom she claimed Olympic team gold and individual silver at the 2016 Rio Olympics.

“It’s special to win again after 10 years, to come back with a different kind of horse and after a really great season,” Isabell said. “I’m very happy and I’m also thankful, because I know what it’s like to be downstairs, and I’m really happy and grateful to be upstairs again!”

On their heels was U.S. rider Laura Graves with Verdades, followed by British star Carl Hester with Nip Tuck.

In the show jumping, McLain Ward finally clinched the Longines FEI World Jumping trophy with the brilliant mare HH Azure. It was a victory made sweeter by the fact that it’s been a long, long time coming.

“I’ve been doing this for 25 years or more, and I’ve come so close so many times and one way or another I’ve messed it up,” McLain reflected. “I’m so grateful for my horses and the people around me like my groom. Lee, who has been with me for 29 years, they all helped me pull this off!”