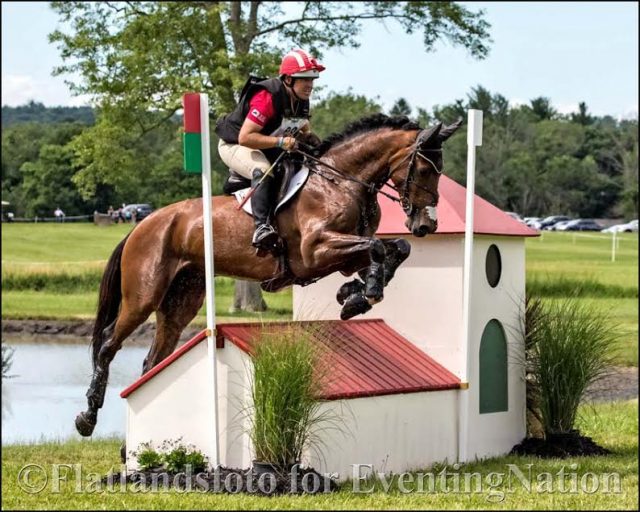 There was only a tenth of a point between dressage leader Liz Halliday-Sharp and second-place Buck Davidson after dressage, and another 0.1 still between Buck and third placed Boyd Martin — their scores were 31.7, 31.8 and 31.9 respectively, leaving none any room for error. Liz and Cooley Stormwater, a 7-year-old Irish Sport Horse gelding (Camillo VDL x Thornfield Calypso) owned by the Stormwater Group, were just a blink slow on the clock, picking up 0.4 time penalties to slip into second behind Buck and Victor B Z. The 10-year-old Zangersheide gelding (Victor E x Kanridge, by Kannan), owned by Carl Segal and the rider, finished in the top 10 in the one-star here back in 2016. With a rail separating the top 10 of this competitive division, show jumping on Saturday should prove an exciting finale!

Third-placed Boyd and Nancy Hathaway’s Fernhill Prezley picked up 20 at fence #17, a brush<ditch<corner combination, to drop down the leaderboard, leaving the door open for Liz to slide into third with Ocala Horse Properties LLC’s Cooley Be Cool. They posted one of 10 clear-with-no-time cross country rounds in the division, which will see 21 horses moving on to show jumping on Saturday. Alex O’Neal with Gayle Davis’ Pauldary’s Arctic Tiger and Sydney Hagaman with Sydney Hagaman’s Charmeur sit equal fourth, with Alex closer to optimum time should it come down to that. Can’t resisting leaving you with this pic of Alex and Ellie’s absolute doll-baby, Fiona!

Great start with Gayle Davis’s Arctic Tiger, 6th place after dressage with a beautiful xc track set for tomorrow..We are all loving the cooler fall weather😁🎃🍂🍂

Lauren and Vermiculus Still on Top in CCI3*-S

Vermiculus was probably wondering whether the jumps had gotten smaller of if he’d gotten bigger on cross country today. After three Kentucky five-star starts at the Kentucky Horse Park,  Lauren Nicholson and Ms. Jacqueline Mars’ 13-year-old Anglo Arab gelding (Sazeram x Wake Me Gently) are old pros and handily managed the CCI3*-S track clear and inside the time.

Mike Pendleton and Bonnie Stedt’s The Fonze Himself remain in second after cross country, one of six pairs in the 19-horse field to come home clear and inside the clock. Lillian Heard and Charmking LLC’s Charmking moved from fourth into third when previously third-placed Liz Halliday-Sharp and Cooley Quicksilver picked up just a smidge of time. Lillian also looked super in the CCI3*-L with her own Dassett Olympus and they’ll sit just outside the top 10 heading into the final phase.

Dassett Olympus in the 3L at Hagyard today. He was a 🌟🌟🌟.

Will and Unlimited Keep Lead in CCI2*-L

The top five placings remain unchanged after CCI2*-L cross country, with Will Coleman and Unlimited, a 6-year-old Holsteiner gelding (Uriko x Viona III, by Colman) owned by Team Rebecca LLC, still on their dressage score. Liz Halliday-Sharp is second with her own Maryville Sir Henry on 28.4, and Karl Slezak is third with his own Hot Bobo on 29.3.

Training through Intermediate horse trials divisions knocked out dressage and show jumping today. Hats off to Intermediate leader Phillip Dutton, who had five (5!) horses in the division.

I’m pleased with all my horses today. With that many one after the other you just have to do the best you can, and try to do the best job on each horse. I was trying not to overthink it! Carlchen was having his first run back for a long time and he’s such a sensible, good-natured horse that he just went in there and did his job as if he’s been doing it every week. Sea of Clouds has also come back from a little bit of time off and I was really pleased with him. His trot is getting better and he was really well-behaved. I think Quasi Cool is a very special horse: he’s got the movement and as his balance gets a little more uphill he’s going to really put in a cracking dressage test. MHS Fernhill Finale feels a little bit green at this level but I was pretty pleased with the way he was workmanlike about his test and just did the best he could. Beverly’s Clueso wins the Most Improved Award of the bunch! Each day he just gets a little bit better and I was really impressed with him. I thought they all jumped well. I just had the one fence down on arguably the best jumper, Quasi Cool, and that was my fault, I got him in a little bit close in the treble and then he had to stretch for the back rail for the next one but overall it was a good day. It was pretty quick and fast, we were done by lunchtime but I thought it was a good education for all the horses. Thank you to the organisers for accommodating all my horses in one division and running a smooth show all day. And thank you and all my admiration to our crew on the ground here who kept all the balls in the air, turning each horse out beautifully, on time and in the right place and are still smiling, we’re lucky to have such a wonderful team. One more thank you to our owners, it’s lovely to have Evie, Annie Jones and Caroline Moran here to watch in person but that doesn’t mean we’re any less grateful to those who are following along virtually. Cross country starts bright and early, and chilly (there’s a frost warning) Saturday morning, we’ll be aiming to get an early night and a good night’s sleep tonight.

Great to see Olivia Dutton leading one of the Prelim divisions as well! We know that Iniesta really means a lot to her.

Olivia @odutton_eventing is obviously fortunate that she’s able to use our experience and our facility but she does love it and she’s in it for the right reasons, and she puts a lot of time into her horses. Iniesta is really progressing well – he started out the year as a green novice horse and now he’s pretty competitive at the prelim level which is exciting. My good friend Mighty Nice is having his first run back for a couple of years and he’s very, very excited to be out. It sounds like he did a nice dressage test which unfortunately I missed, and he just had the one down in the show-jumping. It’s fun to see him back and he’s really excited about it, I can tell!

Andrew McConnon had an awesome day as well, leading Prelim B with D’luxe Steel and Training C with FE Caspian. He also jumped clear and inside the time on CCI3*-L cross country with Jeanne Shigo’s Ferrie’s Cello in the horse’s first outing at the level.

Dean was fantastic on the flat and jumped a double clear sj round heading into xc equal 1st place in the Open Prelim! 📸: @samanthalclark