The 2018 International Eventing Forum took place at Hartpury College, a leading education and competition centre in Gloucestershire, England, on the 5th of February. For a full report of the first session of the day, led by dressage guru Sandy Phillips, click here. 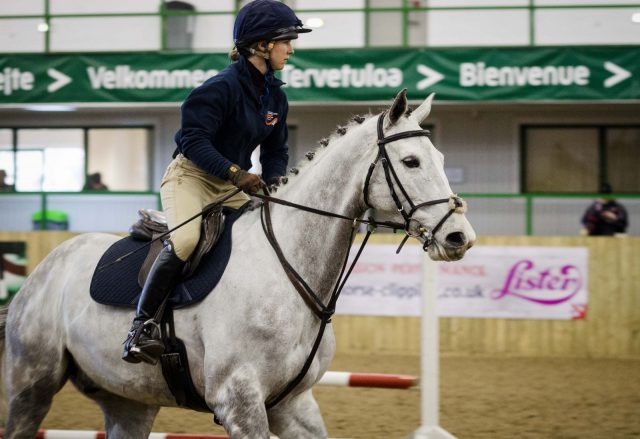 “The foundation allows for progress”: training the event horse over fences with Eric Smiley

IEF director, former Irish World and Olympic team member, FEI judge, international coach and BHS Fellow Eric Smiley took to the arena for the second session of the morning. This time, the audience was treated to an insight into working a young event horse over fences. Two of his guinea pig riders, too, were up-and-comers — Saffron Cresswell competed at the 2015 and 2017 Pony European Championships with Cuffesgrange Little Ric, and Chloe Rodriguez. Both young riders are students at Hartpury and members of its Academy programme, in which students with the potential to compete on the world stage are selected to train intensively alongside their academic work. Joining them was local event rider Lucy Russell-Dixon.

Eric’s session focused on the progression of education — namely, that it’s the rider’s job to understand what needs to be taught now, and what’s best left for later, and that as horse and rider progress through the levels, the thought process and subsequent reactions must get much quicker.

“The speed of thought is paramount in all sport,” he explained. “We need to teach these instincts to ourselves. It is essential for safety. If we don’t teach ourselves the right instincts, we can make bad choices which end in poor results.”

One of the first steps to good decision-making is to allocate responsibilities to both horse and rider. It is the rider’s job, says Eric, to choose — and stick to — a line, and to ensure that the canter is active and rhythmical. It’s the horse’s job to get over the fence.

But, of course, there’s a big difference between being able to maintain a line and rhythm down to a very straightforward single fence, and doing it throughout a complicated course with the additional pressures of competition. Getting from point A to point B, though, is just a matter of stacking the building blocks in the correct order, and taking charge of your education: only by responding correctly and consistently can you teach a young horse how to do the same. 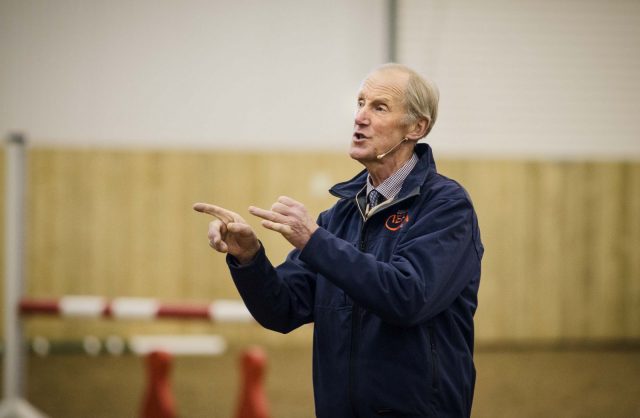 According to Eric, riders can be split into four categories. These are:

It is the two middle groups — the conscious riders — who need the most guidance, says Eric. The most inexperienced riders — the unconsciously incompetent — tend to make life reasonably easy for their horses, as long as they’re appropriately paired. This is because their horses are largely able to pack them around without much interference. Once riders reach stage two, however, they’ve realised they must improve to progress, and analytical thought comes into play. In the early stages, the conclusions of this analytical thought — and the speed in which they’re achieved — are often incorrect, and can result in an excess of incorrect information being fed to the horse. With correct training, however, the rider will learn to analyse and respond correctly, moving them to the third level — conscious competence. Poor coaching can keep riders in the second group indefinitely.

“Trainers should never just tell their students what to do. They should ask them questions, so they have to think about why they’ll do it,” Eric said. “The information we teach to riders needs to be cleared. What is foundation information? What can be left out? What needs to be taught now, and what can be taught later?” 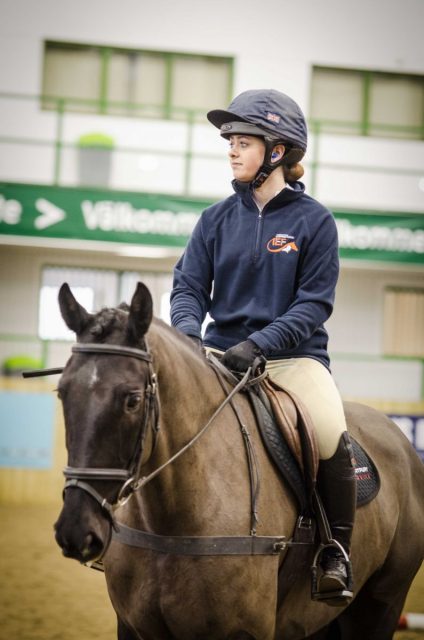 Eric then moved on to a simple exercise for the three assembled riders and their relatively inexperienced horses. The name of the game? Repetition of simple concepts, done correctly. This, he explains, allows a horse to ‘buy in’ to the learning process, meaning that he engages with it, actively participates in it, and enjoys it.

This is achieved by giving him the tools he needs to succeed — that is, by presenting him with a simple question with one correct answer, and minimising rider input enough that the horse can be allowed to come up with the answer on his own. This is then repeated, establishing the lesson and building the horse’s confidence in his own ability to problem-solve. Then, the lesson can be built upon and the challenge slightly increased. In this way, you can train a horse from his first fences to the highest levels of competition. 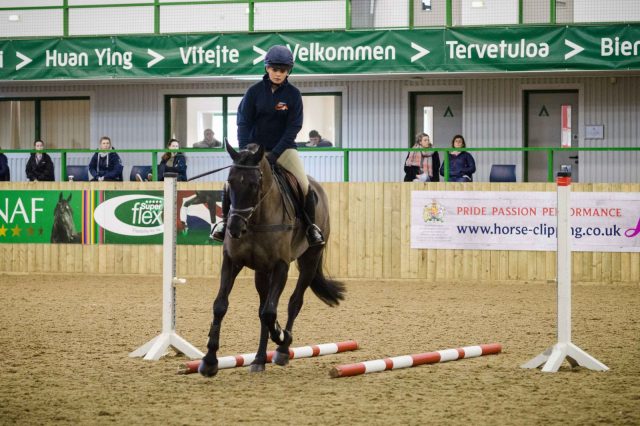 The exercise began on a 20-meter circle, on which two sets of poles had been placed at 6.00 and 9.00. Eric asked the riders to simply trot around the circle, aiming for a consistent rhythm and allowing the horse to relax and swing through its back. The riders had to trot through both sets of poles without changing that rhythm or having to drastically alter their line to get there. It was, explained Eric, rather more deceptively difficult than it looked.

Once each horse and rider pair had managed the circle smoothly, Eric made them repeat the exercise to solidify the lesson, and then they moved into canter. The end goal remained the same, and throughout the session, Eric’s system of getting it right and then repeating it in exactly the same way was used.

“You need to get the forward rhythm first and foremost,” he said. “Then comes straightness, and then you can think about the rest. The horse should genuinely be taking you — you shouldn’t be pushing him.” 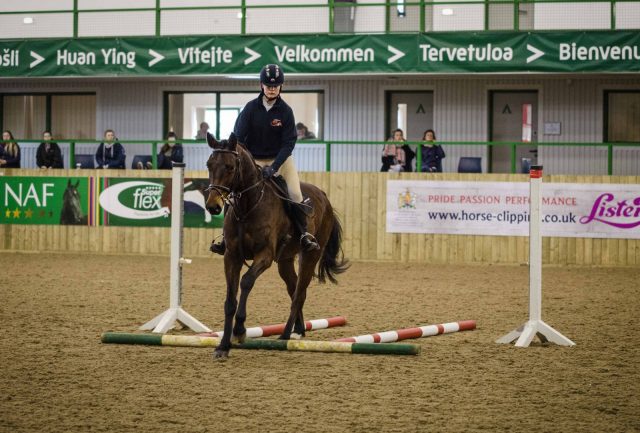 Chloe Rodriguez and four-year-old Saucy Contender get to grips with polework. Photo by Tilly Berendt.

The next step was to add a single canter pole to the end of one of the two channels of poles. Again, the key was to maintain the rhythm and the line, managing the canter if the horse wanted to rush towards the pole, and not being tempted to chase a stride. This step of the session gently teaches the horse to look up and ahead to a fence, and to make a decision about striding.

“It might not look exciting, but it’s exciting to watch how they respond to it,” Eric explained. The moment to look for, he said, was the moment in which the horse looks down at the pole, thinks about where it is in relation to its stride, and makes the decision to move his feet. For this reason, he explained that he’ll pat and encourage a horse which balloons over the pole, because that shows a conscious decision about footwork — if, on the other hand, the horse barely notices the pole and trips over it, he’ll ask it to wake up and come to work.

Eric asked the riders to canter in a light seat, which, he explained, allowed the horses to figure out the solution to each question with minimal interference. The full seat, he explained, would come into play once an increased level of adjustment was needed — that is, when jumping courses.

Each progression of the exercise was similarly small but significant: next, Eric added a small upright at 3.00 on the clock face, reminding the riders to trust the exercise and just focus on the line and the rhythm. Then another fence went up, and soon, the riders were able to string together lines and courses with related distances, sweeping curves, and, above all, plenty of impulsion and confidence. 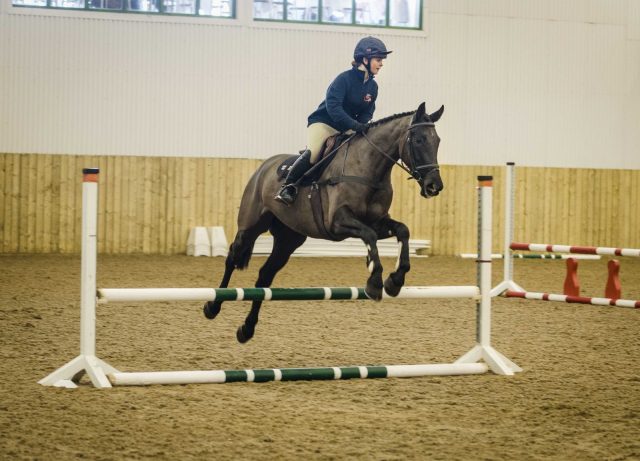 “Curves and circles are the bedrock of everything we do. The geometry of jumping is circles — gone are the days of fences on the long side and the diagonal. We need to be experts at riding loops,” he said. Courses, he explained, are simply a series of curving lines, and because modern course building gives very little time to regroup, maintaining the rhythm throughout becomes crucial to going clear. This rhythm is also crucial to learning to see a stride, which Eric says is one of the most common concerns in riders, and one of the concepts that trainers most struggle to teach. By sitting still and waiting patiently for a fence to come to you, he says, you’ll learn to instinctively feel a stride, and interference — or trying to do the horse’s job for him — will hinder this process.

“Anyone can find a spot to a fence if they pull, and choke, and lose the canter. There has to be a better way. It’s a real problem in our sport that we can’t explain how to see a stride.”

One of the final exercises Eric set up for the riders was to mark out a turn into a fence using small cones. Their trajectory into the fence must touch each of these markers — “if I make the riders focus on the geometry of where they’re going, they forget about the jump.”

This clear, linear progression from trotting through poles to jumping courses competently and confidently showed how straightforward the learning process can be, when presented correctly. The quickest way to impose limits on your horse, said Eric, was to ask him too much, too soon, diminishing his confidence and diluting his problem-solving ability. Instead, this method took the intensity out — each horse relaxed into his job, and was unsurprised to see a fence appear in front of him.

“If horses aren’t surprised by a question around a corner on a cross-country course, they buy themselves ten more yards to make a good decision,” he explained. This leads not only to a higher likelihood of a competitive clear, but to a safer round, too, and that elusive ‘fifth leg’.

Slow and steady does indeed win the race — and it removes those pesky limits, too.

We’ll be back with part three, in which leading performance psychologist Charlie Unwin explains how to use mental blueprints and focus flow states to expand the limits of your own competitive performance, and Swedish team coach Fredrik Bergendorff shares his top tips for clear rounds.