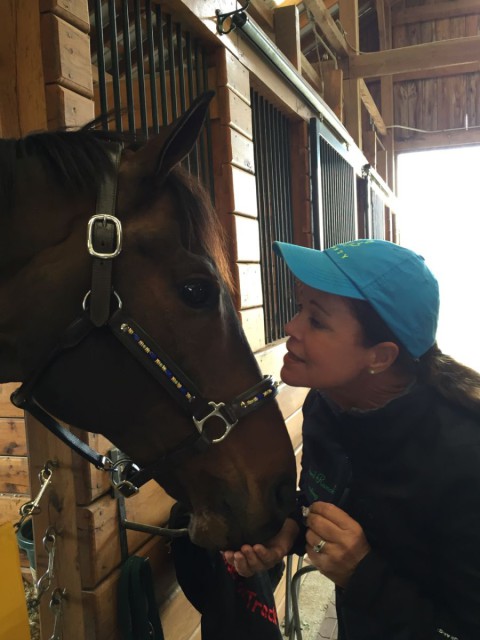 Bunnie Sexton and Rise Against are happily installed at Three Day Farm in Midway, Kentucky, and will ship to the Horse Park on Monday. Photo by Samantha Clark.

Bunnie Sexton and her little OTTB that could – the California-bred Rise Against known in the barn as Ecko – have arrived safely in the Bluegrass State, ready to take on the Rolex Kentucky CCI4* for a second time. Ecko looks about half his 17 years, and Bunnie told me proudly he continues to improve all the time, especially on the flat which has historically always been his most difficult phase. The most difficult phase for Bunnie this year might be the Horse Inspection as she’s dealing with a torn meniscus and so her daughter will jog Rise Against for her.

Bunnie manages to juggle being a mother (of four!) and a professional horse woman with such a wonderful sense of humor and calm, and seems to resonate patience, acceptance and joy — I don’t know how she does it, but I would dearly love to, and then bottle it and sell it! Second best is to be around her, and failing that…maybe this video?

Many thanks to Bunnie for letting me swing by and chat the morning after she arrived, and to Tanya Davis at Three Day Farm for letting me stop in. Bunnie and Ecko will ship to the Horse Park on Monday. Wishing them both the very best of luck this week!