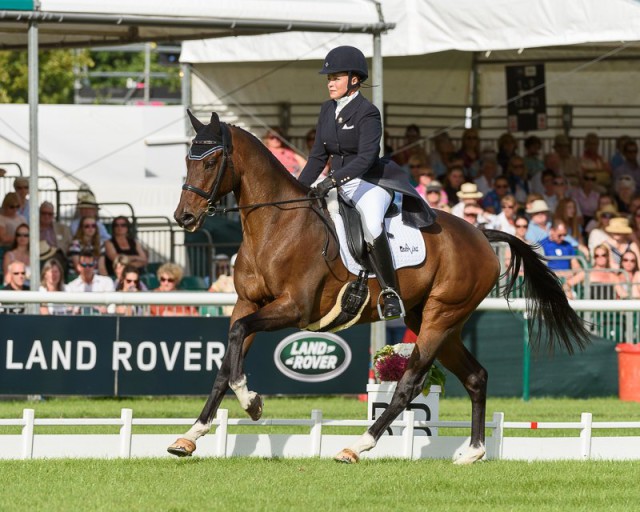 Bunnie Sexton and Rise Against. Photo by Nico Morgan Photography.

Bunnie Sexton may not feature on the top of the Land Rover Burghley leaderboard this evening, but you can rest assured she won over everyone’s hearts today. She and her little horse that could, Rise Against, the little 17-year-old OTTB that was originally sent to her as a project horse, went into the main arena and achieved a personal best of 61.0 at four-star level to sit in 29th place.

When she came out she fought to hold back the tears and emotions, explaining how much it meant to her to be here. “I’m just so, so grateful to be here and I’m looking so forward to the rest of the weekend. Since I was a kid Burghley was always THE event, but I never imagined it was a possibility.“The atmosphere bothered him a little bit more than it usually does as far as the crowd when I was going around, so I didn’t get him really though his back and really forward in the trot work, but as far as when he started to escalate I thought I did a good job of keeping it in hand because he can go from zero to sixty in no time flat, doing some very interesting moves across the dressage ring that are not appreciated by the judges so I’m very, very pleased overall.

“We took a lot of points off his Rolex score. We still have a long way to go but it’s headed in the right direction and it’s only his second show in a snaffle so I think we’re only going to get better and better now that we’re out of the double bridle. He came out of it a better horse and I definitely came out of it feeling like I’d made the right decision.”Looking ahead to Saturday’s cross country: “What a venue wow! I’m really looking forward to it! I’m going to go and do another walk, everything looks huge and impossible when you first walk it but he’s an amazing horse. I’ll have to feel how he feels about the changes in terrain, that’s my concern, and see how he deals with all the ups and downs and road crossings.

“It’s a beautiful course and I’m just really looking forward to having a chance to get out there and do it. I don’t want to get ahead of myself, but I’m looking at this as he may be 17 but there are still more Burghleys to come, and I want to go out there and be safe and bring home a sound horse.”

Bunnie talked a little bit about how Ecko came into her life: “He came to me as someone to tide me over while my other horses were getting better and he just trusted me and it’s just gone in directions that I never ever would have dreamed, and I’m just so grateful.

He means very, very well, he’s just really ADD and takes things to heart, so any shift in my weight, any movement in the crowd, anything like that means so much to him that I have to not be this emotional person when I’m on him. I have to calm myself down and make it seem like everything is safe for him, whereas out on cross country he does that for me so it’s a good trade. Because he was such the underdog I can’t help rooting for him like crazy. I’m not looking at the scoreboard, let’s face it, I’m here to really have a great time.”Day one of the 2016 Land Rover Burghley Horse Trials is already in the books, and we have both our U.S. riders turning in personal bests and Elisa Wallace and Simply Priceless sitting in fourth place overnight. We’ll bring you quotes from the press conference and more Nico Morgan pictures of the top riders later. Bettina Hoy and Designer 10 lead on 34.5, with Bill Levett and Improvise in second on 42.5, and Paul Sims and Glengarnock in third on 46.6.