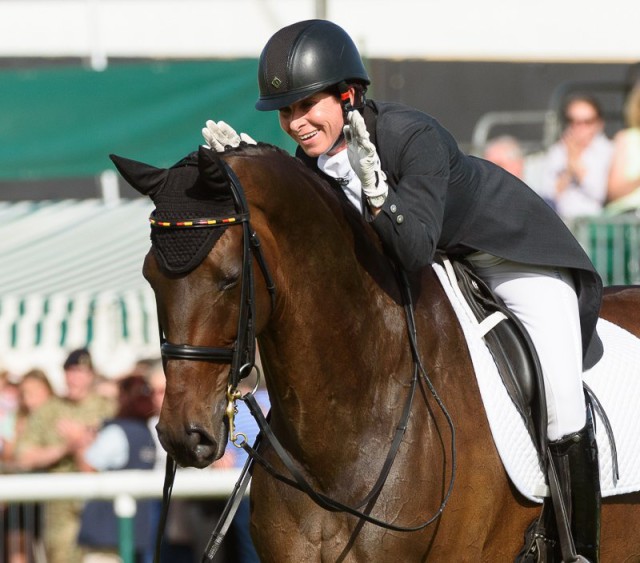 Bettina Hoy is always a force to be reckoned with in the dressage arena and today was no different at the Land Rover Burghley Horse Trials as she took a commanding lead with Designer 10 on 34.5, eight penalties ahead of Bill Levett and Improvise, who are a further four points ahead of third-placed Paul Sims and Glengarnock.

No one could begrudge Bettina any success though as she’s so delightful and always gives all the credit to her horse despite her beautiful riding. “He just felt great outside and actually great all week, and I’ve had some fantastic help obviously from Christopher Bartle our coach, but also my home trainer Sebastian Langehanenberg.

“We’ve worked a special programme out for him that works really well; when I feel him getting a bit excited in the last few minutes, I do rising trot and then he relaxes his back and lets me ride him much more in the test. He felt amazing today. I’m so excited and so happy for my horse because there’s not one horse that I’ve had that tries harder than him. He really wants to do the right thing, and I think he had a chat with his stablemate, Seigneur Medicott, who kept beating him in the dressage, and I think he wanted to show him he could do it as well!”

While she’s thrilled to currently be leading, Bettina said she knows anything can happen on Saturday. “It’s a very good score and it’s nice to be on that score but this is definitely not a dressage competition. This will all be decided on Saturday and Sunday, so fingers crossed. I don’t feel any pressure going into the weekend now because I just take every step as it comes; I’ve got great support here and I’m positive. I was hoping for a good dressage test and I’m excited to be here.

“I was a trainer in Rio (for Russian rider Aleksandr Markov) and was really inspired by all the great riders and fantastic horses I saw, and I feel really motivated. For me it’s very important to have a very good relationship with my horses because as an event rider you get into situations, especially on cross country, where they have to help you out.”

Burghley will always hold a special place in Bettina’s heart: “I won the European Championships here many years ago. I think the course is big, even the in-between fences are all up to height, maximum width. You do need to sit on a proper, proper jumper and they need to be really fit, as they always have to for Burghley.

“I’m glad I’ve done Badminton twice on this horse (and Luhmühlen once) and I’m glad I’ve had all these runs with him because they’re certainly important to attack a course like this. So far I would say I’m going to take all the quick options but I’ve only walked the course once.” 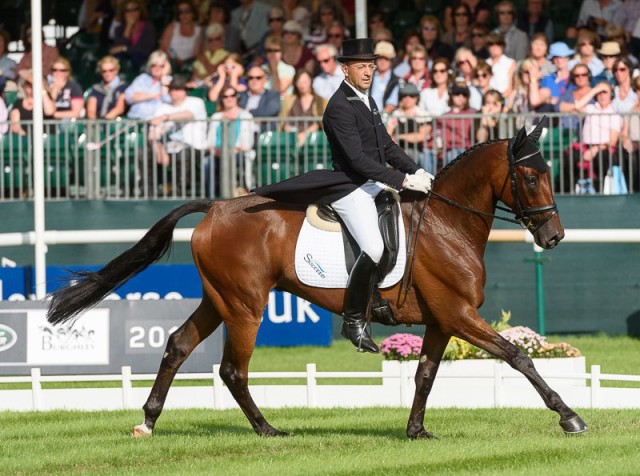 Bill Levett and Improvise are slightly adrift in second on 42.5, but Bill maintains there are still points on the table and that this 12-yea- old slightly quirky gelding has a lot of improvement to come yet. “It’s probably his best test at the four-star level so that’s really pleasing. I took him up to Blair last week and he did a 37 at three-star, and it’s nice to know there’a few more marks in there.

“I think he’s a potential leader after the dressage. He’s not easy, he’s quite a difficult little horse and I’m in second, so I’m pleased. There’ll be some very good tests tomorrow no doubt, but hopefully we can keep in touch with the leaders, and then around Burghley you’ve always got a chance.”

Bill has walked the cross country twice already, and this horse jumped clear here last year with just four time penalties. “It’s very strong … you’ve got to have a particular type of horse with engine and jump. My fellow has been around here before; I know he’s got enough stamina. You don’t want to bring a horse here if they don’t have enough stamina because the hills will find you out, and my horse has got that so I’m confident in him and hoping for a good run.

“The ground is for us which is great because if you get a lot of rain it can turn the whole competition on its head. Like always, you’ll have to give them a good ride round here, otherwise they’ll start losing their confidence. The rider’s responsibility is just as important as the horse’s around a course this size.”

Bill has had several top 10 four-star finishes but is still chasing that elusive podium finish. “I’d like to finish in the top three if I could. That’s always been an ambition and I’ve never done it; sixth is as close as I’ve got. Burghley is like one of our grand slams; it’s always one of the highlights of the year.”

This is Paul Sims’ third appearance at Burghley, and it worked a charm for him as he sits in third place on 46.6 overnight after a calm, professional test early this morning on the striking Glengarnock. “This is fantastic. I always knew he was capable of doing a test like this, but to actually have done it and be sitting here (in the press conference) is pretty incredible.

“We all try and target the big events for our best performances but it’s hard to get it all right on the day. I think possibly going earlier in the day helped. He’s been here a couple of times now and he was second to go last year. He’s been really relaxed all week since he’s been here; he was really relaxed this morning. He’s been working a lot more within himself, and maybe if I’d gone later in the day it might have been more difficult.”

Paul had just returned from walking the course, and he commented: “It looks as strong as it always does: big fences, big questions. We’ll see how it rides on Saturday!” 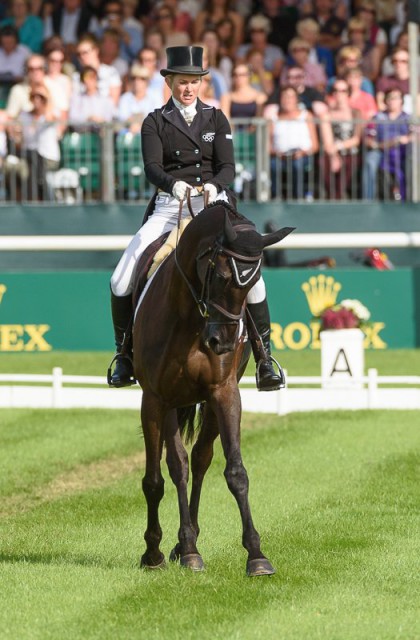 The ultra-competitive Jonelle Price came out of the arena and shrugged her shoulders after her test with Classic Moet, which left her in sixth place overnight on 48.5. “It was fine for me, probably a little bit more exciting for her! I don’t understand why horses think dressage is exciting but some do, and she does verge on that side but she tries and she did keep it together.

“She just perhaps didn’t show as much quality as we needed to. She’s a few marks adrift of her personal best which is probably the 45/46 mark. It’s not a million miles away, it’s certainly not a disaster, but naturally I would have loved to somewhere around the low 40 mark. Thankfully it’s a three day event and she’s going to be in the hunt. Aside from Bettina we haven’t seen anything particularly classy today.

“Tomorrow is another day, of course, but it is Burghley. The cross country is typically very influential here, the time especially. There were only two us last year that got the time and this mare was one of them, so hopefully if it pours with rain on Friday night then the cross country could play its part and we could be in the mix! She’s magic to ride cross country, she’s got experience at this level now so hopefully it’s influential and we can climb the leaderboard a bit.”

Jonelle followed Bettina into the arena but naturally that didn’t phase her in the slightest. “That’s the perks of living in England. We ride alongside each other day in day out, it’s just another day at the office.”

And how does Jonelle feel about riding at Burghley? “It would be my favourite competition on the calendar. It suits the brave and the bold. It’s absolutely beautiful riding up from the stables to the main arena every day past the house. It’s a really magical place, certainly when it’s bathed in sunshine like it is today.

“The Kiwis are a small but mighty group I would say. There’s not many of us, but everyone we have is very involved and very supportive. Both Tim’s mother and my mother are over from New Zealand for this week, so we’ve certainly got a good bit of support here.”

Finally, Jonelle shared her thoughts on Saturday’s course: “You certainly respect it as Burghley. The fences are big, every fence is big, and that can definitely have a cumulative effect so it’s important you get a good start and keep them confident and hope luck’s on your side.”

We’re also extremely proud of Bunnie Sexton, our other U.S. rider who went today, scoring a personal best of 61.0 with 17-year-old OTTB Rise Against to sit in 29th place. Bunnie was all smiles and happy tears after her test, and you can read her comments here.

Wishing the best of luck to all the horses and riders on Saturday, but we have a whole day of dressage to get through tomorrow first, including our three remaining U.S. riders and our adopted Brazilian rider Nilson Moreira da Silva. The day starts at 9:30am GB time, and Phillip Dutton enters the arena on Fernhill Fugitive at 10:26am (5:26am EST).

Nilson Moreira Da Silva and Muggle are first to go after the first break at 11am GB (6am EST), Libby Head and Sir Rockstar are half an hour later at 11:32am (6:32am EST) and then we wait for Holly Payne Caravelle and Never Outfoxed, the penultimate combination of the day at 4:18pm GB time (11:18am EST). Check here for the live stream link tomorrow. Signing off after a fantastic first day at the Land Rover Burghley Horse Trials and looking forward to Friday. Go Four Star Eventing!