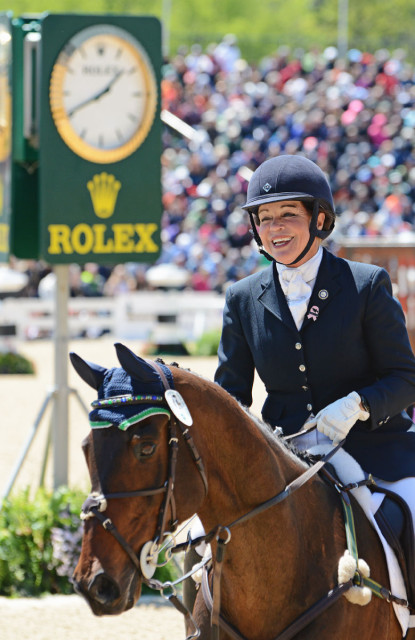 Bunnie Sexton’s original Rolex Rookie debut in 2014 may have been pushed back a year, but she finally got her chance last weekend after the stars aligned for her to have a nearly perfect weekend in Kentucky. Now, she’s become a heroine to the eventing community, showing us all that dreams are something you should always chase.

Bunnie, 54, and her 16-year-old OTTB, Rise Against, went on to complete their first CCI4* in stylish fashion, finishing 24th overall on a weekend that validated the hard work Bunnie has been putting in for years to get to this point.

“I was a nervous wreck,” Bunnie said of her very first Rolex horse inspection. “I was so afraid that the vets would see something I had missed. I knew I didn’t have anything to worry about, but I just couldn’t help thinking that I’d come all this way just to screw it up. Luckily they were kind enough to say he was accepted right away!”

“I couldn’t help but hope for a little better in the dressage,” she continued. “In the warm-up he had been so good, but then all of the sudden I went to use my spur for a lead change in our test and opened a can of worms.”

“Ecko” is a sensitive type, usually taking most of his cues from Bunnie’s seat and leg, so by using her spur he immediately became more tense. “He had been late behind in his practice test, so it was an overreaction from me to slide my leg back and use the spur when I usually just have to switch my hips, and he felt betrayed. From then on, it was just about trying to contain what I had.”

Rise Against hasn’t had a cross country jump penalty on his FEI record since 2013, and Bunnie’s intention was to keep it that way as she prepared for her first Rolex cross country. With the weather keeping riders on their toes in the days leading up to Saturday, Bunnie felt the nerves returning in anticipation of her draw spot about halfway through the field.

“By the time I went, it was getting a little scary,” she recalled. “When I went to the warm-up, they told me I needed bigger studs, but I had put in all I had. We’d try to buy bigger, but there were none. So I just decided to go cautiously — and I was so surprised to find how normal it felt.”

Indeed, Bunnie and Ecko cruised around a soggy cross country course in true style, looking like they were having the time of their life out there. “I expected to go out there and get by on the skin of my teeth,” Bunnie said with a laugh. “But by the time we got to what I was calling the ‘Voldemort jump — the jump that shall not be named,’ the coffin — I thought ‘Oh my God, I have a four-star horse.'” 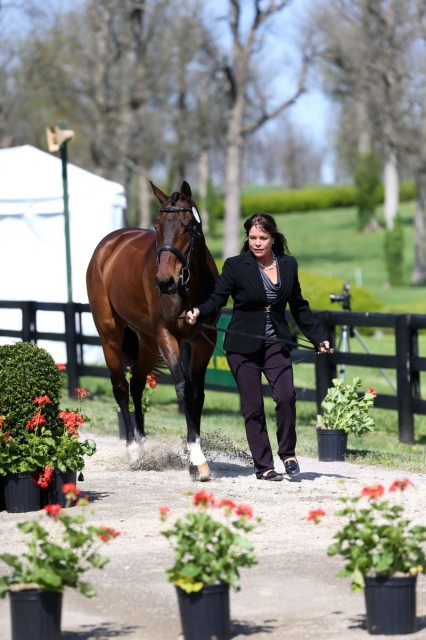 Bunnie Sexton and Rise Against. Photo by Kasey Mueller.

“I honestly did not expect to go clear my first time,” she said. “I didn’t try for time; I wanted to go fast but we did slip a little coming out of the Hollow so I eased up a bit as I’d heard it was a little worse coming home. I think it’s really prudent not to clock watch on your first time, and I didn’t want to do anything to hurt my horse so I made it a point not to look at my watch.”

The pair ran like veterans, gaining more and more confidence as they went. “It just made me so proud of him and proud of myself, to see that the hard work I had been putting in was validated. In the past, I would have shortened to some of those jumps and chickened out but I went out saying that forward was the way to go, and I’m proud of myself for not picking him into everything.”

Show jumping day dawned, and once again Bunnie and her OTTB were accepted on presentation to the ground jury. Now just one phase stood between them and their first Rolex completion.

“There’s a little of a backstory behind our rail in show jumping,” Bunnie laughed. “In the warm-up, there was a tarp to help people with a liverpool type jump. I had jumped the jump next to it right as someone was picking the tarp up, and Ecko got a little nervous. So then I got paranoid that my horse was going to stop at the liverpool — which he’s never done before — so I got too aggressive and overrode that jump in the arena. The poor guy had no chance.”

Aside from that small bobble, though, Bunnie and Ecko jumped a lovely round with just the four penalties added to officially complete their first four-star together. It was a heady moment for Bunnie, who just felt privileged to be there.

“A big standout moment for me was coming out of the ring and seeing my daughter, who is a rider herself and has had her share of setbacks, and knowing that my weekend had made things seem possible in her mind,” Bunnie said. “The coolest thing I’ve gotten out of this is the people in their 20s who come up to me and say they thought they wouldn’t have an eventing career due to their age or having kids — and that’s crazy!” 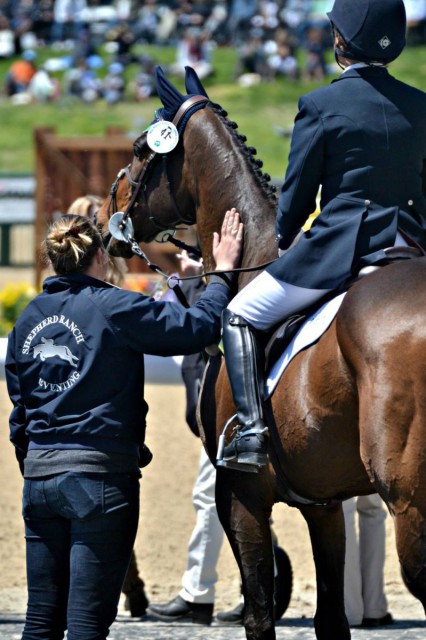 Bunnie and her daughter, Maddie at the show jump in-gate. Photo courtesy of JJ Sillman Photography.

Bunnie is already planning her second turn at Rolex, where she hopes to show the judges that she and Ecko can put in a competitive dressage test. That will be her homework for the rest of the year, after a well-deserved vacation for Ecko, of course. She’s also got her sights set on a four-star in Europe at some point.

At the end of the day, Bunnie is happy to have her first Rolex completion under her belt, and she was never seen without a beaming smile on her face the entire weekend. “I just had so much fun,” she said. “I’ve never met an office staff that was so patient with all of my ridiculous questions — they anticipated what I would need as a first-timer and were really, really great to me. Everyone was so helpful, even though we all compete against each other, and I just had the best time.”

Bunnie continues to be an inspiration to eventers from all walks of life, and she definitely made some new fans this weekend. For her, the weekend was a big success, and she just feels happy to have had the opportunity. “The point of any athletic endeavor is to inspire, and to have that kind of effect on people’s lives is truly an honor. I feel privileged to have been there.”