Emily Dunn grooms four-star horse September Bliss for Ireland’s Elizabeth (Esib) Powers.  Emily is also known as Meg Kep’s “partner in crime” during this summer’s stay at Maizey Manor.  Esib and September Bliss were on track for the Olympics, but like Sinead Halpin and Manoir de Carneville, they did not make their country’s team.  So, like Sinead and Tate, they re-routed to Burghley.  Emily was kind enough to give a recap of their Burghley weekend, and once again we see how strong the support is for the Maizey Manor Team.  Thanks to Emily for writing, and thank you for reading. 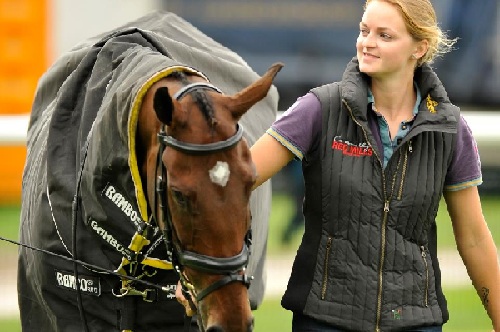 Emily and "Seb," photo courtesy of Will Baxter

Just as it feels like the summer is officially over, the sun comes out here in England, I’m not complaining, obviously, but now that most of the overseas Maizey Manor visitors have recently departed, the yard is definitely quieter, and the eventing season feels like it is winding down. My fellow wine connoisseur Meg Kep was the last to leave on Wednesday, with Sinead Halpin’s recently purchased herd of horses. It was sad to see a good friend leave, as without Meg around this year I think things could have got a whole lot darker at certain points during this season, although I’m now hoping that come the end of September both my liver and bank balance will be looking a lot healthier.

Tuesday morning was the mass exodus from Maizey to Burghley Horse Trials, with four grooms, four riders (Esib Power, Sinead Halpin, Allison Springer and Bettina Hoy), three cars, one trailer, one lorry and Cooper all heading north for the week. Before we left however there was one slight difference of opinions between Esib and our American co-pilots. The trick to packing and travelling with Esib is to be quick, concise and clean, which is why when Meg asked where to put their unwrapped bales of hay, we nearly had a full scale heart attack in the middle of the yard, a small debate later we were on the road……. minus the hay bales but Irish-American relations still intact.

PHASE ONE: We had arrived, safely, excitedly and inflated with confidence for the week ahead, which was quickly deflated by one trot up later. This was our most nerve wracking phase of the whole week. September Bliss by all standards is not a show off, this resulted in a wobbly first trot, followed by detention in the holding box, a re-inspection, the longest rejected or accepted decision in the history of eventing and me vomiting quietly in the corner. What felt like an hour and a half later we were accepted and allowed to proceed to the next phase, which for me was drinking a large cocktail.

PHASE TWO: Dressage day for us was thankfully a lot more uneventful than the trot up, Seb was relaxed and produced the best test he is capable of, at this time in his career, which resulted in a pleasing score of 51.9. That night it was on to the cocktail party where I was kind enough to let everyone in to my home, and serve guests Champagne in the beautiful surroundings of the library. And by my home I mean Michael Cecil’s, the 8th Marquess of Exeter, and by homeI mean Burghley House, I can but dream. On the final day of dressage we witnessed Team Maizey whitewash the leader board, with Sinead in 1st, Allison in 2nd and Bettina sitting on a score of 49.0.

PHASE THREE: Cross country day. I know everyone talks about how big the course is at Burghley, but I feel that until you have walked up to those fences and witnessed it for yourself, television, photographs and imagination do not even bring you close to the size of them. Nerves were abundant that morning, particularly because someone decided watching ‘Thrills and Spills’ was appropriate viewing the night before cross country. So after several hours of lubricating and taping up Seb, and me pacing the stables we were ready for cross country.

The first fence we got to see Seb tackle was the Leaf Pit, and it was the fence that they picked up 20 penalties. It was nothing more than bad luck, he landed back end first off the drop, got it together, unluckily he slipped behind on the slope and simply ran out of impulsion to make it over the final element. They stormed around the remainder of the course both came home, safe, sound and a stronger combination for it.

Relieved and happy that Esib and Seb were both home O.K. we watched the rest of Team Maizey cruise around the course, with Sinead keeping hold of her overnight lead. Cross country day over, it was time to relax, enjoy, what for the Team, had been a successful day with three of our residents inside the top 20.

PHASE FOUR: As always on a Sunday it was an early morning, there was no way Seb’s second trot up was going to follow the dramas of the first. My brilliant piece of advice just before they hit the trotting strip, ‘RUN FASTER’ surely did the trick and he sailed through without hesitation from the ground jury.

PHASE FIVE: Ecstatic to have made it to the final phase of Esib Power’s Five Stage Three Day Eventing it was onto show jumping. Seb’s show jumping is without doubt his most impressive and strongest phase of eventing, but on Sunday morning he was the politest and easiest to ride I had ever seen him in a show jumping ring. Which unfortunately in Seb’s world meant that he was tired and he sadly pulled four rails, but even so we had just completed Burghley horse trials.

With Burghley over it was time to reflect on what had been an amazing but emotional event, with Esib crying when Meg tried to pack hay, me crying when we nearly didn’t make it past the first trot up, Esib then cried four times whilst watching P.S. I Love You on Wednesday night, we all cried at Sinead and Tate’s dressage test and the end of their cross country and Meg cried every time she realised that Tate was in first place. The tears didn’t stop there as it was clear Maizey Manor had blown all other competition out of the water to win GOLD in the Team event. Admittedly we were the only yard to send a team, and there wasn’t actually any‘Yard Team Event’, but still, with Sinead 2nd, Allison 6th and Bettina 10th we were taking it.

Finally, thank you to everyone that helped make Burghley happen for Power Eventing, especially Jackie Green and Jessie Foster, also thank you to Esib for not falling off and congratulations to SINEAD HALPIN EVENTING! Now all put your hands in and ………GO TEAM MAIZEY! 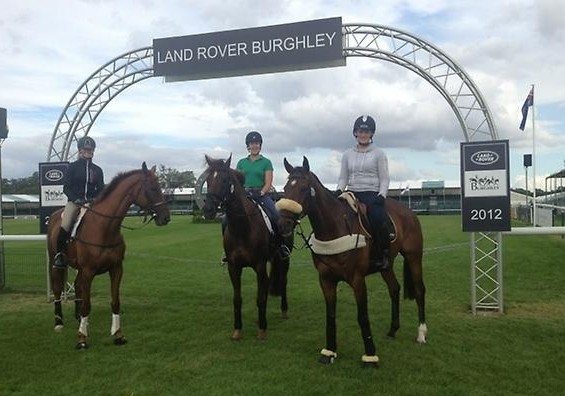 The Maizey team at Burghley