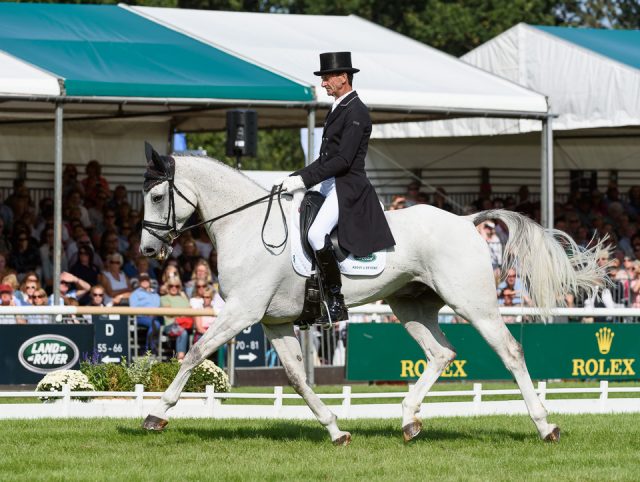 The final session of dressage was always set to be an exciting one, with some of the top combinations in the competition coming forward in front of the ground jury. Historically, we always tend to see slightly more favourable marking on Friday afternoon — but over two days of competition, we witnessed a grand majority fall in the mid-30s bracket, with arguably conservative scoring across the board, and very few riders earning coveted 9s in their tests.

The Townend stronghold was shaken up by a strong showing by the Kiwi contingent today. New Zealand riders have historically been enormously successful here — in fact, they can claim 13 of the last 30 victories at the event.

Mark Todd is one such Kiwi rider who is no stranger to the top of the leaderboard, with five victories to his name. Sixth at Badminton with a 23.4 dressage, his eleven-year-old Irish sport horse Kiltubrid Rhapsody has demonstrated a remarkable consistency and ability to perform in his 2018 season. Today, he didn’t fail to deliver, earning a 26.4 to storm into the lead, finally usurping Oliver Townend and MHS King Joules, who have led since the start of the competition. 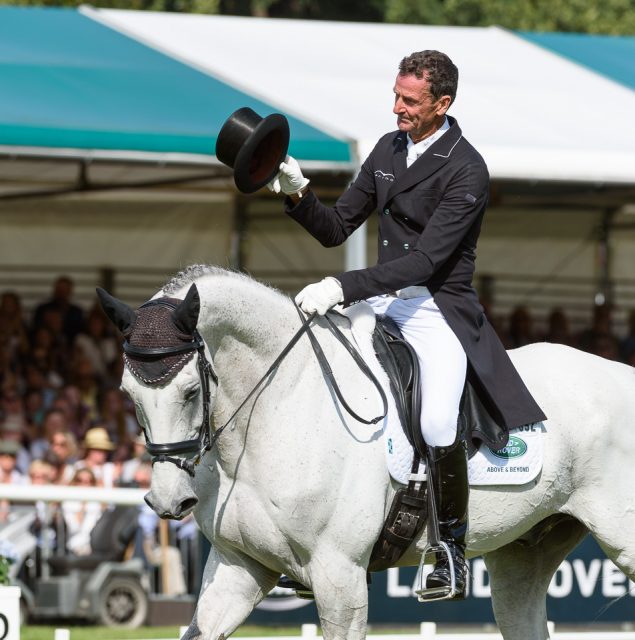 “He was very good — I’m very pleased with him,” said Mark, who also sits in 12th place with NZB Campino, despite two errors of course. “He just keeps getting better and better. He’s got a wonderful temperament; he can go out there and it just doesn’t bother him at all. He actually got a bit nervous in the collecting ring, as there was quite a lot of noise around, but you can’t really hear it when you get in the ring, and he settled back down.”

A minor blip in the extended trot prevented Mark and ‘Raps’ from matching their Badminton score: “He skipped a bit there, which he never does, but for his level of training I don’t think he could have gone much better. Bless him — he just loves showing off in there.”

This will be Kiltubrid Rhapsody’s first trip around the Burghley course, and the second consecutive year that Mark finds himself in the lead after this phase. Last year, he and Leonidas II led the way, but their competition came to an unfortunate early end when the horse stumbled upon landing from a fence, ejecting Mark out of the front door and leaving them with a long walk home. This year, he intends to avoid a similar disappointment. 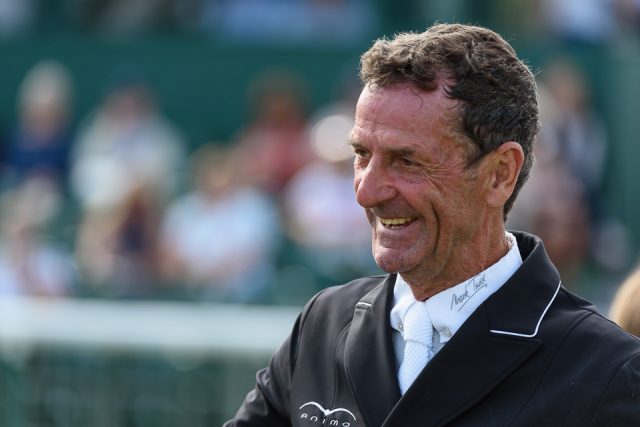 Mark Todd is all smiles on the hunt for a record-equalling sixth win at Burghley. Photo by Nico Morgan Media.

“I’ve been fortunate enough to have a few wins, and of course, you’re always looking to win another one — and I probably won’t have too many more chances. I wouldn’t say Burghley is his ideal track, but he’s a real trier and just keeps galloping and jumping, so we’ll see. There’s a long way to go yet. He’s fitter than he was at Badminton, and a bit harder now, but this is a different kind of track with a lot of hills.” 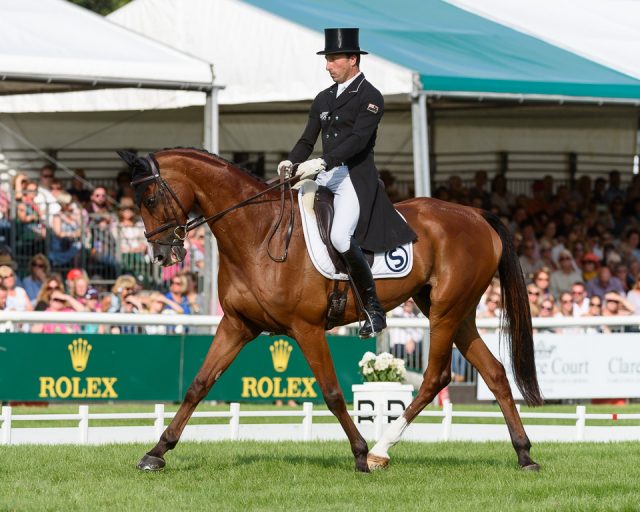 Mark’s fellow countryman Tim Price set an early precedent for the week to come, producing a 26.9 with Ringwood Sky Boy. Tim, who won Luhmühlen CCI4* in 2014, has had several good results here with ‘Oz’, including a fifth-place finish last year, fourth in 2016, and second in 2015.

“I had high hopes for him — we’ve been here a few times, but it hasn’t necessarily always been an upward curve in terms of improvement,” he said. “It’s been slightly snakes and ladders with him, but not today — maybe now that he’s fifteen, he’s maturing and we’ve figured him out. I’m mostly pleased that we stood still three times! He went sideways at Rio and has done it here, and if you can’t stand still, you can fall down the scoreboard pretty dramatically. He just tends to get a bit excited and can’t contain himself, but he went in their and stood quietly.”

Oz wasn’t always an obvious upper-level contender for Tim, who bought the horse as an ‘unruly’ six-year-old, with a proclivity for rearing and bolting, and for the princely sum of £3,000. 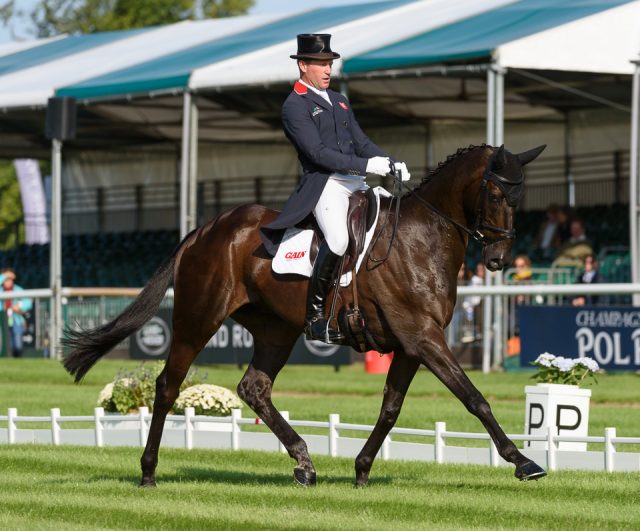 Oliver Townend‘s long-term leader MHS King Joules sits in third place going into cross country, the highest-placed of his three-pronged attack here. His reigning champion Ballaghmor Class was the last horse to enter the ring today, and while we didn’t see quite the quality of work that led to his remarkable 20.8 at Badminton, he delivered a respectable score of 27.9 to sit fifth overnight. Oliver also holds seventh place with his Badminton runner-up Cooley SRS, putting him into an enviable — if highly-pressured — position going into tomorrow.

“Ballaghmor Class’ test didn’t quite come off how I was hoping it would come off, but we’ve won big competitions from worse positions, and we’re only a couple of seconds from the top,” he said. “For him to be that cool and walk so nicely is a real testament to the horse — I have no complaints at all, I’m delighted with him.” 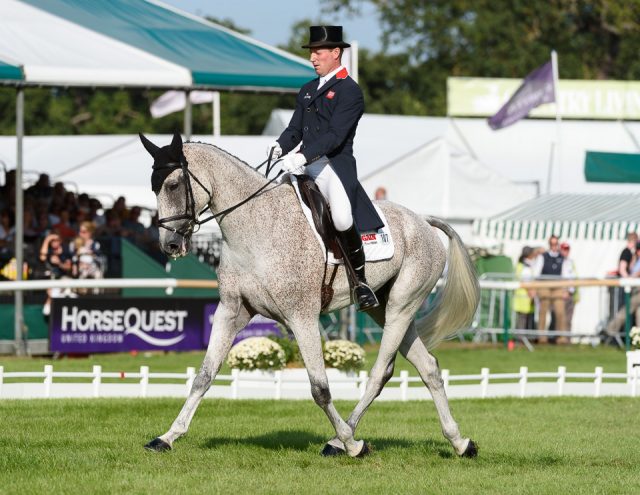 Oliver may have his hands full, trying to analyse and plan his way around Captain Mark Phillips’ tough track with three very different horses in mind, but he’s no stranger to piloting an impressive number around a top-level track. Nor does he register the external pressure to deliver a result in the wake of his exclusion from the World Equestrian Games team, a hot topic on everyone’s lips this week.

“I love coming to Burghley, and I don’t really think I need to prove any points. I’m here to enjoy it, and to enjoy my horses. Burghley is very special in my heart, and to come with three horses who I love riding is a special and unique position to be in. I’m unbelievably happy with all three of them, and all credit has to go to the team behind the scenes — having three horses looking great, feeling great, and performing well at Burghley is a tough job. Now, if all three can stay on the same scores, I’ll be doing somersaults!”

Australia’s Bill Levett made a late entry into the top ten riding Improvise, who was 6th here in 2014.

“He was good, but they didn’t love him — I was hoping for a 27 or a 28, but that’s the way it is! Like many horses, he anticipated walking on the final centreline, but we so rarely have tests where they have to transition from canter to trot there. We’ve been working with [Australian dressage rider] Gareth Hughes once or twice a month, which just keeps us improving and aware of what we’re doing. Frankly, the more you walk the cross country course, the less upset you get about dressage!” 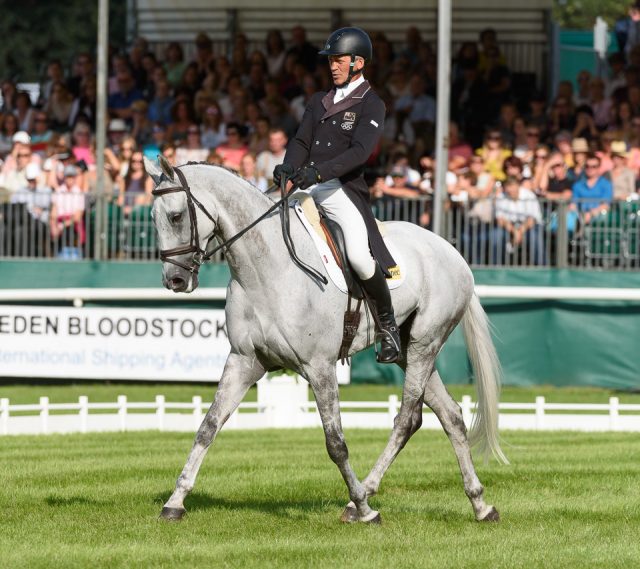 Another Kiwi looked to be in contention for a top placing, though the mark didn’t quite reflect the work he felt he’d produced. Andrew Nicholson‘s four-star debutante Swallow Springs earned a 32.1 from the judges, putting him in equal 16th.

“I was very pleased with him — I thought he was smart, classy, and active throughout, but I guess I’m out of favour with the ground jury,” he remarked. “He felt very cool in his brain. He’s come on mentally, and he’s a lot stronger in his body, but the scores didn’t match what I felt, and they didn’t match what I’ve seen in some other tests this week. But we’ll just have to get the other phases right.” 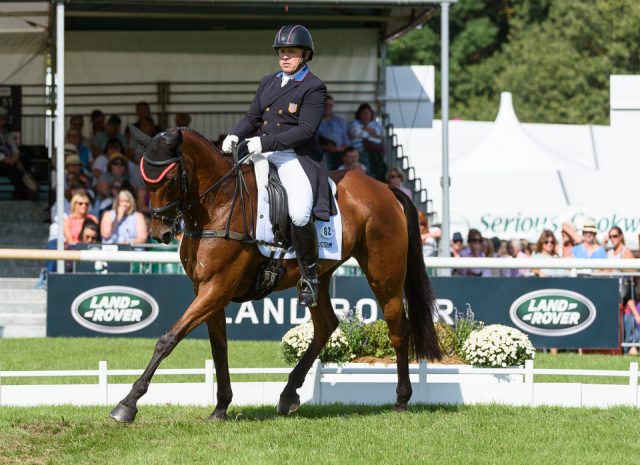 Buck Davidson and Park Trader choose the perfect moment to lay down a personal best. Photo by Nico Morgan Media.

Buck Davidson and Park Trader finished the day as our best-placed North American combination, finishing equal 16th on a personal best of 32.1.

“I was very happy with him, he worked really well,” he enthused. “He got a bit wound up when he first came up, but then he settled. I brought him to Millstreet [Nations Cup in Ireland] last week to school him, so he’s been over here for a couple of weeks now and is well settled. I’m excited to have him here this weekend — I think he’s the right horse for the job. His attention isn’t always there, but he’s an out-and-out galloper and jumper, and I’d like to do it better than I have before.”

Tomorrow’s cross country test is chock-full of tests and stamina-sapping efforts, and we’ve spoken to the riders about their initial impressions and battle-plans for tackling Captain Mark Phillips‘ tricky track. Stay tuned as we bring you the inside intel, and an unpacking of the course, before the competition recommences tomorrow at 11.00am BST/6.00am EST. Go Kiwis, and Go Eventing!

The top ten at the conclusion of dressage at Burghley.