A post shared by BootsandHooves_photography (@bootsandhoovesphotography) on Apr 11, 2019 at 1:42pm PDT

The second four-star of the British eventing season is upon us and, hot on the heels of Belton, it’s packed to the rafters with top talent. The Barefoot Retreats Burnham Market Horse Trials is one of our classic early-season pipe-openers, and each year, it jockeys for pole position with Belton. This year, it’s drawn the second slot, giving us the chance to keep a close eye on the form and preparation of some very, very interesting horses. Many of these are Badminton-bound (and, indeed, Kentucky-bound), while others still will be looking ahead to potential European Championship team selection later on this summer. Others still represent some of the most exciting up-and-comers in the country – and today, we saw one of those make a brilliant impression.

Burnham Market is situated on the north Norfolk coast, and arriving at the venue always feels a little bit like crossing the threshold into another world. Whichever direction you look in, there’s nothing but horses, jumps, and then sprawling vistas of farmland and open sky – it’s rather like an eventing snow globe, which is a concept we like very much indeed, frankly. After a brisk climb up the hill, it’s possible to see most of the cross-country action – and, if you’re lucky, you can see the sea, too. There’s a shanty in there somewhere, my friends.

Exciting landscapes aside, Burnham Market also offers a heaping helping of competitive opportunities for riders at all levels. After the big boss rejected my idea of ignoring the eventing in favour of in-depth reports on the Ferretworld Roadshow, I headed upwind to see what was going on between the boards. As it turns out, there was rather a lot.

There are two CCI4*-S sections on offer here, a CCI3*-S, two Advanced classes, four Intermediates, five Novies, and four BE100 sections, and an entry into any of them is so coveted that even today, waitlisted competitors were appearing, hopeful of a last-minute drop out. 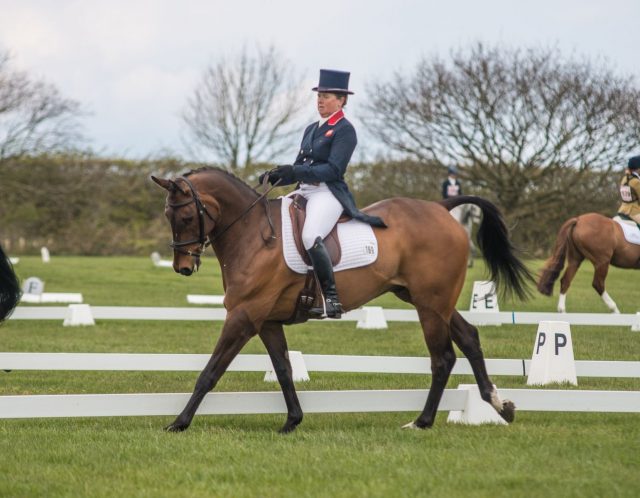 Pippa Funnell and MGH Grafton Street once again find themselves top of the pack. Photo by Tilly Berendt.

The two CCI4*-S sections got off to a seriously competitive start today, with some familiar faces throwing down the gauntlet early on. Pippa Funnell holds the overnight lead in section B riding MGH Grafton Street, after the pair delivered an incredible 22.7. This score equals the best-ever CCI4*-S dressage score at this venue – a record that Pippa set herself back in 2011, riding Billy Landretti. 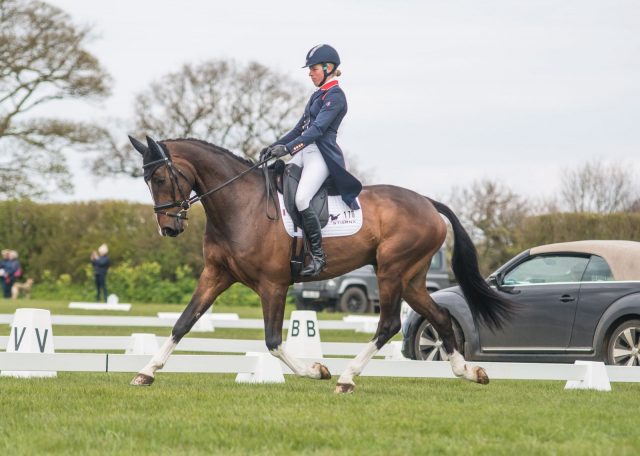 The flamboyant Monkeying Around is dressage-bred to the hilt – and it shows in his performances between the boards. Photo by Tilly Berendt.

Trailing behind by a couple of marks is Monkeying Around, the 2017 six-year-old world champion. He produced his first test at this level two weeks ago at Belton, leading after the first phase with rider Izzy Taylor – but we never got to see whether he’d hold that lead until the end, as he was one of a selection of horses to be withdrawn before the cross-country. Today, he sits in provisional second on 25.3, proving that his performance a fortnight ago was no fluke. 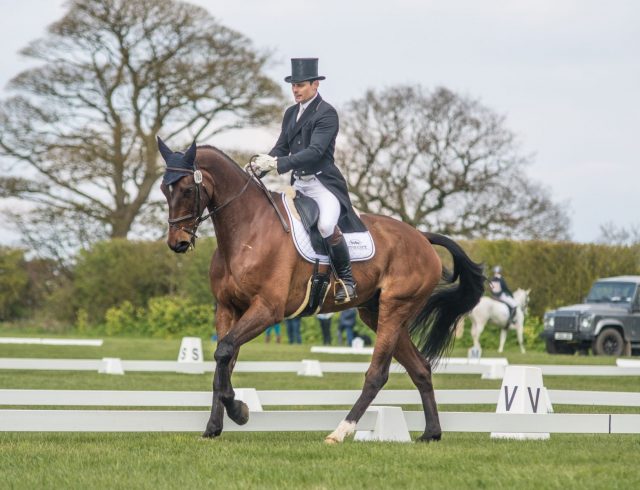 Badminton-bound crowd favourites Alex Bragg and Zagreb dazzled in the ring, showing off the horse’s powerful paces to score 26.2. They sit in third place overnight, closely followed by a CCI4*-S debutante who is, perhaps, one of the most exciting young horses in the country. Cooley Monsoon is proving to be a bit of a freak: ably piloted by Piggy French, he’s contested seven internationals, and he’s never finished outside the top ten. He’s got four international wins to his name among that number, and he’s never scored above a 30 in an FEI event. Four of those seven runs resulted in FODs, and he’s only added time penalties across the country twice – 4.4 in his first ever international at Chatsworth, where the time is tricky across the levels, and 3.2 in his first CCI3*-S. Today, he planted a 26.5 firmly upon the leaderboard, popping him into fourth overnight. Owned by comedian Jennifer Saunders, Cooley Monsoon is a horse we’ll be watching very closely this week – and we’ll be bringing you some insider info on him, too. 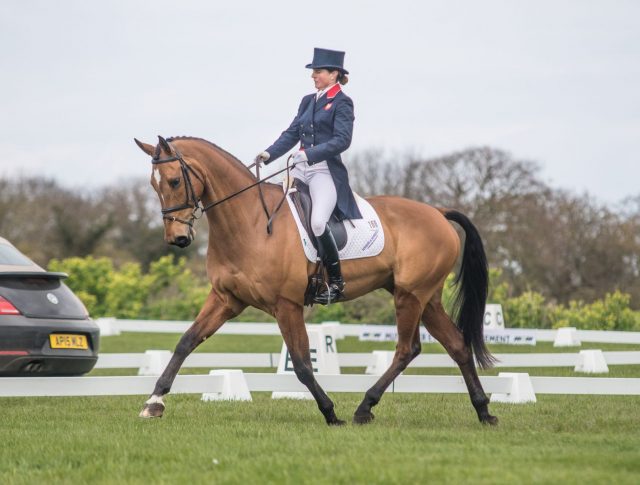 The remarkable Cooley Monsoon makes a step up with Piggy French. Photo by Tilly Berendt.

Rounding out the top five in section B is Tom McEwen and his Belton Grantham Cup-winning Figaro van het Broekxhof, who offered up an accurate, pleasant test for 27.4 and fifth. Though the big gelding doesn’t have the natural pizazz of a horse like Zagreb, he’s certainly proving that he can blossom through consistency. 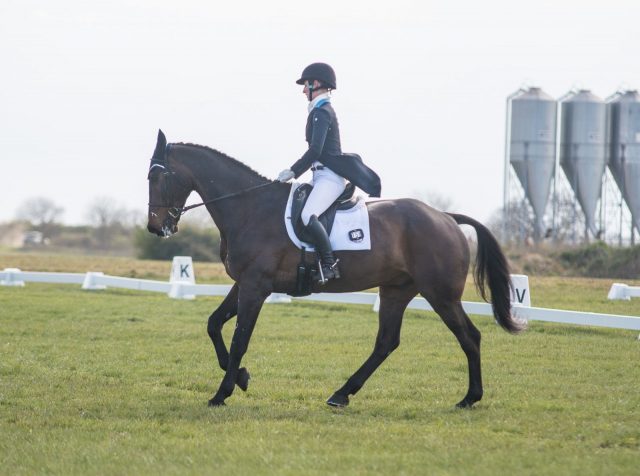 Jenny Caras, Fernhill Fortitude, and some silos, because Norfolk. Photo by Tilly Berendt.

We also saw Jenny Caras and Fernhill Fortitude come forward in section B, where they delivered a flowing test that was rewarded with much-improved marks in comparison with Belton. They’re currently sitting in 23rd place on 33.4.

We spoke at length about the young superstar-to-be that is Mollie Summerland when she finished third in the Grantham Cup two weeks ago, and today we saw her deliver the goods again. She and Charly van ter Heiden sit atop the CCI4*-S section C leaderboard after posting a 25.8 earlier today. Izzy Taylor sits second again, this time on Direct Cassino, whose 26.8 nudged him just ahead of third-placed Sam Ecroyd and Davinci III. 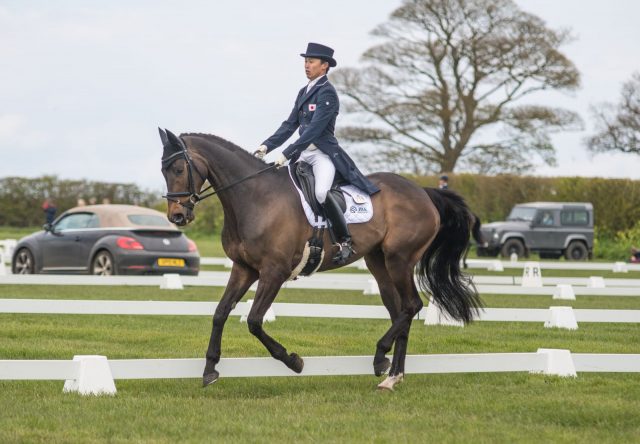 In fourth place is the Japanese supremo Kazuma Tomato, who brings forward Brookpark Vikenti. In 2017, we saw Kazu and Vikenti come achingly close to a win in Blenheim’s eight- and nine-year-old CCI4*-S – they ultimately slipped into second place by a tenth of a penalty and Kazu, who hopes to qualify all his top horses for Tokyo this year, will be hoping to give the horse the victory he so narrowly missed. Today, they scored a competitive 27.8, giving them a great start to the weekend. 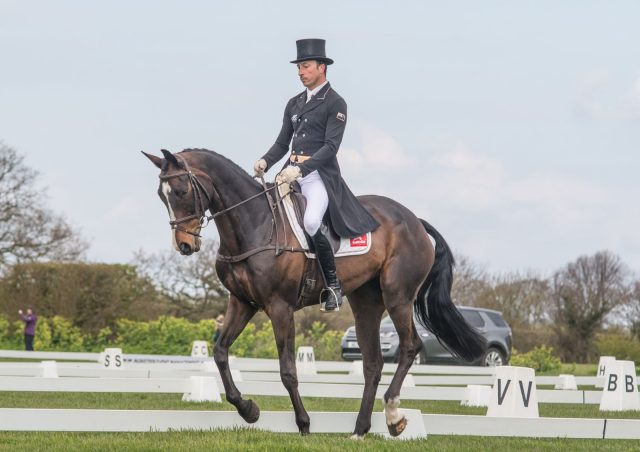 Behind him, Will Rawlin and VIP Vinnie share fifth place and a score of 28.9 with Kentucky-bound Tim Price and Xavier Faer. The latter, known at home as Hugo, can sometimes lose marks in this phase due to tension, but today he looked cool, calm, collected – and ready to conquer some bluegrass.

There’s plenty more to come tomorrow, including the arrival of the undisputed king of Burnham Market, Oliver Townend. This will be our first chance to see his horses in an international run – they were all withdrawn after the showjumping at Belton, in favour of using this happy hunting ground as a prep run. This is an event that, it’s fair to say, Oliver is rather adept at winning.

The King In The North. Can anyone get past Oliver this weekend? #EquiRatings #BurnhamMarket

We’ll be bringing you a full report of both days’ dressage action tomorrow, including insight from our leaders, a preview of what’s to come on cross-country, and – we can only hope – more profound reports on Zara Tindall’s outfit choices. From windy Norfolk, I bid you adieu. 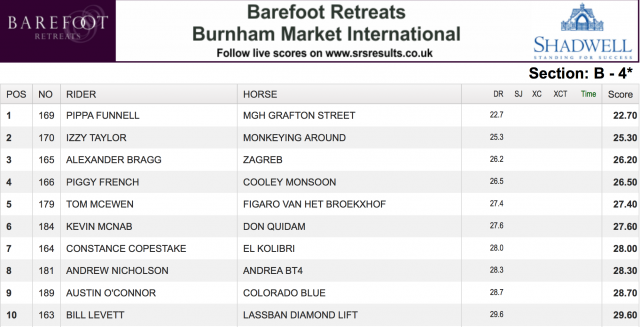 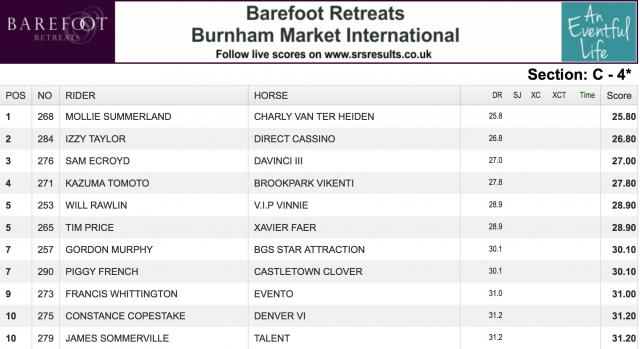