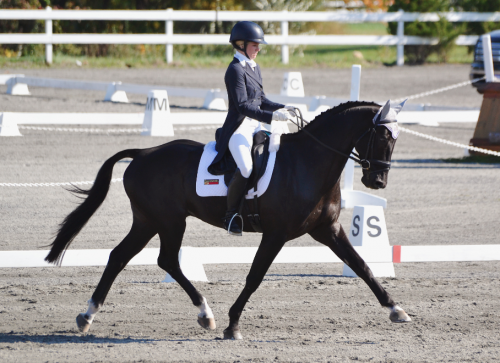 Caitlin Silliman and Remington XXV put in their usual solid test to move into the top 10 in the CCI3* at Fair Hill with their score of 48. Remi was a bit fussy in the canter work today, which I imagine affected their submission score, but overall this was a very good performance, and Caitlin and Remi became the ninth pair we’ve seen today to score in the 40s. I had a good chat this afternoon with Denis Glaccum and Will Faudree, who agreed we need to look at our scores here in American through an international lens, especially when talking about how we can raise the bar to one day be on an equal playing field with Europe. It’s encouraging to see nearly 10 scores in the 40s — with four of them 45 or less — and it’s definitely an indicator that we’re on the right track to improving the quality of our dressage here in the States. 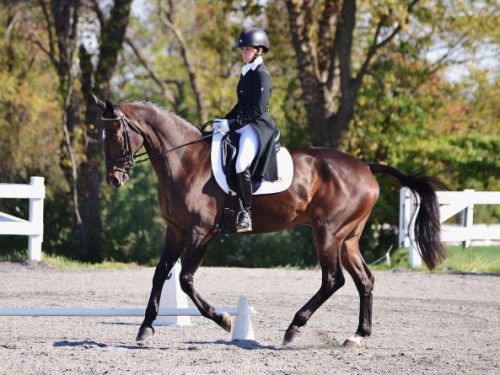 Sally Cousins and Tsunami performed what has to be one of the best tests I’ve ever seen from them to score 50.8, which ties them for 10th with Susan Beebee and Wolf. Sue tends to be very tense in the dressage, but she relaxed nicely today and had some good moments in the test. These two shine on the cross country, so they’ve placed themselves in a very good position to move up the leader board tomorrow, as they sit just outside the top 10. Look for Sally and Sue to have a cracking double clear round tomorrow. We also saw a nice test this afternoon from Ellen Doughty and Sir Oberon, another of the West Coast pairs who received a Land Rover Competition Grant to compete here at Fair Hill this weekend. Ellen has worked so hard to produce Obie, and her dedication is really starting to pay off; they scored 53.6, which I believe should put them into 18th place. 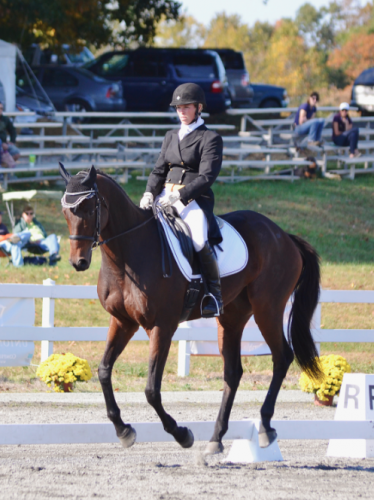 Erin Sylvester and No Boundaries are sitting close behind them on a score of 54.8. Unfortunately, Bucky swapped leads coming down the center line to the salute; that’s the third U.S. horse I’ve seen pull that stunt in a major competition in the last week, so that has to point to a conspiracy. Bucky is another horse who struggles to hold it together in the dressage, but he handled the atmosphere well today. We’re now heading into the fifth and final group of riders in the CCI3*. Jennie Brannigan and Cambalda still hold the lead on a score of 42.6, with Doug Payne and Crown Talisman in second on a 43.6, and Katy Groesbeck and Oz the Tin Man in third place on 44. I’d like to take this time to thank Mother Nature for sending us such beautiful weather so far for the weekend. After wondering if I would ever be warm again last week in Boekelo, this is a very welcome change. Go Fair Hill. 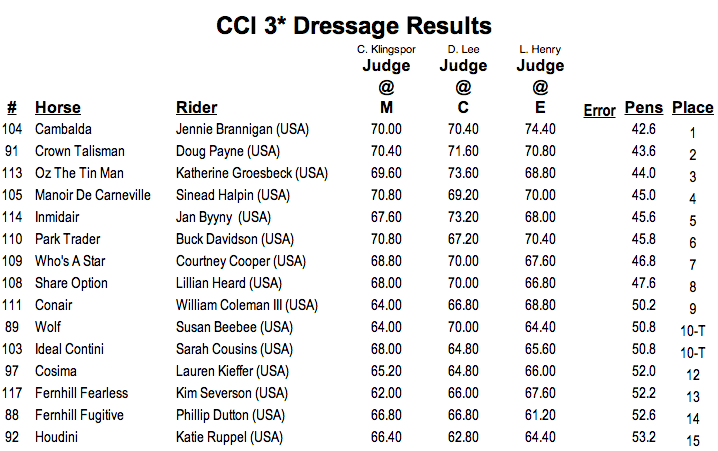