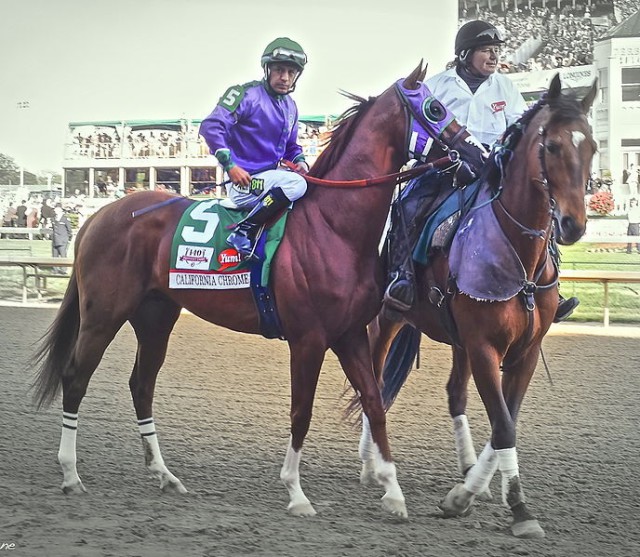 California Chrome at the Derby. Photo via Wikipedia Commons.

California Chrome as a sport horse? Ok, so we know it would never happen — he is a phenomenally successful race horse and will never know anything other than an oval, and later a breeding shed.  And not that he should, either; he clearly loves his job and has wonderful owners, a trainer and connections who care for him greatly.  It’s a Hollywood story unfolding in real life, and I hope the final chapter is a good one.

But still, we’re eventers.  And as eventers, we look at every Thoroughbred with a critical eye: will he jump?  Would I like to ride him?  So let’s take a look at California Chrome through that lens, and see where it goes.

Let’s go in with a blind eye and pretend we don’t know how flashy and pretty he is.  Let’s start with the paperwork: his pedigree and race record.

California Chrome is by Lucky Pulpit (Pulpit – Lucky Soph) and out of Love The Chase (Not For Love – Chase It Down).  The first thing I do when evaluating a prospect’s pedigree is find whatever photos I can of the parents, grandparents, and adult siblings/relatives, to tell me how this prospect might turn out.

Lucky Pulpit very much resembles his sire, Pulpit– a little chunky, big hip, with the typical arched Pulpit neck.  Lucky Pulpit raced at a mile or less; not what I typically like for an eventer (or a Derby horse!), but let’s dig further. I consider Pulpit a good name in a sport pedigree; he’s a very successful son of the great A.P. Indy (to whom I am very much attracted).  A.P. Indy is a noted distance influence, and his traits commonly “carry” down generations in a pedigree.  I like the athleticism, balance, and intelligence that comes from the A.P Indy/Pulpit influence: smart horses who use themselves well. Lucky Pulpit also brings in a branch of Caro through Cozzene; Caro is noted for good jumpers.

On the dam side, Love The Chase is by a fantastic sport sire Not For Love.  Not For Love stands in Maryland and has quite a few sport offspring out there; he himself is very good looking with a beautiful front end and strong hind leg.  I’ve seen several Not For Loves and they are lovely individuals: nice movers, great balance, very classy.  Love The Chase also brings in two lines of Northern Dancer (jump!), and doubled up Numbered Account (by Buckpasser).  All good things.

So the pedigree is definitely interesting and inspiring for a potential event horse career, at least in my opinion.  Let’s take a look at his race record.

California Chrome has won at distances from 5.5f to a mile and a quarter.  It’s common to start two-year-olds in short sprint races, so the 4.5-5.5 furlong distances don’t mean much.  Instead, notice how he can win over a distance of ground (multiple wins a mile and an eighth or more), and over both dirt and synthetic.  They say a good horse can run on anything, and that seems to be true here.  Dirt vs synthetic is not much of a distinction in a sport prospect; it’s just interesting to note this horse’s athleticism.

He has 12 starts so far, which is a pretty good load for a spring three-year-old.  He hasn’t been run into the ground, though; with the allowable exception of the Preakness, he gets about a month’s break between races.  This shows consistency and soundness, being fit mentally and physically to withstand steady training.  And winning in graded stakes company?  That’s an elite athlete: a Michael Jordan or Peyton Manning who can excel at nearly any sport they try.

Why do I consider racing success useful for non-racing sport? I once met a noted professional who studies Thoroughbred biomechanics and has charted thousands of race horses’ performances along with their structural characteristics; he truly has it down to a science in measuring what it takes to be a graded stakes horse.  The interesting thing?  He once studied Bruce Davidson’s advanced level event horses… and they measured up right alongside the graded stakes performers.  It was an interesting conversation and made me appreciate what “freaks” our great equine athletes really are.

Back to California Chrome.  I like his pedigree, I love his race record. This alone probably means he’s out of my price range (you could say that, LOL)… but let’s continue and take a look at him conformationally.  It’s tough to find any kind of conformation photo of him; here’s one under tack, another getting off the van, and the best I could do, a screenshot at bath time from a video by the Thoroughbred Daily News. 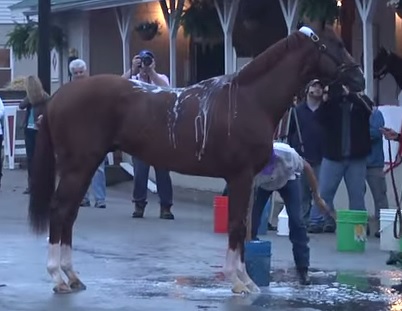 [Via Video by Thoroughbred Daily News]

California Chrome shows a nice overall balance with proportionate parts that blend well together.  His neck comes nicely up out of his shoulder, which has good length if just a bit upright.  The front end suggests good reach and length of stride through the shoulder.  His feet, while criticized for being white and “weak,” show good shape and size…white feet don’t scare me, either.

His topline is smooth and strong, showing a nice length of back, and good loin connection.  His hind end looks powerful with good angles in his hip and hocks to drive well under his body.  He has a strong chest and deep heartgirth with plenty of room for lung capacity.  California Chrome has enough substance to suggest durability and stamina, but he doesn’t look blocky or chunky whatsoever.  His strong hip combined with the uphill feel of his carriage makes me think he’d have no problems rocking back and pushing over a big fence.  Add that athleticism along with his big intelligent eye and flashy good looks…well, it’s no wonder most of America has jumped on the bandwagon!

The final piece we have to evaluate is his movement.  Watching his race videos and workouts, he doesn’t appear to be a dressage winner.  While his gallop is remarkably efficient, smooth and powerful, his trot and canter appear a bit stilted.  Some of this is due to being at the track; many OTTBs will show vast improvement in their trot with proper training as their muscles change, but there are limits to how much better it will get.  From what I’ve seen, California Chrome lacks some suspension and ground cover in his slower gaits, but he more than makes up for it with his gallop!  In both canter and gallop, he uses his hind end well underneath his body and moves relatively uphill, not heavy nor on his forehand.  He shows nice reach through his shoulder and fairly correct flight, with little wasted motion paddling or winging. Even when he “levels out” at racing speed,Chrome keeps good rhythm and balance with an effortless stride.

Could California Chrome make a nice eventing prospect?   I’d expect him to be a good jumper who would really eat up a cross-country course. While we’ll never know for sure, I certainly wouldn’t turn him down. Best of luck to California Chrome and all his connections as they chase history in the Belmont.  We’ll all be rooting for him!