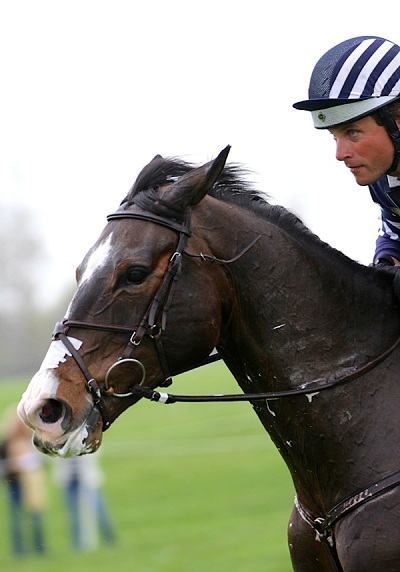 Trading Aces is one of many eventers who wears a FLAIR nasal strip. Photo by Kasey Mueller.

California Chrome is one of many racehorses that now wear FLAIR Nasal Strips when they run.  As eventers, we’re pretty familiar with the product– I remember receiving the first black ones in my show packet some ten years ago.  Since they can help open nasal passages, perhaps allowing for better oxygen intake, it makes sense that racing trainers would jump on board with any possible advantage to improve their horses’ performance.  Most tracks allow it and consider it an optional piece of equipment like blinkers or front bandages.

Two years ago, I’ll Have Another won the Derby and the Preakness in his FLAIR nasal strip, but speculation ensued when Belmont Park announced the strip was prohibited.  New York racing does not recognize FLAIR nasal strips as most other states do.  I’ll Have Another was scratched and retired just days before the Belmont Stakes due to injury, so he never faced the reality of running without it.  But California Chrome now sits in the same position: no FLAIR strip for the Belmont.

USA Today has an article on this very subject, and points out that harness horses are allowed to wear the strips, but Thoroughbreds are not.  Also, this decision seems to be up to the New York racing stewards, not a New York State Racing and Wagering Board rule.  Perhaps there is a little wiggle room to permit the FLAIR strips, if the stewards’ minds can be swayed?

California Chrome’s trainer Art Sherman admits that using the FLAIR nasal strip was owner Perry Martin’s idea.  And since the horse has won six times wearing it, why change?  Chrome’s owners could put some pressure on New York officials by taking their horse elsewhere should their “normal” equipment not be allowed — but really, would you take your horse away from a possible Triple Crown win just to make a point?  Still, the general public will not see the harm in the nasal strips, which are fundamentally a springy piece of adhesive tape, especially in a racing state where multiple medications are allowed on race day.  What’s the harm, and where’s the unfair competitive advantage?

If California Chrome is good enough to win the Belmont, he’s probably good enough to do it without a FLAIR nasal strip.  But the “people’s horse” will have so much support it’s hard to see how New York stewards will turn him down.  With or without his nasal strip, I hope we see a big white nose crossing the finish line first on Belmont Stakes day.