Editor’s note: We announced the 13 finalists in the 6th annual EN Blogger Contest last week, and now we’re bringing you their first round entries here on Bloggers Row. Each entry, along with their bios, will be presented unedited for fairness’ sake. Thanks as always for reading EN. Please leave feedback in the comments section. 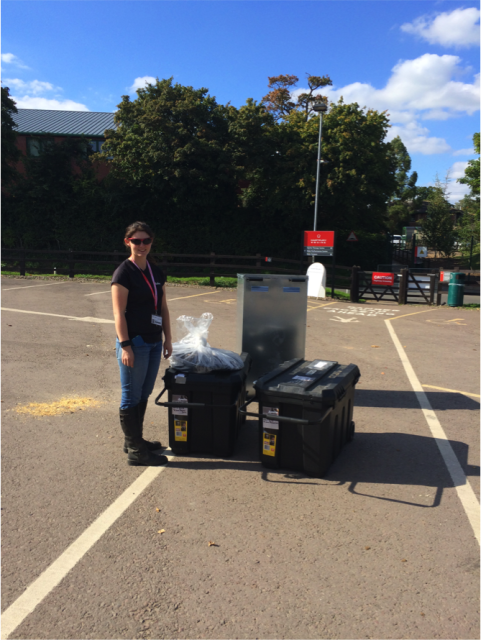 Round 1 Entry: California Dreaming to Living the Dream (in the Cold, Wet Albeit Green and Pleasant Land of England)

I have recently transplanted myself and two of my horses, Annabelle and Fintan 5.5 thousand miles, an ocean, and a continent from all that I have known, to further my quest and passion to be the very best that we can be in this crazy sport of eventing. I have gone to the epicenter of eventing in the UK, and to study Equine Science at the world renowned, Hartpury College.

My first event in the UK was Withington Manor and it just happened to be the same weekend as Rolex this year, so lots of excitement on both sides of the “pond” Atlantic Ocean. Due to tons of flooding and heavy rainfall in the UK, a lot of events in the early spring were cancelled so this was the first outing for many British riders too. Who knew England had so much water!

The day started with me having to drive through very dense fog, bringing back memories of home and the fog we would sometimes get in the early mornings at John Marshall’s Fresno County Horse Park. To add to the stress I was driving on the wrong side of the road and the steering wheel was on the wrong side of the car, thank goodness my parents insisted on getting me an automatic!

Oh and did I mention, I was driving and navigating solo at some ungodly time in the morning with only a cup of English tea to help me focus and keep on the tiniest of country lanes to get to the rather remote property where the event was being held. Eventually, after what seemed like a lifetime I finally arrived and was reunited with my horses that had also safely arrived on the lorry aka trailer, thankfully driven by someone other than myself.

It was then go, go, go! This was going to be a day of many firsts for me. First of all we had to complete all 3 phases in one day not over 3 days, as I was use to in California. Then before I could do anything, I had to check in and have my helmet checked and tagged to make sure it was to the right safety standard, a new rule that had just come into force in the UK, really wished my helmet did not smell so badly, oh well. Dressage and stadium went to plan albeit with a rather quick wardrobe change for both Annabelle and myself in between. Dressage was good with Annabelle staying calm and a nice double clear in stadium meant we were then on to the exciting bit, my first x-country in the UK!

Nervously, I kept reciting the course to myself, no tracks to follow unlike in California, so plenty of potential to go astray. I only had time to walk the course once, then there was the change in the color of the fence numbers, we were competing at the Novice level which is Preliminary in the USA but fences were not numbered in green but yellow, flash back to my beginner novice days in the USA, but trust me these were no beginner novice fences, everything looked huge. I kept telling myself to focus and then another first, warming up on my own, never did that in California always had somebody on the ground, but I knew what we needed to do.

Before I knew it we were being called to go to the start box…kept telling myself to breath, then of course it happened, Annabelle reverted to her hyper excited pre-x-country state which means she is just soooo excited about what is to come that she basically looses it, digging her heels in and simply refusing to go forwards. Meanwhile, the officials are still calling me, I felt myself turning as red as my x-country vest and having a flash back to another time back in the USA, when I competed in my very first CCI *.

At that event I had planned with my trainer James Alliston 4* cross-country master that I would need a lead into the start box, as Annabelle had been getting progressively worse at calmly going there by herself. So what did James do as it came time for us to go to the start box? He completely forgot about our plan and casually walked over to the start box alone, all the while Annbelle and I were spinning further and further away from where I needed to be. Then superwoman Helen Bouscaren (James’s partner) saw the situation and was able to get ahold of Annabelle and escort us to the start box with seconds to spare.

So back to my first event in the UK, Annabelle refusing to go forwards, just as I was about to yell for help from some unsuspecting bystander, my trainer in the UK Nick Gauntlet (yes the 4* star who produce the incredible Chilli Morning, how lucky am I) who was on another horse came to my rescue to give Annabelle and I a mounted lead to the start box, our clock had already started so that was a another first.

Once Annabelle and I got on cross-country the chaos of getting to the start box was quickly forgotten and it was quite simply amazing! Running up and down the steep English hills, through heavy woodland, and over stonewalls was truly amazing. We finished clear with a few time but I was so proud of how we had completed our first event in the UK. I was thrilled and exhausted all at the same time a truly memorable first; it gave me a taste for what is to come, eventing in the UK and Europe!

I can tell you that it has definitely wet my appetite! I know that there are so many more adventures, experiences and firsts still to come as I settle into my new life in the UK and I am so thankful that we made the long journey to the UK.