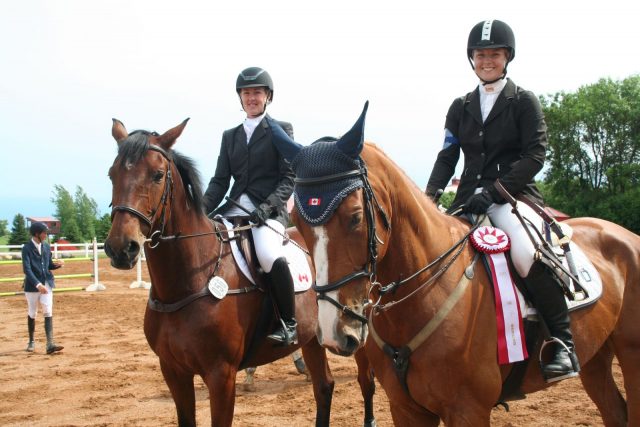 Canadian riders, Paige Dueck and her horse Zoom on the left, and Krista Brown and Chanel IV pose with their awards following the victory lap at Roebke’s Run. Photo by Pat Schmidt.

Manitoba is a large prairie province at the longitudinal center of Canada. It’s well known for its farm country and fantastic fishing. For others, the choice of sport is eventing.

Such is the case for Paige Dueck, who operate a 48-head Brown Swiss dairy farm near Kleefeld with her husband, and for Krista Brown who lives in Oak Bank. Both riders loaded up their horses for an approximate 16-hour round trip to compete in the June Roebke’s Run Horse Trials in Hector, Minnesota.

This is not the first time the Canadian flag has flown proudly over the judge’s box at the stadium jumping arena. Roebke’s Run is high on the list of other Canadian riders, not only for its proximity across the border, but also because many return to enjoy what Roebke’s Run has to offer. 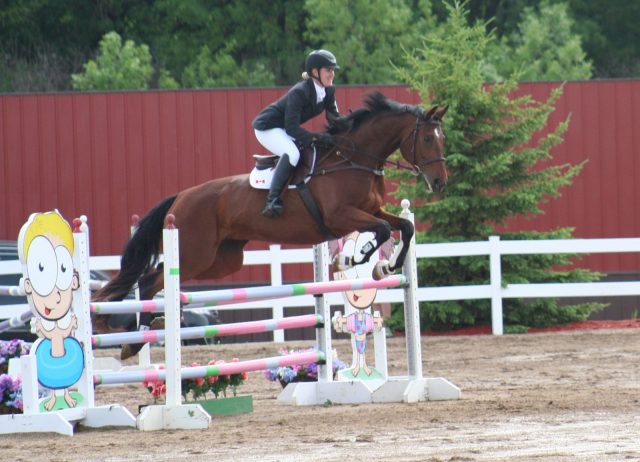 As a teenager, Paige Dueck became a working student for Margo Galion in Alberta at Rhiannon Farms, where she received her introduction to eventing and got her first taste of competing.

“I’ve been competing for seven years, I’m on my second horse in life and have been to Roebke’s Run six times. My first coach, Lesa Cafferty, also from Canada, brought me here with my first horse, Chase, an off-track Thoroughbred that I evented with for four years,” Paige said.

“Zoom was actually bred in my province. I do have aspirations to move up to Prelim. But because I run a dairy farm full-time I have to be strategic in the time I dedicate to getting my horse capable of showing, I actually take the winter off. I do not have an arena nor do I board my horse; she’s at home on my farm.”

While other riders have the luxury of being able to compete year-round, Dueck says that towards spring the shoes go on and she starts doing fitness work. She then attends local schooling shows to get Zoom jumping again, then goes on to cross country schooling, local derbies and then dives into the eventing season.

There is only one sanctioned horse trial in her province and she attends about four horse trials a year. Jokingly she said she is probably best at milking cows.

“I would really like to bring Zoom up to Prelim. There just aren’t enough events close to me to get enough qualifiers to move up and allow me keep working at the same time,” Paige said. “If I could come and win first place at every Prelim I come to, I would say that’s achieving a goal.” 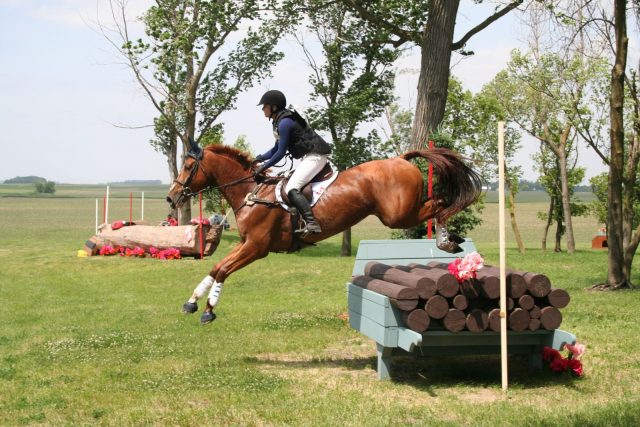 Krista Brown has been competing for 14 years and last year found herself on the Eventing NOBoundaries list, which is designed to identify high performance eventing talent for Canada. During the 2016 season, the program focused on on identifying future talent and combinations with the potential to represent Canada at future championships.

“My future goal is to make the Canadian eventing team and compete at the Olympics and the World Equestrian Games,” Krista said. “I was very excited to be put on the NOBoundaries list last year.”

She says moving up to one-star or Intermediate is challenging, but reflecting back she noted that going from Training to Preliminary was a bigger jump for her.

“I’m here trying to qualify for a one-star or move on to Intermediate. Chanel does pretty well traveling. This is my first time here. It’s a beautiful place with a tough, very technical cross country course. That’s good; it teaches me new stuff. I have my coach, Tecla Dophide, here from Manitoba as well,” Krista said.

Both Brown and Dueck really appreciate being able to come to Roebke’s Run.

I love the decorations; I love the layout,” Paige said. “This is always a challenging course as far as technicality; I love that. All three dressage rings are groomed immaculately, The stadium jumps have bold color, and it’s a beautiful place to watch from. It’s all A-plus stellar. Their hospitality is amazing. They took my grandmother, Norma, on a four-wheeler so she could watch me, and my husband was allowed to take her on a four-wheeler to show her the course.”

Krista added: “It is a beautiful, beautiful course. I can definitely say it was tough; there were a few questions out there that I was hoping would ride well, and they did.”