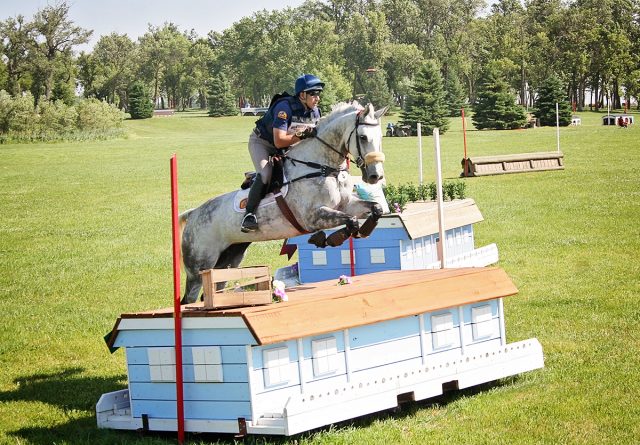 Ecuador, a republic in northwestern South America, is miles away from Roebke’s Run in Hector, Minnesota, but Daniel Sarango competed at Roebke’s Run this past weekend to qualify for the 2017 Bolivarian Games in Santa Marta, Columbia, and looking ahead to the 2019 Pan American Games in Lima, Peru.

With the results of finishing second in the CCI* with Katarina Van De Heffinck, Daniel received his qualifier to compete at the Boliavarian Games for his native Ecuador, all the while keeping his eye on his major goal to represent his country on the Olympic stage.

“My goal when I moved to the United States was to compete in the Olympics,” Daniel said. “I hope to have Katarina at the 2-Star or Advanced level by 2018 and in 2019 I hope to qualify for the Pan Ams. I competed here this weekend at one-star, but I have ridden two-star.”

Daniel made the 18-hour drive from his base in Dalton, Georgia to compete Katarina, a 7-year-old Belgium Warmblood mare owned by Centaur Equestrian, in her first CCI*.

Daniel, 32, started riding at the age of 5 and has been competing since he was 14-years-old. He initially competed in show jumping and began eventing in 2010. He is a former member of the Remount Unit of the National Police of Ecuador and competed as a member of the National Equestrian Team of the Police of Ecuador at national and international levels.

“Carlos Nuñez got me started in eventing and coached me in 2010 and 2011,” Daniel said. “I always liked dressage. It gives you a very good connection and feeling with your horse. It’s very important; if you are not feeling your horse you have nothing. Dressage is the best choice when you start riding. When you go to school you start basic learning, like ABC’s and numbers. Dressage is the same.”

While he has competed all along the East Coast, Daniel said he has a special fondness for Roebke’s Run. “In 2015 I competed in the two-star with my friend and former Olympian, Ronald Zabala,” Daniel said. “This is a good course; if you need to go faster it is not easy. I like the facility and am grateful to the people working very hard. The people from Minnesota are always friendly. I hope to come back here again next year and more times in the future.”