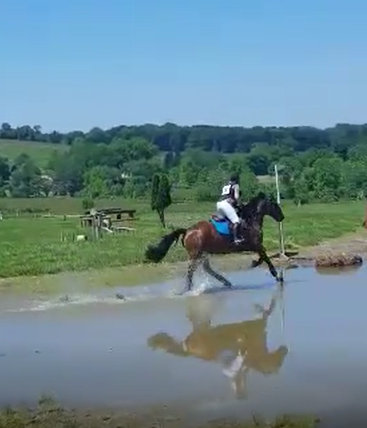 It’s been a couple of weeks since I updated our progress back to eventing, and there are lots of picky little details that really can be skipped over. I suppose if you were competing at a CCI**, you wouldn’t skip the picky little details, but if you are chicken, old, and marginally fit I don’t think it matters too much. It’s enough to get both legs on the correct sides of the horse and maintain proper vertical order (ground, horse, rider) most of the time. Add memorizing a dressage test, remembering a jumping course, and both walking and performing over a cross country course — all on the same day — and you have the Old Fossil Olympics going on.

So of course you are thinking, this is where she explains how and why she went off course at her latest horse trial! Ah ha! But I didn’t!

Instead this time the footing was much improved for dressage, and we got a great score despite a little mistake with the first canter depart. Unfortunately, the ring was a bit behind time, and because I have a long drive to the event site, I plan on walking the cross-country course in the two hour space between dressage and jumping phases. When the ring gets 15 minutes behind suddenly you have only 1 hour 45 minutes. When you are basically grooming for yourself, the minutes are not retrievable!

So I hacked back to the trailer, quickly stripped him, sponged his back, threw him back in his trailer to vacuum hay and ran up to the cross country course. Except … you don’t run up that legendary hill at Plantation. You walk. Slowly. Even more slowly. Finally, gasping, you stop, just a minute, and pretend you’re getting a drink of water from your bottle. Really, you’re gasping for air because you are not in shape. I don’t think anyone is in shape for that hill. It’s like the Fossil Olympic hill. You expect a cheap neck medal and finish line when you get to the top, instead, someone in jeep zooms past you spewing red dust.

So once you get to the top you go to the cross country course. The footing is extra special grass that has been mowed thankfully since last time, so it’s not so long. (When it’s really long you lose children, dogs, and jump judges in it. They find them with GPS and heat seeking technology.)

The novice course walks decently, with a couple of hairpin turns which seemed interesting, the big jumps were set in really good galloping footing, and we had TWO waters to negotiate. Two. That’s really an embarrassment of riches there! But ah ha. You thought I was going to get lost. No, I did miss Number 17 on the walk, but I found it on the map, and I remembered it when riding the course — amazingly. I was not going to …. what was that? What wasn’t I going to do? I don’t know, I can’t remember.

So I survived the Hill, the course walk, and the heat and was ready to jump. Having had a particularly good jump school with a young local professional last Sunday, I was feeling pretty ready for stadium again. However, I did make a mistake — in setting up so nicely for a rather airy vertical on the turn, I landed and didn’t go forward enough to an oxer on a turn, and buried him. He got the rail on the way up. Darn. But the rest was really good. 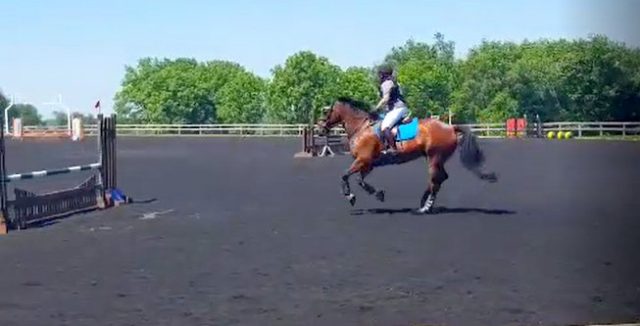 Photo from video by Laura K. Rayne. Looks good here but a jump later the blue is lost…

So down to cross country I went, upped the stirrups a hole, and thought — geez, the footing is so good, I’m glad I didn’t waste time putting in studs today. Of course, I canter down to the start box and he slips a little as we go in a circle to start. Yikes! Fortunately, that was the only slipping I felt the whole time, he was very good to all the early jumps, we had a few chip-ins but very forward and felt good.

We were a bit tired by the second water. I asked him to go big on the second last, a brushy top table that is rather large, and he responded with a nice, knees-up leap, but over-reached a tad on landing and pulled off his shoe. I watched it spinning merrily, shoulder high, to my left, and noted where it landed. I got to the last fence, reported I was clean to the finish people, and then told them I had to go back for the shoe. Fortunately my friend found it almost immediately and brought it back to the trailer for me.

So my Lost Shoe Luck was practically used up for the year, I bet, on that find. I don’t know anyone that ever finds lost shoes at Plantation, they disappear into the turf and are gone forever, so we count that one pretty special.

By now, it’s getting very warm. The nice breeze up on the hill is keeping it fairly good even with the cross-country vest on, but now that we are back at the trailer, I pull it off quickly and get to work washing off Hamish to cool him out. He knows now he finally gets to eat grass and I can let him stand and chow down while I pull off tack, undo boots, wash and scrape.

The trailer looks like a tornado went through and deposited the tack room contents outside. I don’t care. I used to care, but now that I am a Fossil, details like this make me say, “Wow, I actually got all that tack off him before I fainted!” Instead of,”gee what a mess.”

We remember to hydrate. By that, we mean drink water. Lots of water. We snack a bit with friends, feed the kids, cool out the horses, check the scores. Pick up the dressage tests and study them quickly and put them on the truck dash for more closer scrutiny on the long ride home. We check the scores. We hydrate. We put away all the stuff that fell out of the tack room and horse trailer. I changed out of the swamp butt full seat breeches to something drier. We check the scores yet again. Finally we are searching for the last bottle of water, and the scores are up — we finished third, but that rail was costly yet again, and would have had another primary color had I not been mentally congratulating myself.

Surviving yet another event, it seems like we had stepped up another rung on the goal ladder. I was mentally going over all the courses and jumps, when I heard that a horse had been lost at another event. How sad. I immediately thought of my bay friend, and went right out to his stall and hugged him and told him I loved him. He was appreciative but really was more interested in dinner. Sigh.

Next? I think we are taking a heat hiatus due to summer being difficult for Fossils to function correctly, but our outings will continue until we are able to enter a recognized event later on the calendar. The goal hasn’t quite been achieved yet, but I am grinding along and things look pretty good from here. Forward.