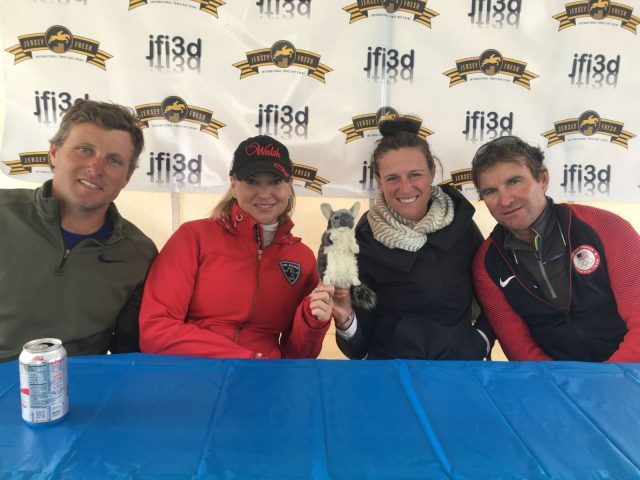 Friday’s press conference at the Jersey Fresh International Three-Day Event set the stage for a reunion of our 2015 Pan American Games gold medal winning team. It gave Chinch flashbacks of one of his favorite weekends — he loved every second of it!

What did these teammates have to say today? Read on to find out:

Marilyn Little on “Kitty’s” fitness: “When I went to The Fork I didn’t start out very quick. I wasn’t sure coming from Wellington how her fitness would be, and I was pleasantly surprised. I image she was (fitness-wise) where most horses are in the beginning of February looking toward Rolex. Since then we’ve been turning up the volume and adding hills and terrain that we didn’t have access to in Wellington. Looking at the course, I will be glad she’s getting fitter!”

Marilyn Little on tomorrow’s cross country course: “There’s a lot of jumps. From a fitness standpoint, it’s great. It’s not just terrain. I think it’s beautifully presented. There’s a nice flow in the beginning. It really gets them going. So, I really like the first bit, and then after there’s some real accuracy questions which keeps you on your toes toward the end.”

Phillip Dutton on taking Z and Warren to Tattersalls: “Both Z and Warren are pretty close to doing a four-star, so I thought it would be a good stepping stone to go overseas and jump a course we haven’t done before. I haven’t been there before, but I hear it’s a pretty strong three-star”

Phillip Dutton on tomorrow’s cross country course: “It’s a bit more horse friendly. It’s not overly strong or hard, but as Marilyn said there’s more terrain here than you think. There’s a lot of jumps, so you’ll be proud of your horses when you finish.”

Lauren Kieffer on D.A. Duras: “Last year we spent getting to know each other and getting him broke to the way I want him to go, so he’s really getting pretty confirmed. Hopefully he will just keep getting stronger and stronger and I’ll be able to start pushing on him more.”

Lauren Kieffer on D.A. Duras’ barn name: “Tony (Rosati – Debbie Adam’s husband) doesn’t like that I call him Baby Huey. We’re supposed to call him Terminator now, but I don’t know if that nickname will die.”

Boyd on his new ride Long Island T: “He’s a new horse for me. This is our first attempt at this level, so yeah I’m pretty nervous about it just because it’s taken a bit to get a partnership going with him, but he’s had really good runs the last couple of starts, so I think we’re in good shape. He could potentially be a really good horse for me because is so flamboyant in the dressage, which is sort of what we picked him for – trying to find a horse that can manage to get big scores in the dressage. I will find out a lot tomorrow.”

Sara Kozumplik Murphy on being tied with Will Coleman: “I think we both had the same score because in the warm up we were not even looking at each other and we were doing the exact same thing. It was like a pas de deux.”