We are moving right along into the full-fledged fall season in the U.S., and next on the docket is the popular Stable View Oktoberfest CCI4*-S, happening now in Aiken, SC. This event is an annual destination for horses and riders prepping for fall move-ups or three-days such as the Maryland 5 Star and USEF 3*-L National Championship. 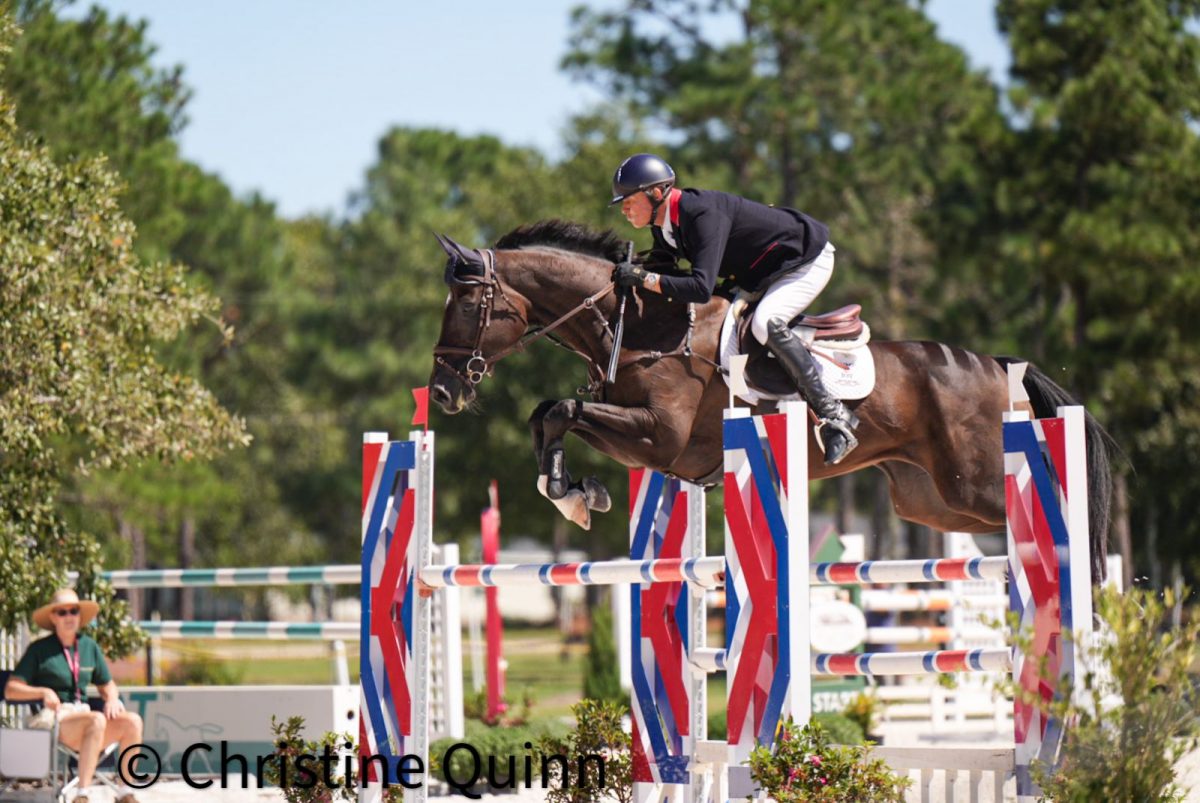 The 4*-S this weekend has completed dressage and cross country and will take on Capt. Mark Phillips’ cross country track tomorrow. Great Britain’s Leslie Law and Jackie and Steve Brown’s Lady Chatterley are the pair in charge of the division after two phases, adding no show jumping penalties to their leading dressage score of 26.6. 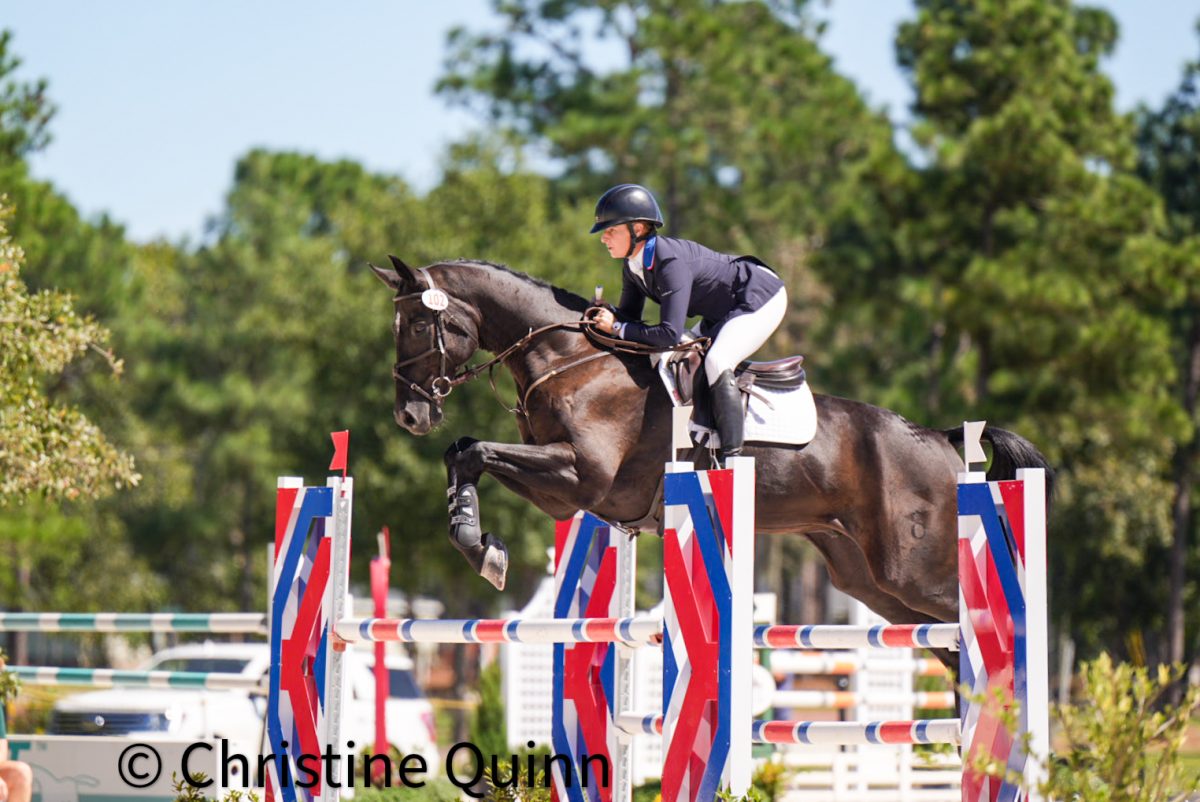 Sydney Elliott and QC Diamantaire are second in the 4*-S. Photo by Christine Quinn. 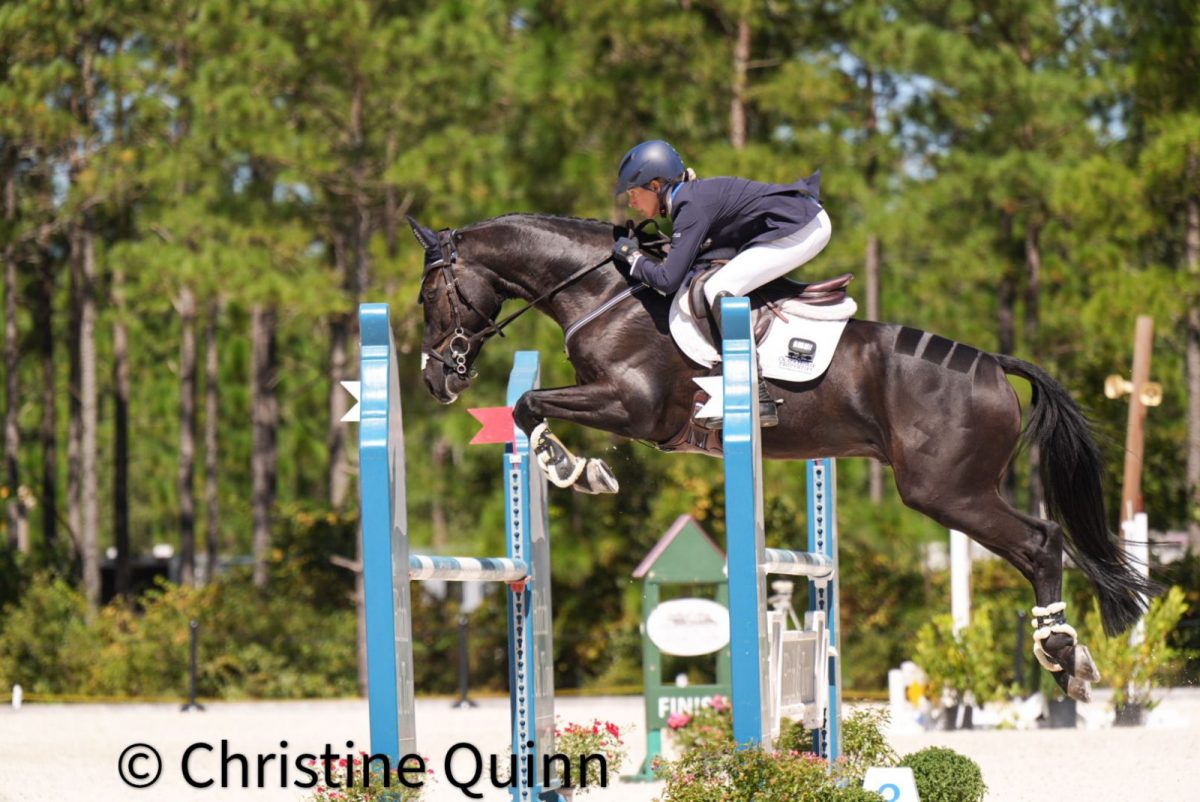 Liz Halliday-Sharp adds one rail to her dressage score for third overall in the 4*-S. Photo by Christine Quinn.

They’ve not got much room to spare, however, as Sydney Elliott and Carol Stephens’ QC Diamantaire are currently in second on a 28.0, followed by Liz Halliday-Sharp and The Nutcracker Syndicate’s Cooley Nutcracker in third on 31.9. Reigning USEF National 5* Champions Doug Payne and Quantum Leap are in fourth on a 32.0. 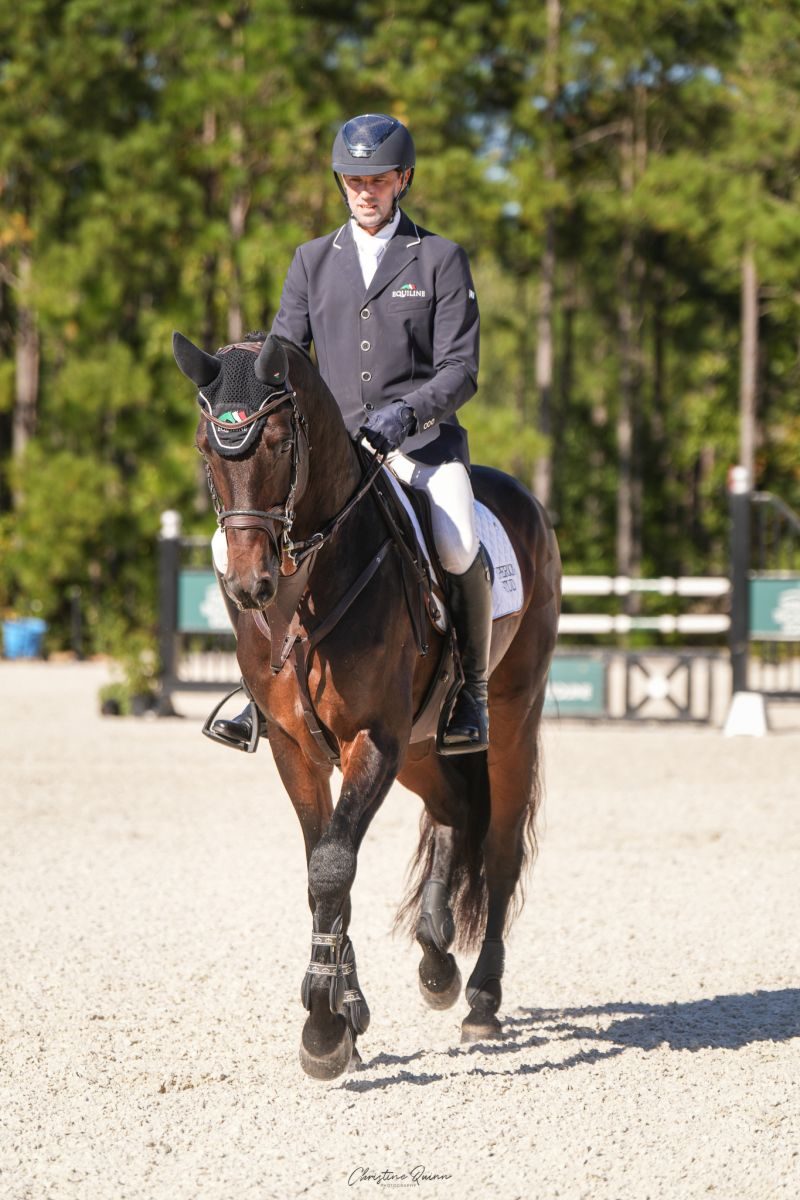 Will Coleman and Chin Tonic HS take a 15.7 into today’s cross country. Photo by Christine Quinn.

A quick note on the 3*-S: Team USA rider Will Coleman slid back into stateside competition with a cool 15.7 on the flat with Hyperion Stud’s Chin Tonic HS. And yes, we’ve asked for video!

We can expect more than a few of these pairs to be more using tomorrow as a prep for a fall destination, so time penalties on cross country are to be expected. Nonetheless, it’s quite a challenge Capt. Phillips has set out for tomorrow. We were able to obtain a narrative of the course — which can be viewed with fence-by-fence photos on CrossCountryApp here (also, all levels can be found here) — from the designer himself, and we’ll let him take it from here:

The Log Box (1), Cabin (2) and Hammock (3) are a short warm up to settle riders’ nerves and put a smile on horses faces. 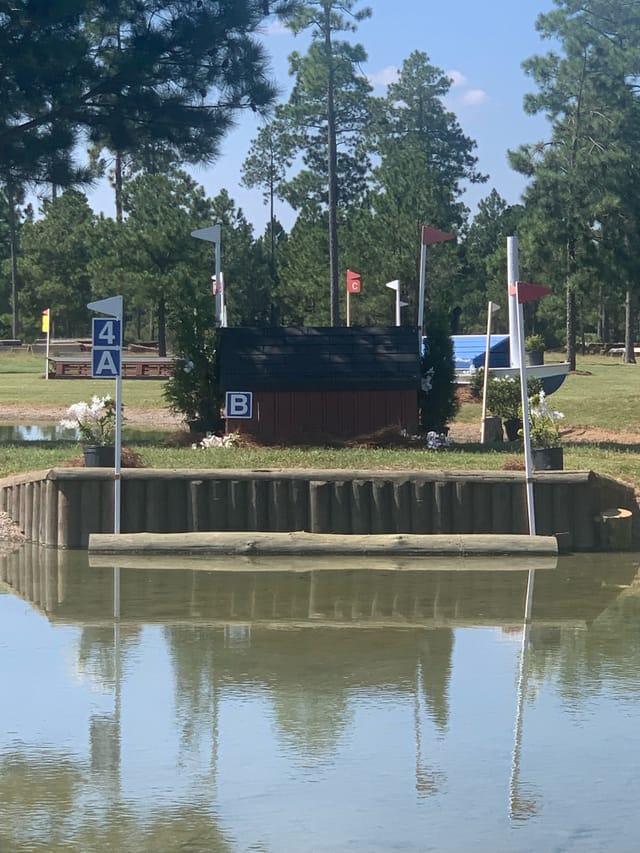 The first test comes early and involves a splash. Photo via CrossCountryApp.

The GL Williams & Daughter Water (4) gives horses an early opportunity to get their feet wet, but riders will need a good shot at the Step Up before sailing out over the Boat. 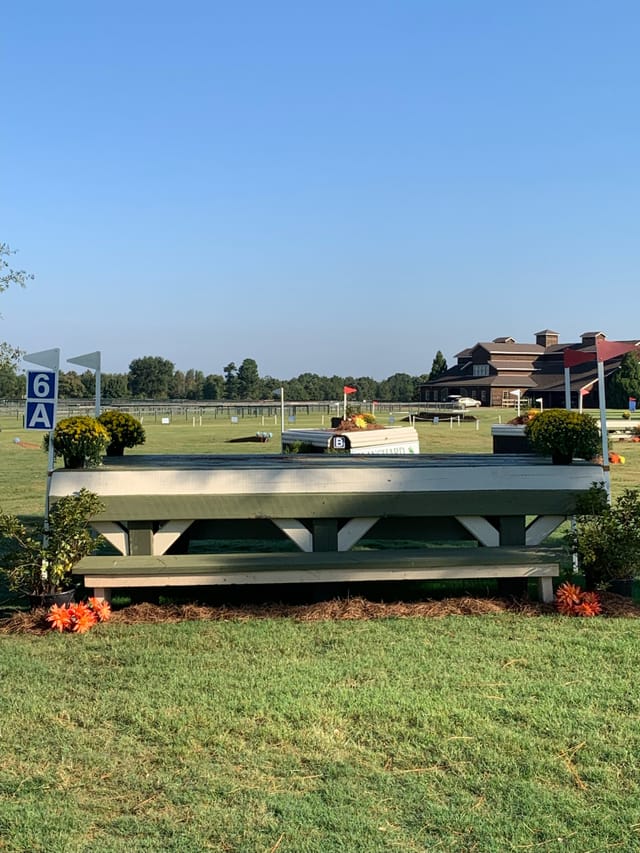 The Blanchard combination at 6AB will require commitment and bravery. Photo via CrossCountryApp.

The Metal Oxers (5) are large but relatively straight forward. The Blanchard Combination (6) in front of the Pavilion is a different matter, as riders will need real commitment for the three strides to the Corner.

The Derby Field Water (7) is a little speed bump and all will enjoy flying over the Cross Question (8). 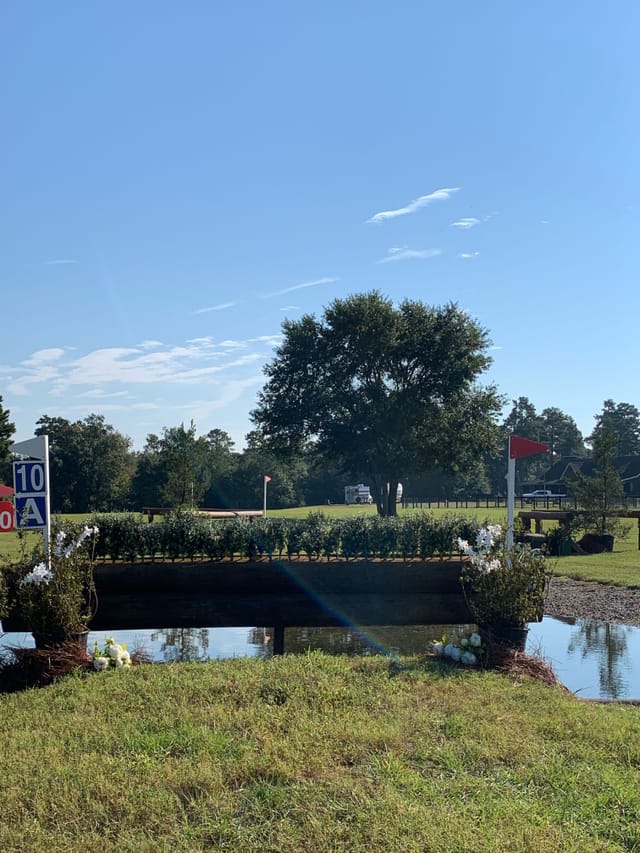 Horses then climb up to the massive Double Brush (9) en route to the Dog Kennel Water (10). The drop into the water is not too frightening but riders will need to take care at the MIM Rail Corner four strides later.

The Step Down (11) looks familiar but the angled rail one stride later is anything but easy. It’s then back through the valley over the Tiger Trap (12) before climbing up to the Derby Field Alp (13). The Brush on top looks massive and needs pace, but riders will need to take their time to the Brush Corner at the bottom. 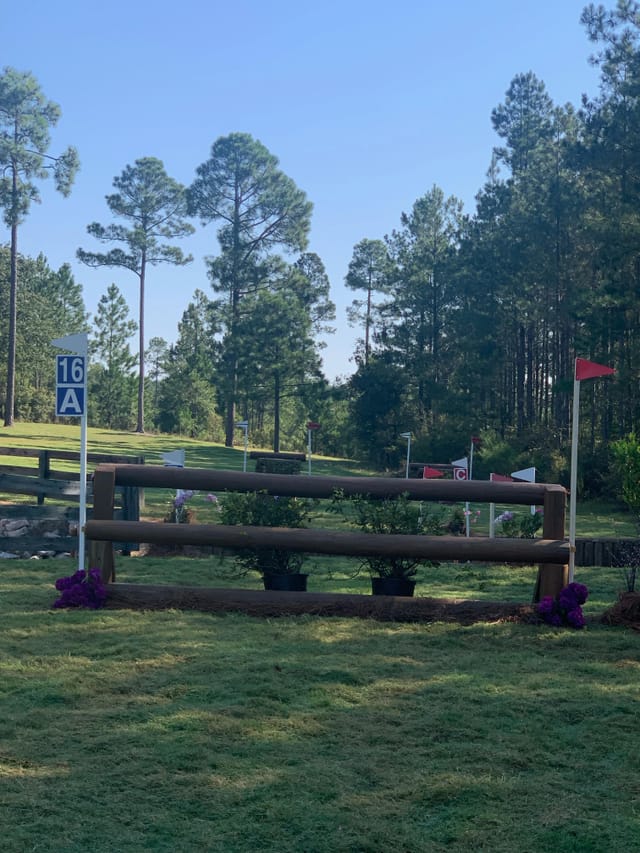 The Sunken Road at 16 will require “A” game focus from horse and rider, with a very narrow triple brush arrowhead coming at the end. Photo via CrossCountryApp. 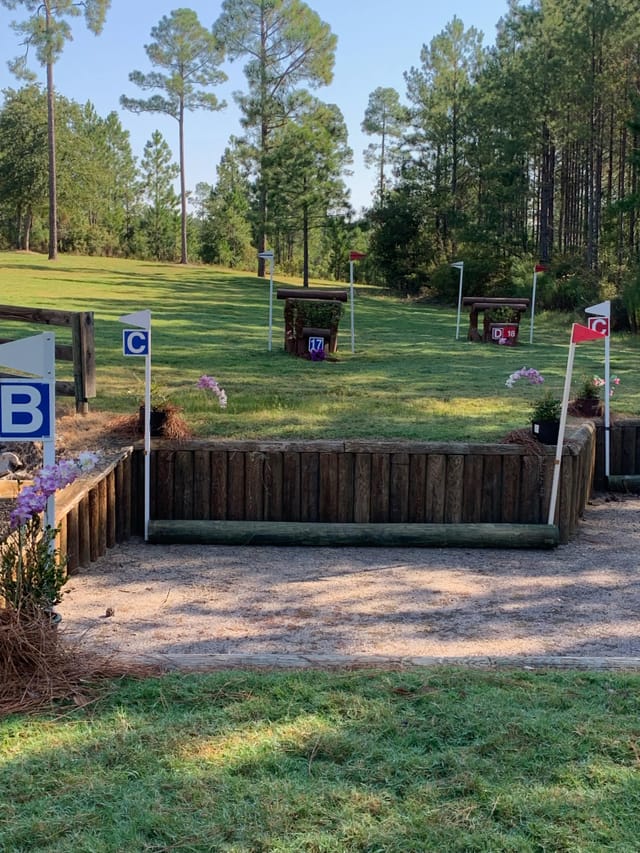 It’s then holiday time over the Hayrack (14) and Barry’s Desk (15) before coming to the daunting Sunken Road (16, 17) where riders will need to be on their “A-Game” for the Triple Bar. 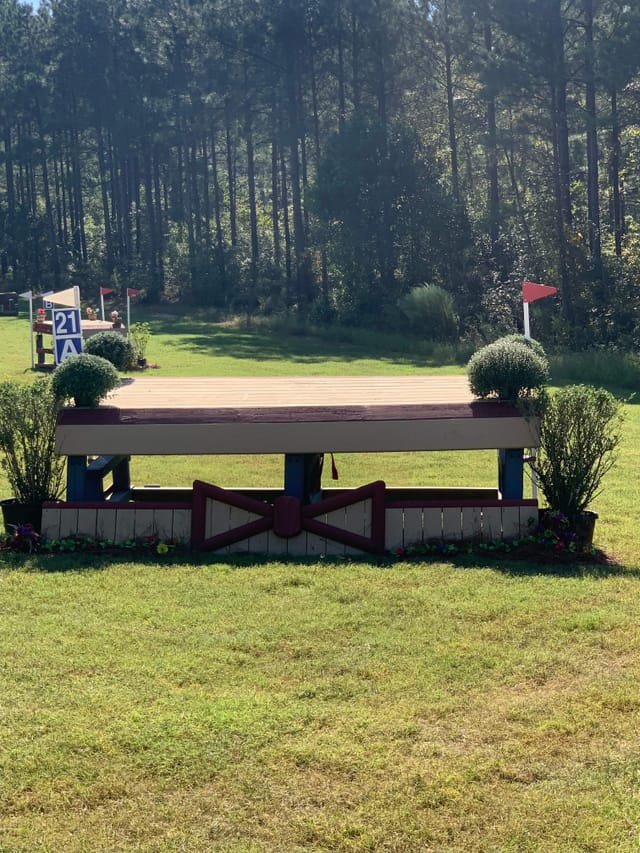 Final combination! But it’s not one to take lightly: riders will need to be on their line to make the skinny table at B work. Photo via CrossCountryApp. 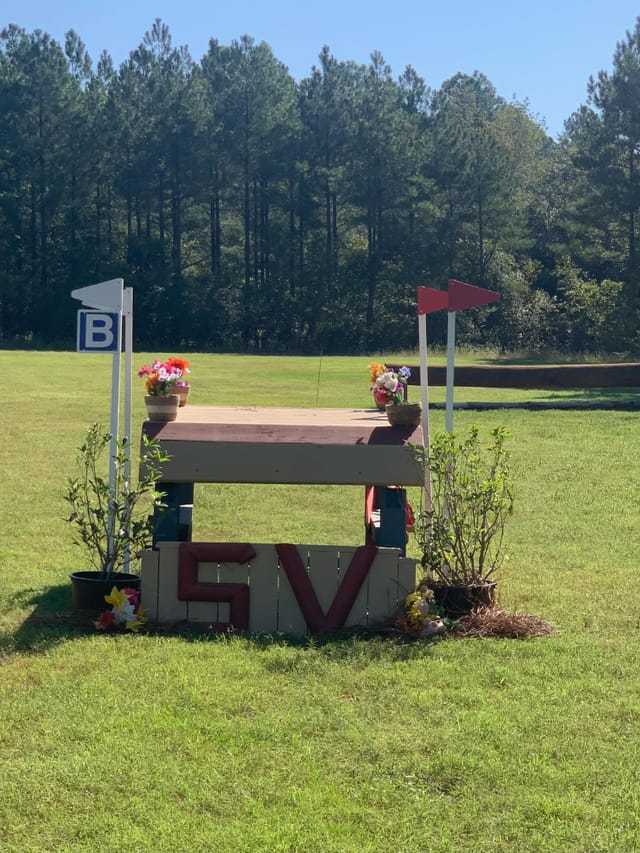 The Step Table (18) holds no fears in the Cut Through. The Chevron Table and Corner at the Academy Alp (19) looks impressive but should ride well. Riders can now start to think of home over the Aquaduct (20) and the MIM Tables in The Meadow (21).

Finally, the last climb up to the MIM Log Pile (22) and the run toward finish over the Diamond Brush (23) before splashing through the FITS Water to the Stable View Village (24) and the welcome sight of home.