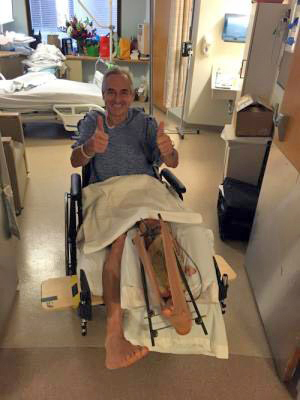 Two thumbs up from Carl! Photo courtesy of Stan Bouckaert.

We’re continuing to send our best wishes to Carl Bouckaert, who is on the mend after suffering a severe leg injury in a dirt bike accident at his farm at Chattahoochee Hills in Georgia last month.

Carl has since undergone 11 surgeries on his left leg, and doctors are optimistic after his most recent operation. He is currently recovering at Brigham and Women’s Hospital in Boston and hit a major milestone last Thursday when he was allowed to leave his bed for the first time since the accident.

Nothing can keep Carl down for too long! The Belgian Olympian represented his country at both the 2000 Sydney and 2012 London Olympic Games, plus two World Equestrian Games at Rome in 1998 and Aachen in 2006.

Carl’s son, Stan Bouckaert, and daughter, Nathalie Pollard, are posting updates on his progress to his YouCaring page, so you can follow along there for more information.

If you’d like to send a gift to Carl while he’s in the hospital, the family has requested notes, magazines or “brain games” to help him stay busy. Packages can be addressed to: Carl Bouckaert, Brigham and Women’s Hospital, 75 Francis St., Tower 12A, Room 11, Boston, MA 02115.