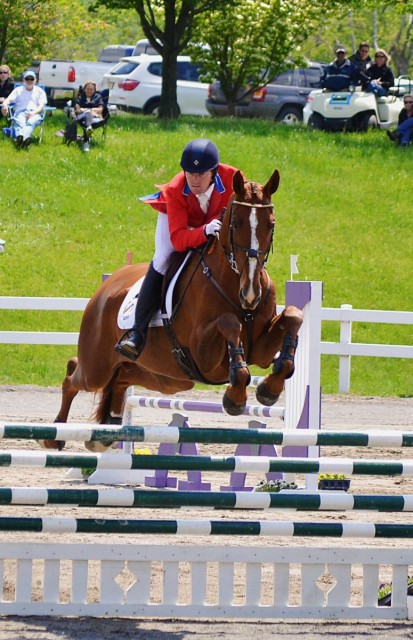 Riesling de Buissy on their way to a second place finish in the CCI2* at Jersey Fresh in 2013. Photo by Jenni Autry.

The CIC divisions here at Carolina International wrapped up the show jumping today, and the top three from both the one- and two-star divisions came over to the media tent for a quick press conference at the end of the day. The big story of the one-star is Will Faudree’s lovely ride, Riesling de Buissy, a 9-year-old French gelding. “P-Nut” suffered an unfortunate injury in 2013,  tearing a flap on the edge of his deep digital flexor tendon sheath, which required tenoscopy surgery, and spent the remainder of the season rehabilitating. “He was alright at Jersey, and when we got him home the tendon really blew up. Luckily I was close enough to NC State and had a very supportive owner, so I am really lucky to have had the support,” Will said. Will is a consummate horseman when it comes to rehabbing horses, so he meticulously and slowly brought P-Nut back from the injury.

“He’s a fun horse, and I have high hopes for him and his future,” Will said. “He’s a very good jumper. He was found by Katie and Henri Prudent in France, and they originally showed him to Phillip (Dutton). Phillip mentioned the horse to me, and it was kind of a right place at the right time situation.” This CIC* is Riesling de Bussy’s first full run back since the injury, and he is clearly feeling healthy and ready to go, as he goes into cross country tomorrow in second place behind Peter Barry and Long Island T.

Peter Barry took over the ride from his assistant trainer Colleen Loach on Long Island T this weekend, who moved up from third to first with a double clear show jumping round. Peter, along with the other riders, commented on the quality of the event here in Carolina, saying the cross country course asked a lot of good questions. “Maybe I’m talking out of league here, but outside of Rolex, I would consider this to be my go-to event. The quality of the courses I think trickles down,” Peter said of the well-organized Carolina International, which he believes is a great example of a fair, challenging event that offers something for everyone.

Doug and Jane Dudinsky’s Cellar Door have also had a rocking weekend. So far, this pair has added nothing to their dressage score to lie in third going into cross country on a 50.9. Cellar Door, or Little Leo as he is known at home, is one of Jane’s homebreds, and Doug said that the horse has made a lot of progress since they began their partnership. “The jumping has been a work in progress, so I was really pleased that he jumped well today,” Doug said. “He’s absolutely a dirt bike kind of horse. He doesn’t need a lot of time to set up, and it makes for a lot of fun on cross country.” Doug plans to keep Cellar Door at Prelim to ensure that he has all of the tools in his arsenal that he will need to move up. “I’d rather spend a little bit more time to make sure I have everything I need instead of pushing him. He’s a really nice horse, and I try to do my best to maintain him.“ 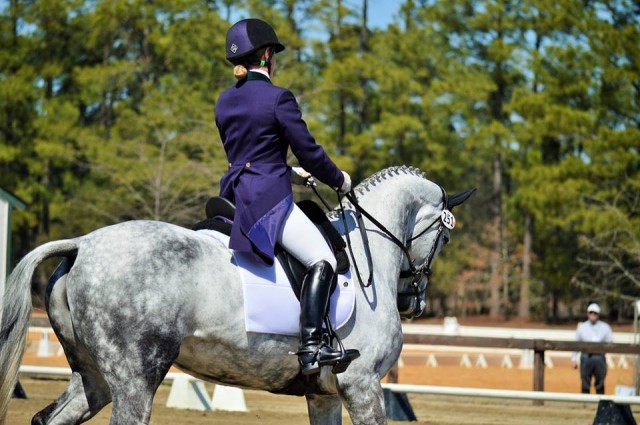 Emily Beshear and Shame On the Moon in the CIC2* dressage. Photo by Sally Spickard.

In the CIC2*, Leslie Law moved up from third to first after a double clear show jumping round, sitting on his and Fernhill Whatever’s dressage score of 49.4. Leslie is still getting to know “Winston,” and he thinks that the cross-country course tomorrow will really help them solidify their relationship.

Michael Pollard has enjoyed a successful weekend so far, sitting in second in the CIC2* aboard the 9-year-old Trakehner stallion Halimey. This horse was bred to event; his sire, Askar AA out of Hamamelis Go, is a Polish Anglo-Arab and was one of the last stallions to compete in the long-format Olympics in 1996, so the stamina factor is definitely in play with Halimey. Michael acquired the stallion last year and has since been working through some confidence issues. The pair moved from fourth to second to add nothing to their dressage score of 49.7. “He is actually a really careful jumper; he’s got good power,” Michael said. “It’s more about keeping his feet moving and coming off the ground, and when you do that, he actually jumps pretty well. I think he’s got it in him to be a really good horse, but I just need to be careful not to overface him.”

Emily Beshear and Shame On the Moon had a solid go-round in the show jumping today as well. They ran into a bit of a blip when “Delta” peeked at the second liverpool on course and knocked a rail. “She wants to be careful, but she can get a little unorthodox,” Emily said. “She’s not very solid in her technique yet, so she tries hard, but it doesn’t always work out the way she wants. I’m trying to make that a little more solid going forward.” Emily plans to get a good confidence-building round for Delta tomorrow on cross country. She, like Leslie and Fernhill Whatever, is still forging a new partnership with Delta and is excited to get the mare out for a good run.