When you pull up the FEI record of the current 7-year-old leader at this week’s FEI WBFSH Eventing World Breeding Championships in le Lion d’Angers, France, you’re met with a wall of first-place finishes.

One win on German young rider Anna Lena Schaaf‘s record with the stunning Lagona OLD came right here at this venue, in 2021 when she led wire-to-wire to win the 6-year-old championship. This year, the pair went in to lay down a superb 18.6 to start this return tour in familiar position.

Despite the fact that Anna Lena hails from a long family lineage of top-sport breeding and training, Lagona OLD (Lavagon – Ile de Cartina, by Cartani 4) is a bit an outlier in this respect, having been purchased by Anna Lena as a 5-year-old in 2020. It’s proven to be a beneficial choice, and the pair has done nothing but improve on the form shown here last year in the intervening months: they’ve won four times in six international starts and have yet to finished outside of the top 10. And while this will be the Oldenburg mare’s debut at the Long level of this step up, she’s following the same pathway that led her to a debut at the 2*-L level in 2021 — albeit, she admits, with a bit more pressure this time around.

“I have a bit of pressure now,” Anna Lena said. “Because I think last year, I was here like a small girl and nobody knows me and it was like, okay, maybe she can do the cross country, maybe not, after the dressage, but this year it’s a bit more pressure.”

That pressure doesn’t keep Anna Lena from feeling proud of her mare, who she says has made improvements in all three phases in the last year. “I think she really learned a lot here, and she really enjoyed it here with all the crowd and the difficult jumps here and beautiful design,” she explained. Despite some fiery mare moments in the warm-up, Lagona settled in to earn sensational marks from the judging panel of Andrew Bennie (NZL), Joachim Dimmek (GER), Anne Keen (GBR). “She was really concentrated and she has really good movement. I had a really good feeling during the test and she was really with me — I can only sit and just let her go, so that was really good.”

Second in the early going for the 7-year-olds and unseating the Thursday leader is reigning Olympic champion Julia Krajewski, who brings forward the full brother to fischerChipmunk FRH, Chintonic 3 (not to be confused with a similarly named Chin Tonic HS piloted by Will Coleman!), who was fifth here in the 6-year-old division last year.

A much shorter-statured horse than his brother, Julia says Chintonic shares a similar, eager-to-please cuddler personality with his brother but is otherwise different to ride — “probably because of their size difference,” she notes. Today’s test earned the pair a 21.6, improving on their 2021 score of 27.9. Strength, Julia says, is the biggest thing Chintonic has gained since his last trip here.

“He has become way stronger, he’s way more able to carry himself,” Julia explained. “He’s still obviously developing — he’s a very short horse, so it’s not the easiest for him to be really open. But he always wants to please, he always wants to really do the right thing and that’s something very important in a horse, I think, if you can say that. Last year he was super wobbly, so he really got way stronger.”

Julia admits she felt “a bit insecure” going into her test today, as Chintonic displayed some tension during arena familiarization that she hadn’t yet felt from him. “I was a bit surprised yesterday for arena familiarization. I think he remembered the prizegiving from last year!” she explained. “He got really tense…Then I would have to say I was really, really proud of him that he basically went into the arena and really concentrated and tried to do his absolute best.” 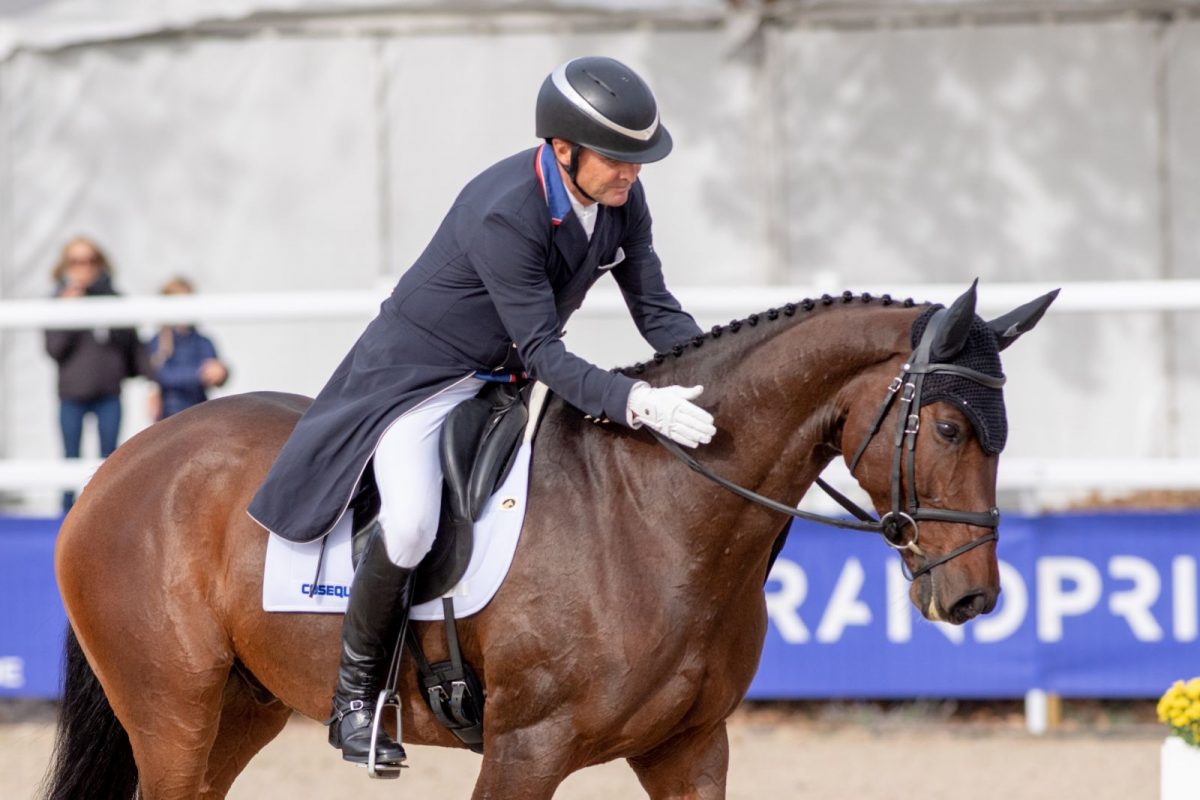 The remaining U.S. pairs also did their dressage tests today to wrap up the first phase of competition. Phillip Dutton is the highest-placed of Friday’s 7-year-old bunch with Ann Lapides, Caroline Moran, and Neill Sites’ Denim (Dinken – Celia II, by Ibisco xx), scoring a 26.3 to sit in 13th after dressage. The Holsteiner gelding is a relative newcomer to Phillip’s string, having been sourced by Carol Gee and originally campaigned by Merel Blom. Denim came to Phillip in March of this year — he competed here at Le Lion with Merel in 2021 as a 6-year-old — and has since collected a slew of impressive placings. The pair were second in the 2*-L at Bromont in June, and this will be the gelding’s first 3*-L. 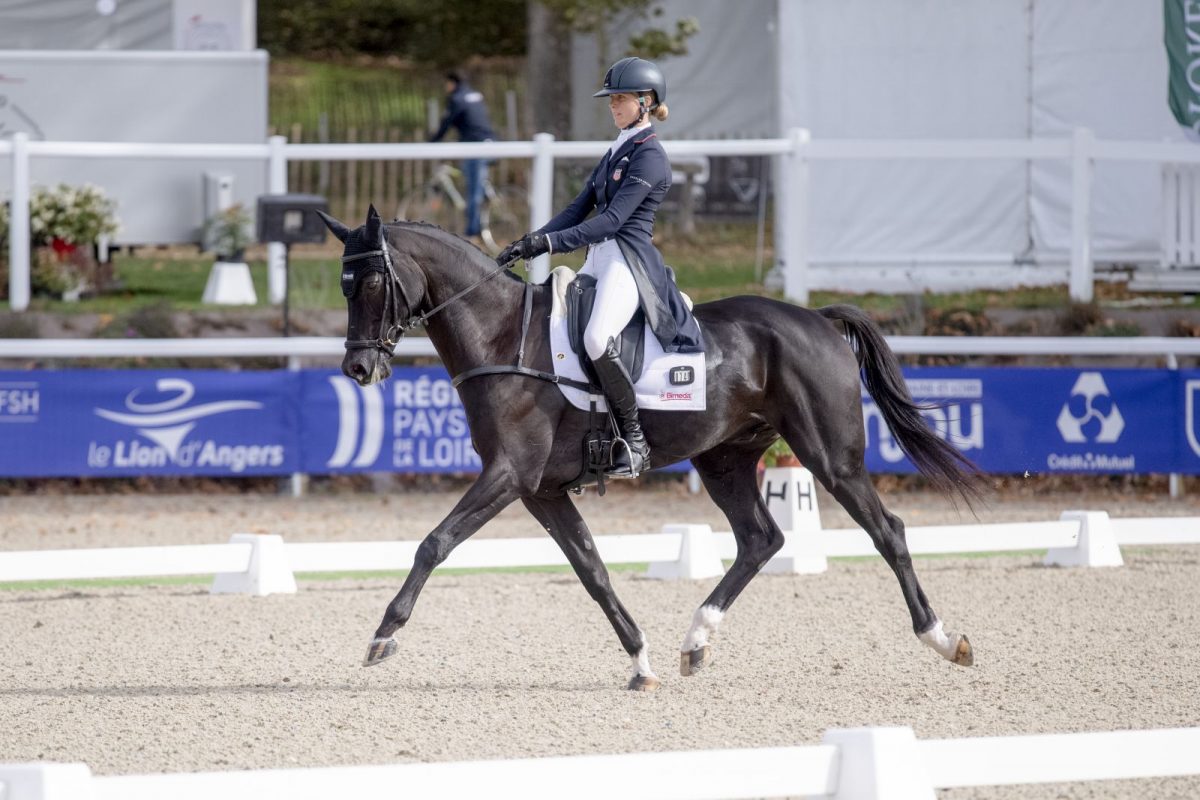 Caroline Martin piloted her 7-year-old partner, HSH Blake (Tolan R. – Doughishka Lass, by Kannan) to a top-20 27.4, the second-best score the Irish gelding has earned at the 3* level so far. This is the horse that has now been awarded the Holekamp/Turner Le Lion d’Angers Grant after Caroline opted not to bring original awardee Kings Especiale this week (riders are only allowed two horses at Le Lion, so she was always going to have to make the tough decision not to bring one of her original three entries). 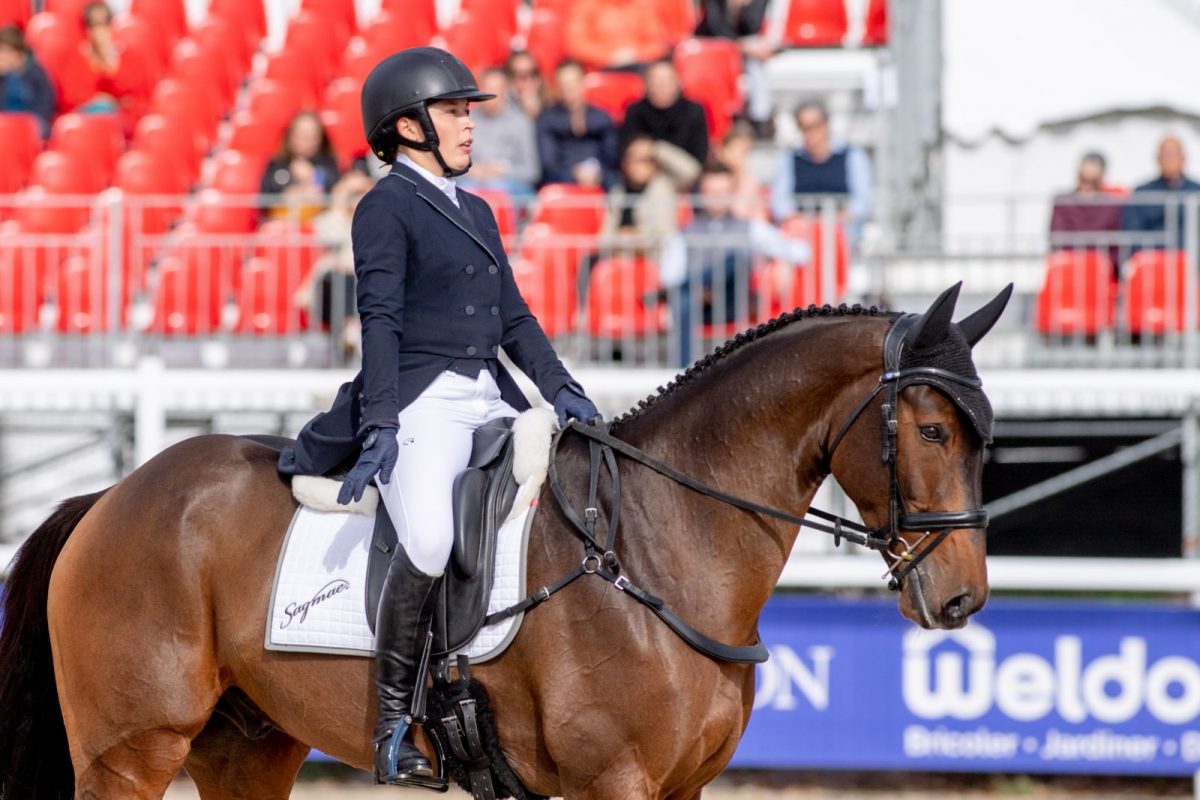 Lucia Strini and Keynote Dassett fell a bit victim to the atmosphere at this venue today, scoring a 42.6 but powering through to move on to the jumping phases. Things came a bit undone for “Wilson” in the canter work in particular, and it’s important to remember that most horses — perhaps in particular those coming from the U.S. and its relatively quiet events — have not seen this level of atmosphere yet in their young careers. It’s excellent practice for bigger events yet to come, and this pair will be one ready to get out there and get it done tomorrow. 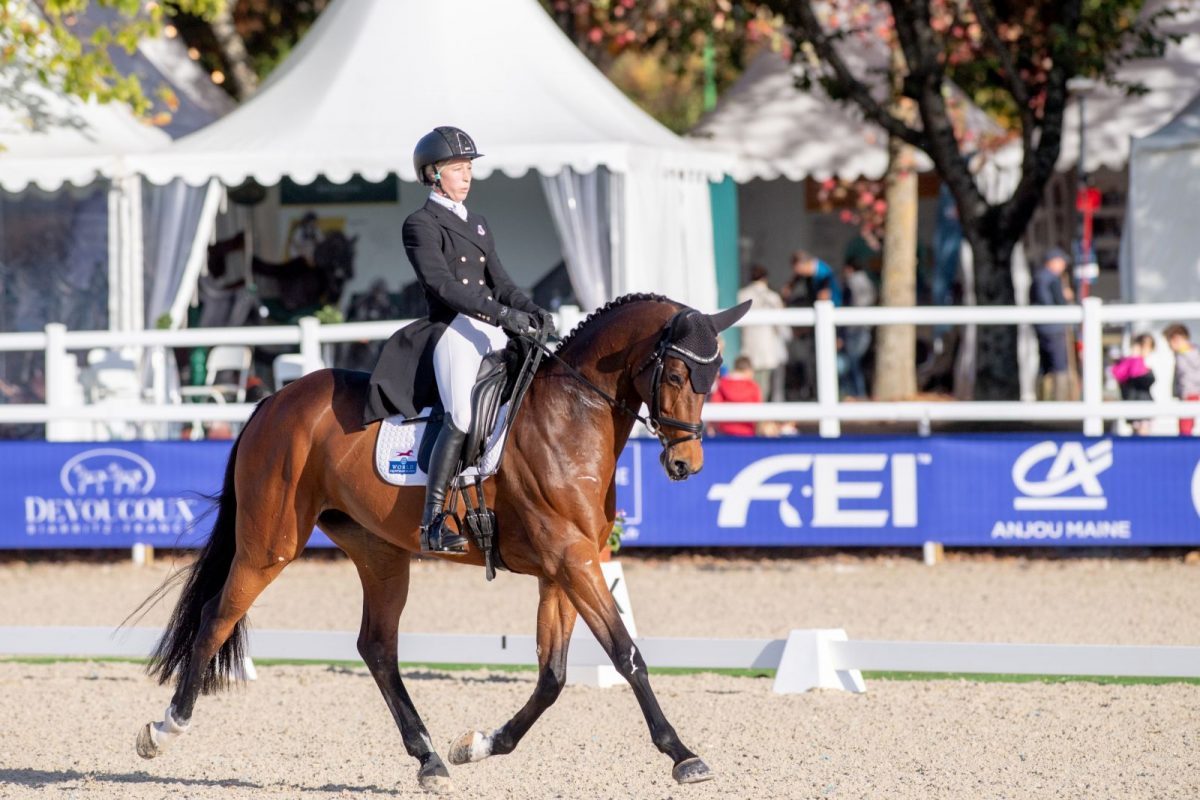 Dressage also concluded today for the 6-year-old 2*-L championship, and Caroline Martin will remain untouched from her Thursday lead with HSH Connor. Best of Friday’s bunch were Brazil’s Marcio Carvalho Jorge and Barratt Eventing’s Linkin Park K (dig the name), a KWPN gelding by Emir R. This pair’s 28.5 is good for sixth overnight, leaving the bulk of the top 10 otherwise unchanged from Thursday.

Cornelia Dorr rounds out the North American crew with the absolutely precocious Zangersheide mare DHI Qyracolle Z (Quinar Z – Celiacolle Z, by Chellano), scoring a 30.6 to sit in 16th overnight. This pair began their FEI career together this year with a bang, winning the YH2*-S at Millstreet in June. This is the first Long format for the 6-year-old.

We now look ahead to what Pierre Michelet has up his sleeve on cross country tomorrow. Le Lion’s course is well-known as being absolutely stunning in terms of presentation, and this year’s offering is no different, with fences paying homage to the upcoming Paris Olympics decorating the track. Pretty fences aside, though, there is plenty of challenge in true Pierre style (think the suck it in and pray type, but appropriate for younger horses).

“I’ve ridden here a few times, so I sort of know what to expect from Pierre here,” Liz Halliday-Sharp said. She’ll take the 7-year-old Shanroe Cooley, owned by Ocala Horse Properties, out on course at 2:20 p.m. local time / 8:20 a.m. EST tomorrow (October 22). “It’s very much Pierre’s track where he leaves a lot of room for interpretation from the riders. There are a lot of bending lines where you can make a decision versus it being right in front of you. He’s made it tricky enough, but with room for interpretation. It’s a 9 minute 10 second course so that’s long enough for a seven-year-old. We’re lucky the ground should be good. And obviously the crowds are a big part of what is up for the horses to look at here too, so that will certainly be a factor and it will be the most ‘Dallas’ has seen. But he’s very brave. He’s got a huge stride, so I’ve been trying to organize places where maybe the numbers will be a bit different for me.”

Julia and Anna Lena echo this analysis, describing the track as insistent on line selection and straightness, but overall — as is generally the reception here — fair to the horses while still being an up-to-snuff championship track.

You can view the course, and each fence if you click on the fence number, here or by clicking the image below. 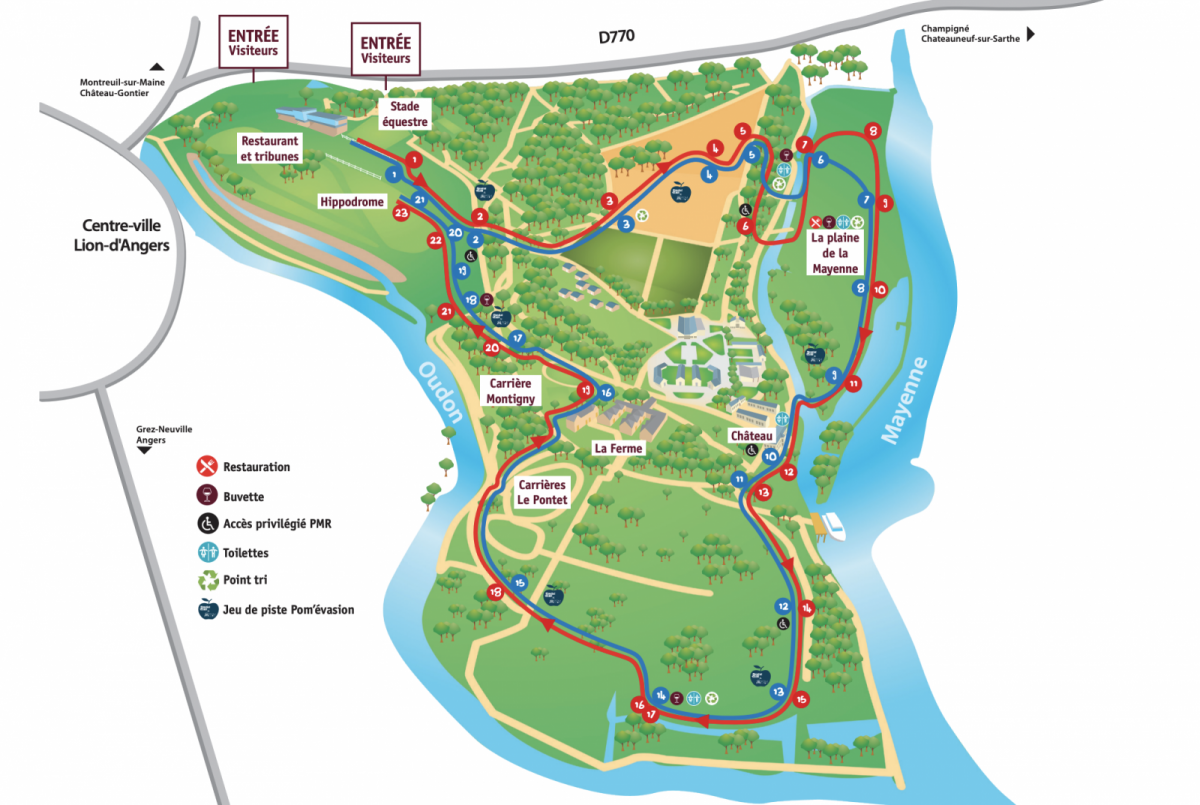 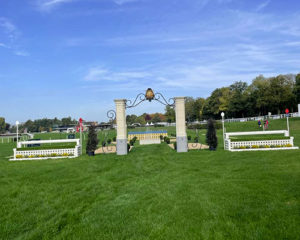 A homage to the upcoming Paris Olympics. Photo via Mondial du Lion. 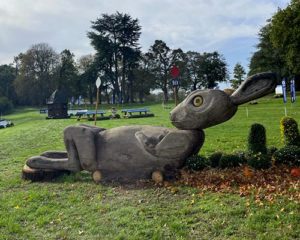 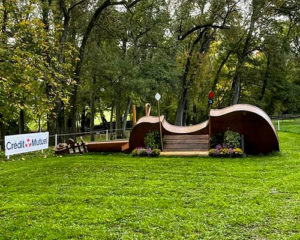 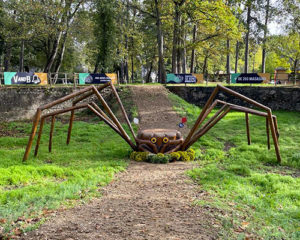 The Lion track is nothing if not a work of course building art. Photo via Mondial du Lion.

Full cross country start times can be found here for both divisions. There will also be a free live stream available via the FEI’s YouTube channel:

Enjoy some more social snaps from Friday in France: