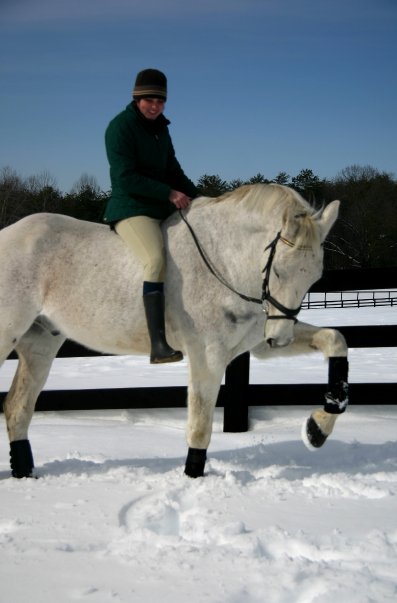 Alright, so John told me I should include setbacks in my blogs. Well let me just say the last few weeks have seemed like nothing but a giant setback. Just a few days after my first post, the snow started falling here in Virginia. I was trapped inside my house for 3 days straight, and we ended up having something close to 3 feet of snow after all was said and done.  And it didn’t stop there, because just a few days later we got more snow. I’ve actually lost track of how many days of snow we’ve gotten here, but the point is that it’s too much!!

We’ve had the privilege of using a local indoor arena that’s about a half hour drive from the barn, but of course it cost money and is a pain to trailer somewhere to simply ride every day.  At least we have a little indoor at the barn that’s about the size of a 20 meter circle, and are able to do some sort of work in it. Now conditioning days have become 20 minutes of trotting in the indoor and then walking around the farm in 3 feet of snow. I will admit, walking around in the snow is pretty fun, but it gets old pretty quickly. The roads are covered in 2-3 inch sheets of ice so walking on the roads is no longer a possibility. Needless to say I’m coming close to losing my mind.

Emily and I decided because we don’t have the ability to really jump and condition our horses properly, we have moved our first events from Southern Pines I and II to Morven Park and Fair Hill instead. The theory is that it’s better to start later, than try to compete and not be prepared. I think we’ve got a good game plan, and I’ll just keep my fingers crossed that I can get in enough qualifying rounds to make it to Bromont in June. Normally I would have plenty to keep me busy during these down times of riding with college work…but I chose to take the semester off from school to focus on riding and training. Needless to say, since I’m not able to spend much time riding, I’m feeling slightly lost being a ‘normal kid’ with a lot of spare time. All I can hope for is that the snow melts quickly and that spring time really is just around the corner.