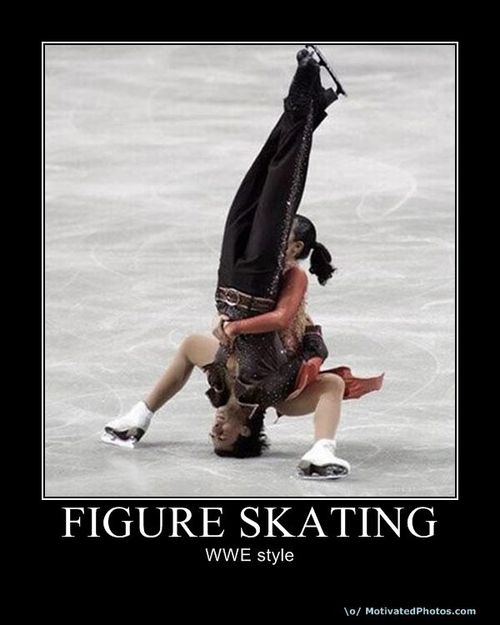 After our highly scientific data gathering poll, Visionaire’s tag-line “red on right, white on left, insanity in the middle” received twice the number of votes as the next highest “All courses: average for readers with some experience at this level.”  The later was probably my favorite, but a couple of commenters made a great point that our international readers might not get the joke, which is that the line comes from the USEA’s omnibus attempt at rating XC course difficulty.  We also had a couple of great suggestions such as Leslie’s “eventing news and equestrian views in the right stride” and Sarah’s “for those of us who have fallen off too many times.”  So, EN has a new tag-line and complementary flags to go on either side of our name, after all, red on right, white on left…
—-
As part of our award-winning Olympics coverage, I was wondering if any winter Olympic sport could compare to the insanity of Eventing.  So, to give us a perspective, here are a few category superlatives from the Winter Olympics.
Most dangerous-Watching some of the crashes in last night’s women’s downhill, I think the whole 70 mph smashing into a sheet of ice followed by a 500 ft slide down said sheet of ice is pretty freaking dangerous.  Honorable mention to speed skating because crashes involve rolling around with super-sharp blades that sometimes sever arteries.
Most expensive: Not having an intimate knowledge of equipment costs, I’m guessing that bobsleds are not cheap, and buying hockey pads for an entire team is probably expensive, but nothing comes close to horses.
Most pointless: I’m not saying that riding a horse around a dressage ring is completely pointless, after all it prepares us for collection and straightness in XC, which could theoretically be used to flee a murderer or as transportation after armageddon.  Sorry, curling, but you win, which is more than the US curling team has done yet.
Most ‘what were you thinking Mr. Inventor?’:  I understand that (like eventing) the biathlon started with the military, in places where they needed to shoot and ski to get around during winter, like Sweden, Switzerland, and Aiken.  But a sport like skeleton; who thought that up?  ‘I know, I’ll modify the luge so that my brain and spinal cord are where they can cushion my fall.’
List of Winter Olympic sports
So, I think the jury is still out, maybe this is a part 1, but eventing still feels like the most insane sport.
Go eventing.