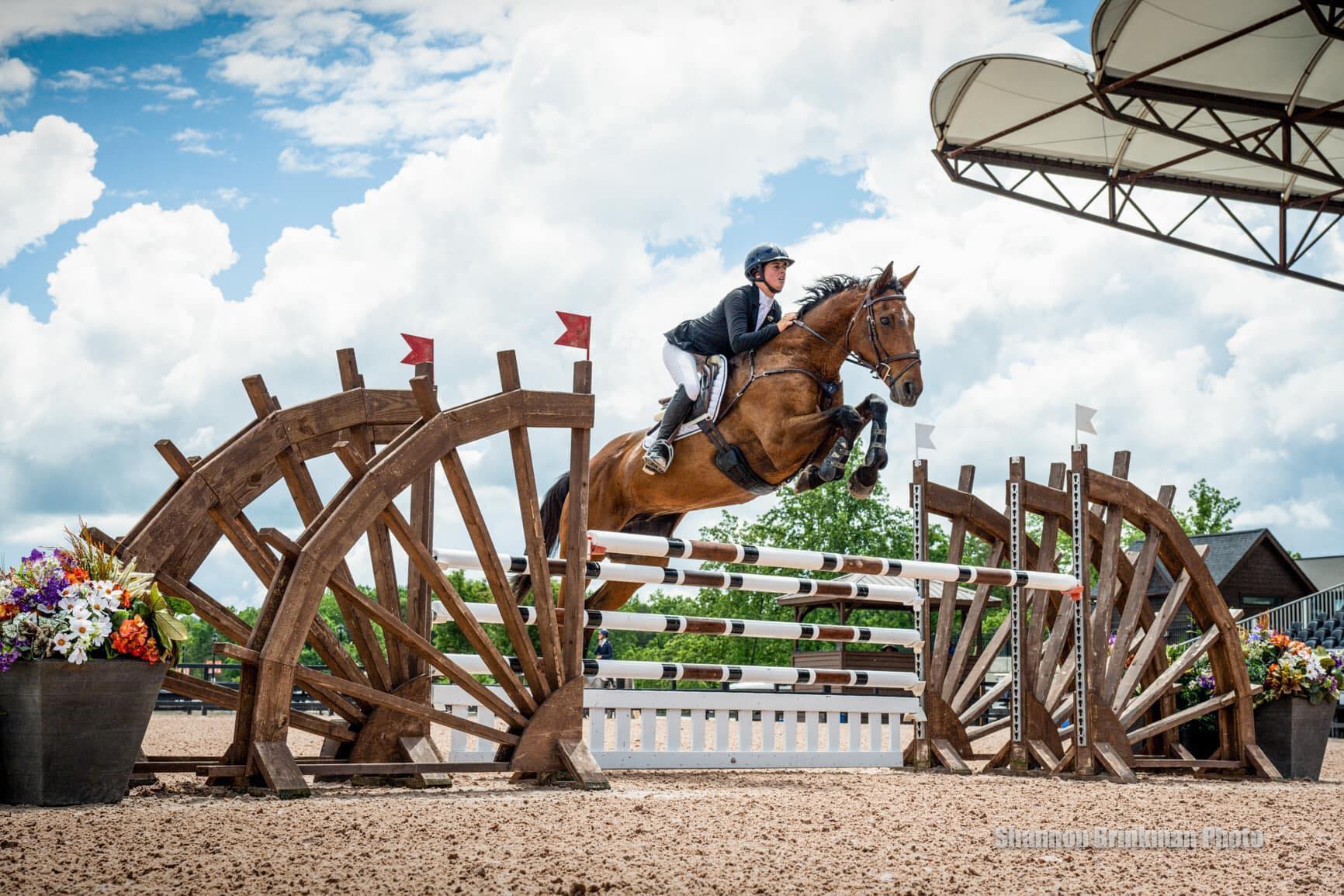 When a determined 14-year-old Cassandre Leblanc showed up on trainer Holly Jack’s doorstep, she didn’t speak a word of English and had one goal: to find out what she was made of. Seven years later, she was winning at the 2022 USEF Young Rider Eventing Championships.

As a young girl growing up on her mother’s horse farm, Cassandre knew that she wanted to ride professionally from a young age. She made the trip from Quebec to Holly Jack’s Ontario farm to see how she measured up outside of Quebec’s very small eventing community.

Cassandre didn’t let the fact that she didn’t speak any English deter her from spending the entire summer working with Holly. Summers at Holly’s farm have become a routine for her, and she’s been going back for the last seven years to compete, groom, and work under Holly’s tutelage.

Heading back home after her first summer with Holly, Cassandre couldn’t have known that a very special horse was waiting for her in her mother’s back pasture. Riffel was a homebred 10 year-old Percheron/Thoroughbred cross who had successfully scared off every single rider in her mother’s stable. Delegated to the back pasture, he had sat there for years, as no one wanted to risk getting on him.

Sadly, Riffel had mysteriously stopped eating. Desperate to get him to eat, the family had tried every trick in the book. Nothing worked until Cassandre came home. He would only eat if she sat in the stall with him and held the grain bucket on her knees. Taking it as a sign, Cassandre’s mother knew they would be a show-stopping pair and encouraged Cassandre to work with the troubled gelding. 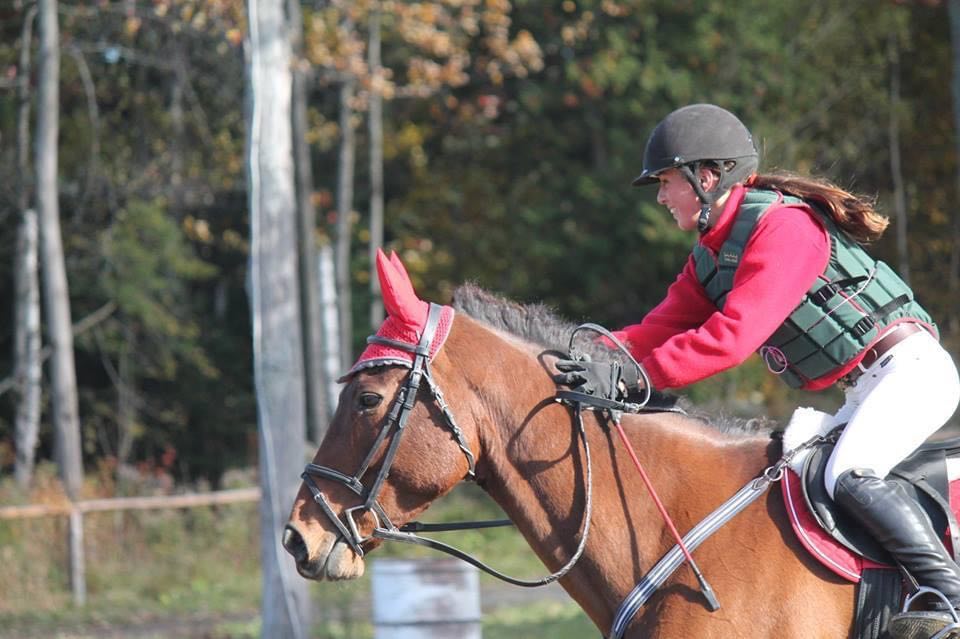 Treating his physical health wasn’t a miracle cure. “There was all this behavior stuff that he had learned for years. So, I just held on really tight to him, not letting him buck me off, and eventually, got him to be a real horse.”

Riffel had one more big obstacle in his way to becoming an eventing star: he was scared of jumping. After having a few bad experiences as a young horse, Riffel wouldn’t even enter the arena if jumps were set up. “I never thought I would get the horse jumping again. I would just set up a jump in the ring, and he wouldn’t want to walk in.”

But in November 2022 and hundreds of miles away from Quebec, Riffel was galloping towards massive tables and taking Cassandre around a 2* course. The road to get here wasn’t easy. It was filled with blood, sweat, and tears – lots of tears. Small issues with the show jumping phase snowballed until Cassandre was falling off regularly again. Feeling defeated, Cassandre made her first trip to Florida, seeking out more opportunities to practice her show jumping. While there, Cassandre rode several of Holly’s horses and got in the ring as much as possible.

Less than six months before her bronze medal win at the Young Riders Eventing Championships, Cassandre was thinking of quitting. “It just got worse and worse. I hit this bottom point where I was like, ‘I am done with this. I can’t do this. I can’t even jump a cavaletti properly.’ I was very desperate. But I kept trying — I wanted it so bad.”

On top of her show jumping woes, Cassandre also faced a financial barrier to getting to the Young Rider Championships. While she was qualified and had secured a spot on the team, she couldn’t afford to go. Cassandre had accepted this and held onto her faith that other opportunities would come down the line – but her family hadn’t. Holly Jacks and Cassandre’s sister worked together in secret to raise more than $5000 in 24 hours. After seeing their dedication, Cassandre knew she had to go. 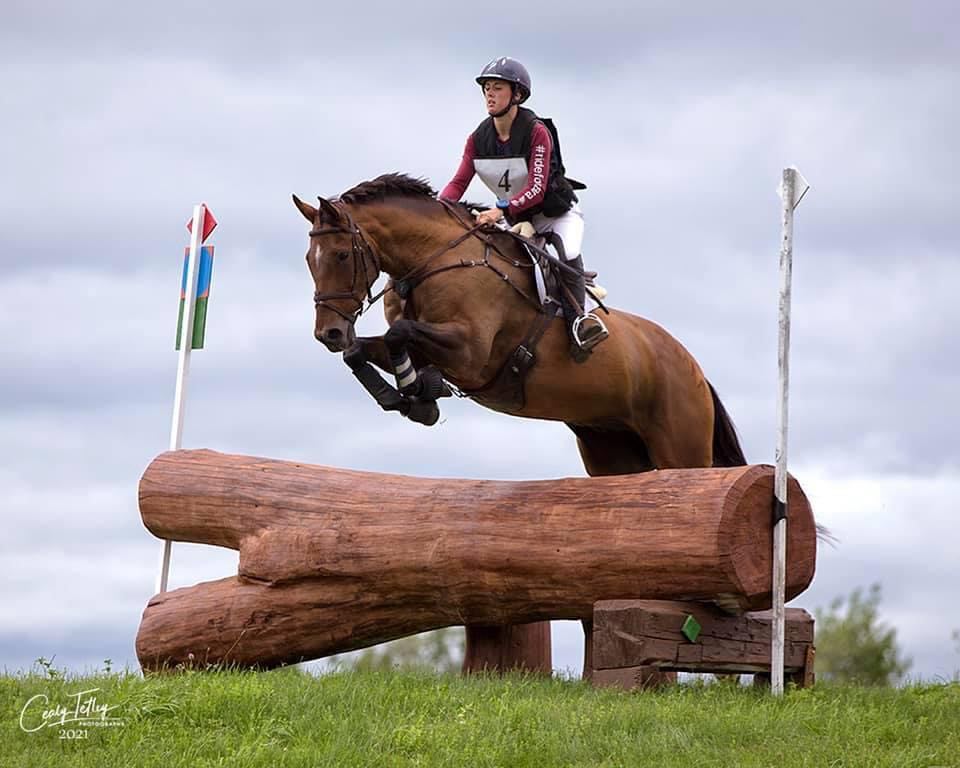 Holly and Cassandre’s sister weren’t the only ones who supported this young rider on her road to the Championships. Cassandre has close ties to the Zara Buren Foundation, who also provided her with a grant. “I knew Zara very well; I rode with her a lot when she was with Holly. Obviously, her passing was very hard for all of us. I stayed very close to her friends and family and we kept celebrating her every time we could. I kept wearing her colors and thinking about her a lot. And her mom called me one night and she said, ‘we’re going to do a special grant and we want to help you, because Zara would have been so proud of you and she would have wanted to go with you’.”

In a way, Zara was there with Cassandre, Riffel, and Holly at the Young Riders Eventing Championships. Cassandre wore her Zara Buren shirt all the time under her show jacket, to represent the presence of her friend whose memory and generous family helped to make Cassandre’s dreams come true.

Despite all of the barriers along her road to the championships, Cassandre’s perseverance paid off. Her and Riffel’s performance earned her an individual bronze medal and landed Team Canada with a silver medal. When asked what advice she would give for other young riders who hope to follow in her footsteps, Cassandre says, “Don’t give up and get back on. Surround yourself with people who believe in you and are ready to help you when you need it. That’s probably my best advice because I couldn’t have done this without the community around me.”